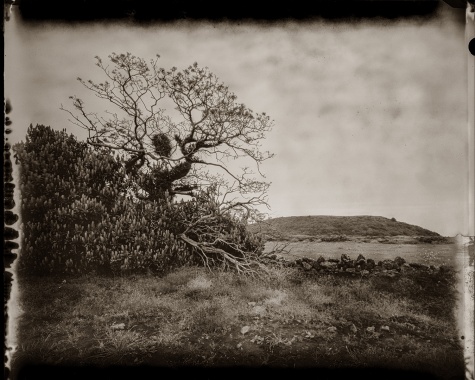 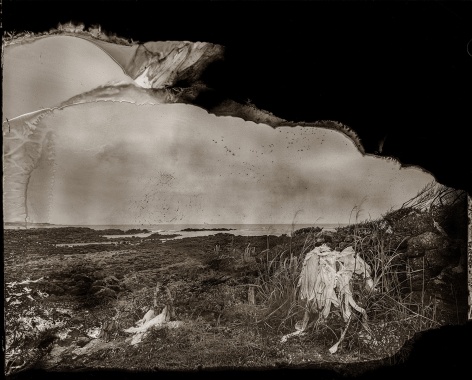 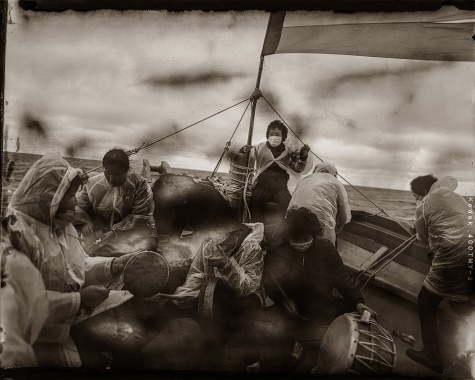 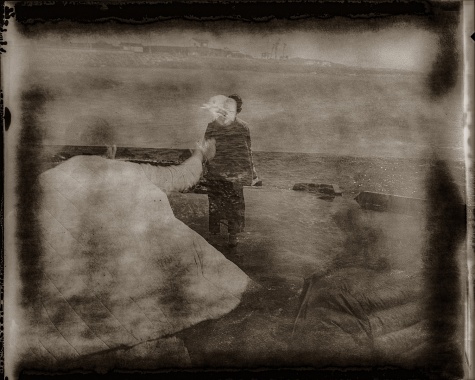 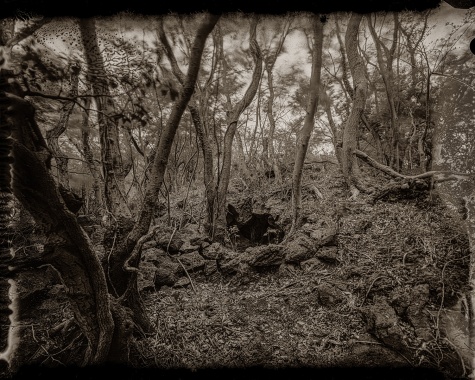 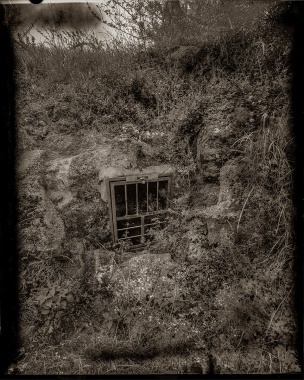 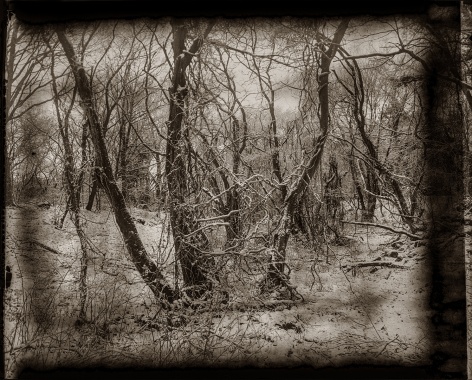 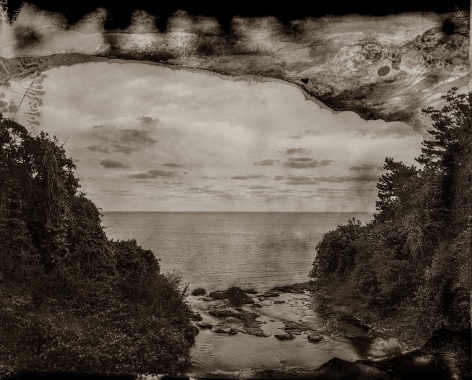 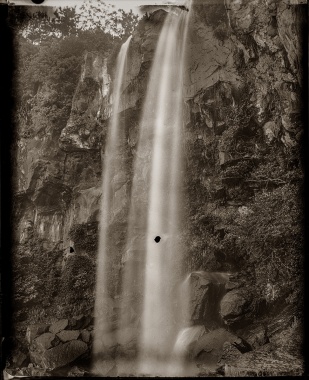 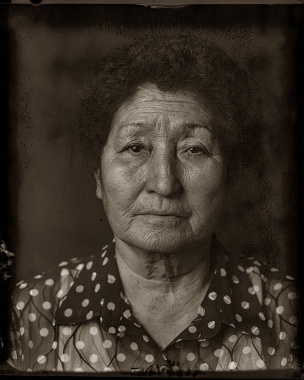 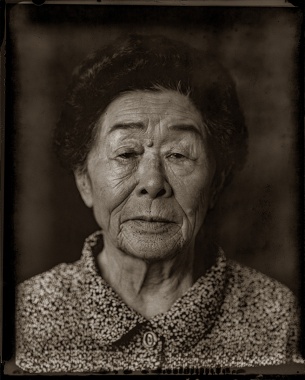 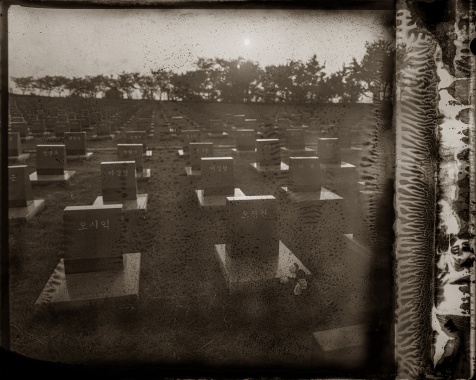 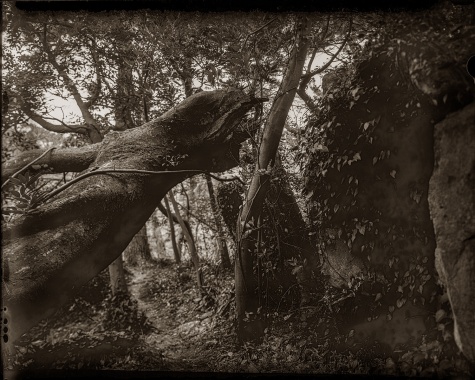 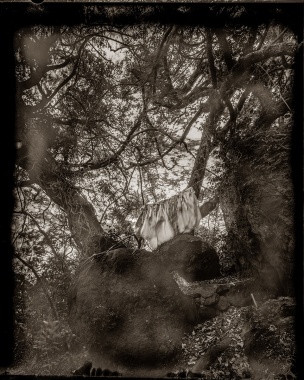 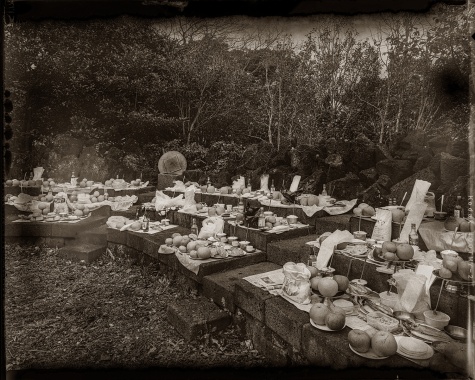 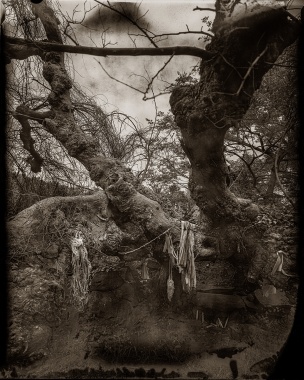 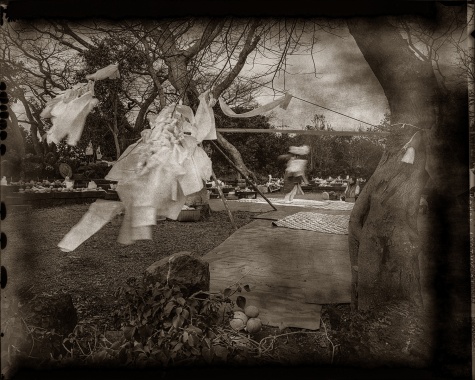 The massacre that first began on the South Korean island of Jeju, on April 3, 1948, was kept secret for a long time. Thousands of local people were killed, during an uprising against the local government instituted by the US Army. By using large and damaged Polaroids for his pictures, the Korean photographer chose an unusual form and imagery for this series, dedicated to the island’s grim history.

Landscapes with trees and waterfalls, portraits, but also memorials: Namhun Sung’s atmospheric black and white series is made up of a diversity of motifs. The common thread through them all, however, is the strange, damaged impression of the prints. The edges seem to dissolve away; stains and unsharpness make the motifs appear like aged objects, salvaged after a catastrophe. The images are current, though they refer to incidents that took place on the South Korean island of Jeju over seventy years ago.

“Jeju Island is a place where the colossal myths and tragedies of life coexist and overlap.”

After decades of Japanese colonialism, the inhabitants of Jeju became extremely dissatisfied with the local government, imposed by the US Army, after the Second World War. In March of 1948, an armed uprising was carried out by the islanders against the government’s brutal repression, and was violently defeated by Korean troops, helped by the American occupation army. Over the following seven years and seven months, around 30,000 people were killed; the scorched earth strategy wiped out entire villages. The genocide-like massacre was subsequently suppressed and kept secret, and any memorials to the crime were forbidden. It was only a few decades ago that people were permitted to remember what happened – and a long period of processing began.

“This presentation is like a photographic ritual, weaving the past to the present in a documentation, similar to the shamanic ritual of reposing souls.”

The victims left behind suffered from deeply painful memories, and even before the tragedy was officially acknowledged, efforts were being made to bring them comfort and relief: during his research about Jeju, Sung learned that shamans had been carrying out secret rituals of religious offerings: the photographer makes reference to these, so-called, Gut rituals, in his own unique form of visual documentation. The Polaroid film he used to photograph the families of victims and massacre sites was damaged in an uncontrolled manner: “I was able to combine black and white film and paper images at the same time, using a large 4x5 Polaroid film. Although it was difficult under the changing climate conditions, during the two to three minutes of developing time, the Polaroid images were damaged by pushing them on trees and rocks at the sites where the pain and memories are imprinted. The unpredictable outcome for the 4x5 film was completed by scanning,” Sung explains. Thus, photographs and memories come together to form an impressive symbiosis in his series. “The intention lies in capturing the uneasy history of our nation, through the insecurity of the Polaroid image, while sharing and healing the pain of the past,” says the photographer.

Nowadays, the island is a popular tourist destination; in many places there are no longer any recognisable traces of the local inhabitants’ dramatic history. The photographer wants his work to give a certain memory back to the people and to their history. “I hope that, using photography, we can remember the forgotten beauty of the original island of Jeju, empathizing with the pain that needs to be healed and daring to look back on our history.”

“This photographic series questions the fallibility of history that cannot be wholly reproduced with one single photograph; it also calls to mind things that should be held on to more strongly, the more they fade.” 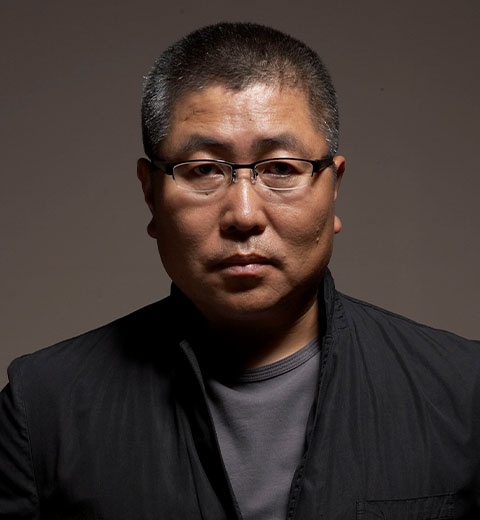 Namhun Sung was born in Jinan, Jeollabuk-do, Korea, in 1963. After studying Business Administration at the University of Jeonju, he studied Documentary Photography at the Icart Photo École de Photographie de Paris from 1990 to 1993. He began working for the French Rapho Agency in 1994, and has been a member of the Dream Flower Photo Group, since 2012. The work of Namhun Sung has been exhibited internationally, and he has received a number of awards. He plans to continue and expand on his project about the island of Jeju. “With the dream for a unified nation, I hope to one day record one whole nation,” he says.