This series by the Venezuelan photographer (born 1988) focusses on the appalling living conditions for women in jail. The motifs were taken at prisons in Venezuela and El Salvador, since 2017. Arévalo Gosen reveals the causes and consequences of imprisonment; not only for the women, but also for their families and Latin American society. 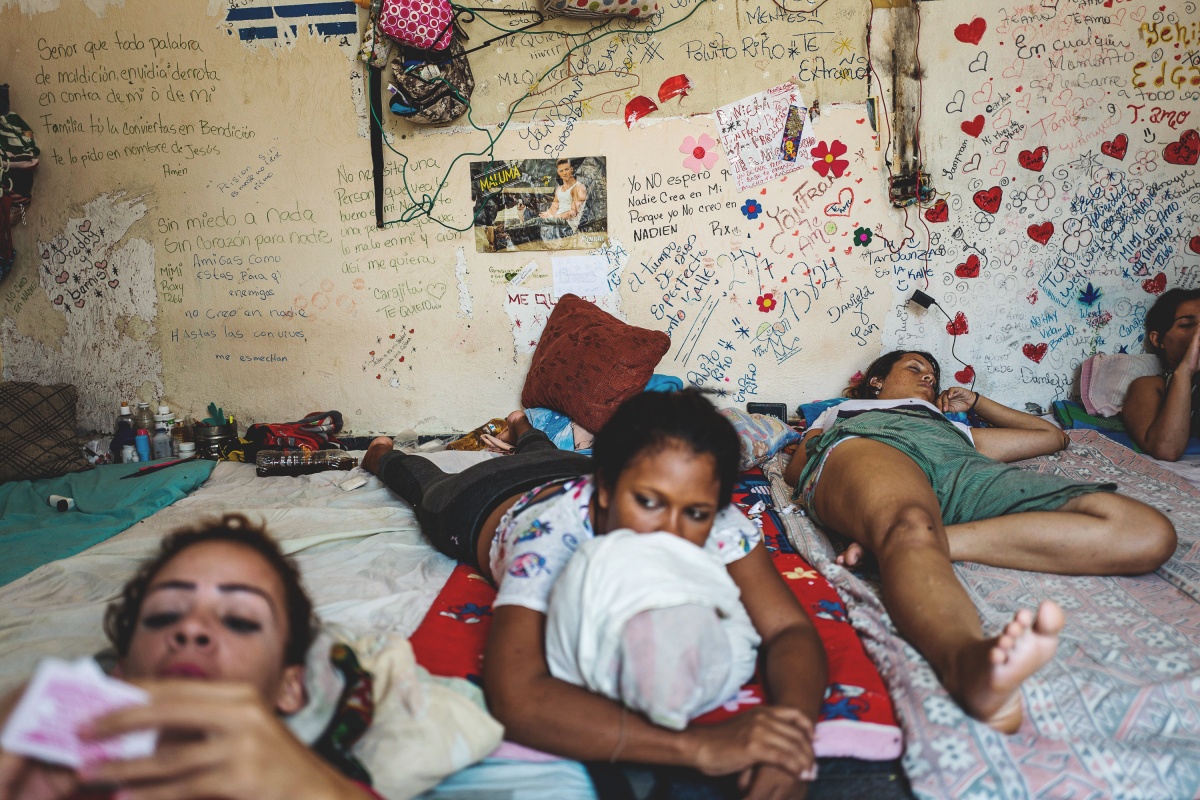 01
“Eternal days” is the description that one of the women, already on trial, uses to refer to the time that women spend serving their sentence inside this centre, instead of a state prison. Poli-Valencia, Carabobo, Venezuela. March 2018 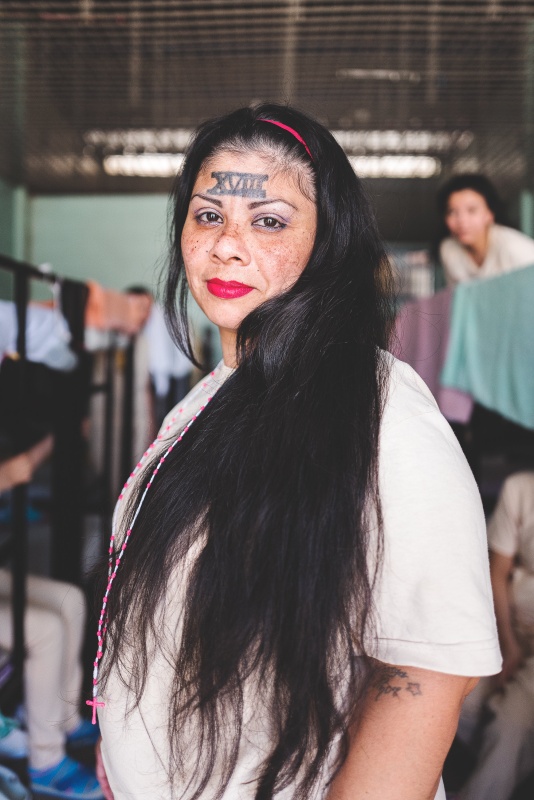 02
Sentenced to 8 years in prison, the tattoo on this woman’s forehead is the number 18 in Roman numerals. 18 is the name of one of the main gangs in the country. Ilopango, San Salvador. March 2021 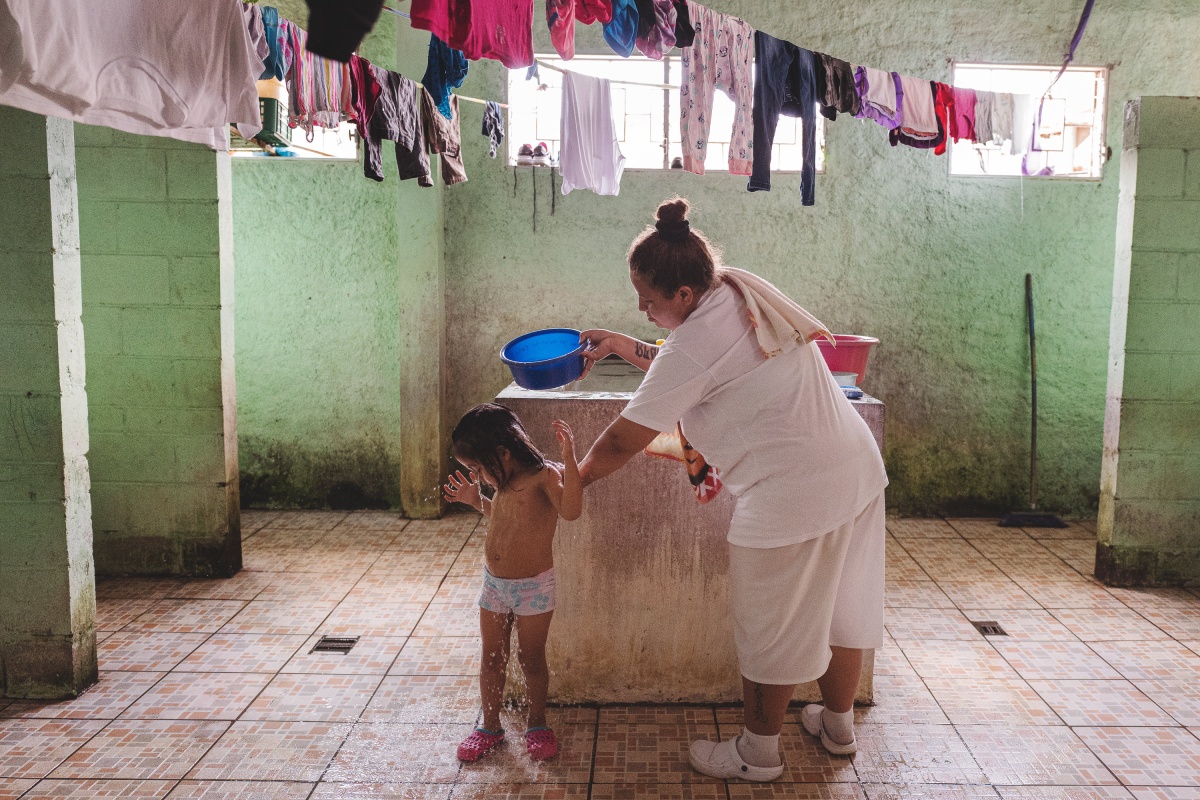 03
A woman bathes her child in the maternity sector of the 'Granja Penitenciaria de Izalco'; it is the only such sector for the entire prison population of El Salvador. Her son was born in the prison and does not know freedom. Izalco, El Salvador. March 2021 04
A religious service for inmates. The charismatic preacher sermonizes on forgiveness and reflection. The service was followed by a religious theatre play, and a shared meal. La Yaguara Detention Centre. Caracas. March 2018 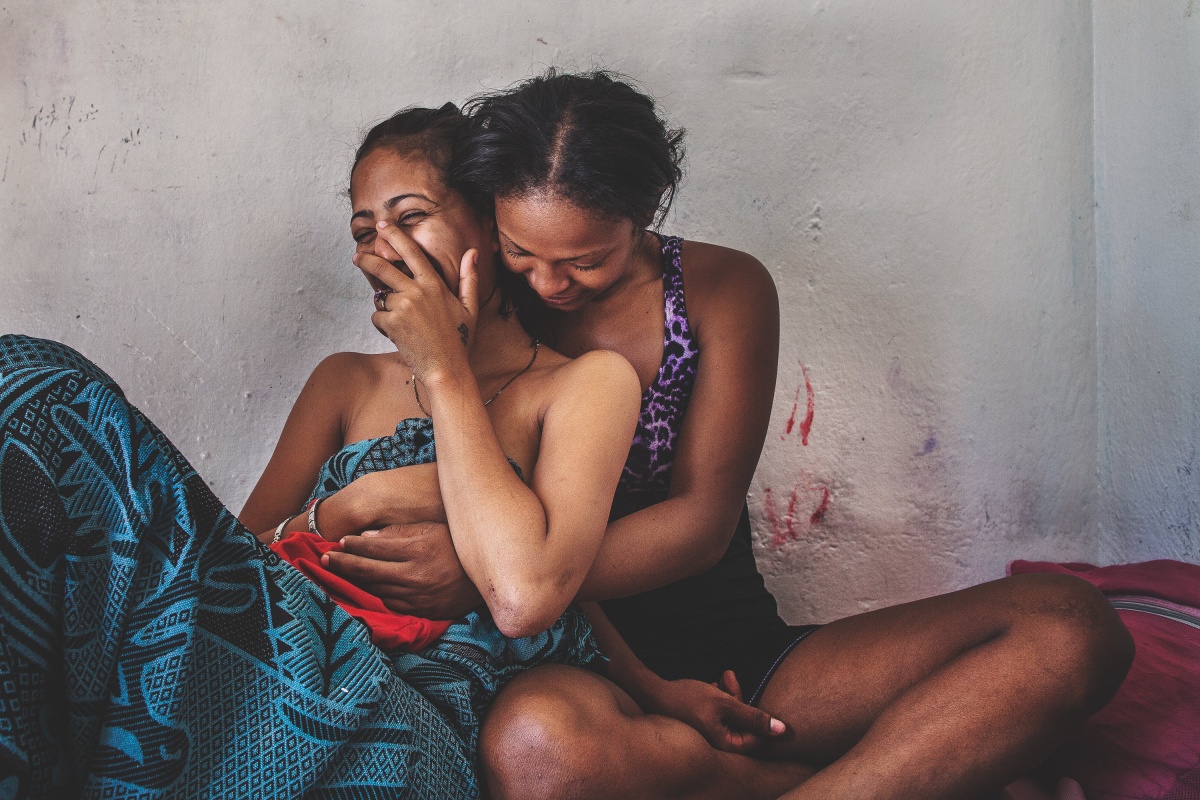 05
Two women laugh and hug inside a detention centre in Valencia. Forming friendships inside these detention centres is fundamental; the women protect each other and share food, which must be delivered by their families. Carabobo, Venezuela. January 2017 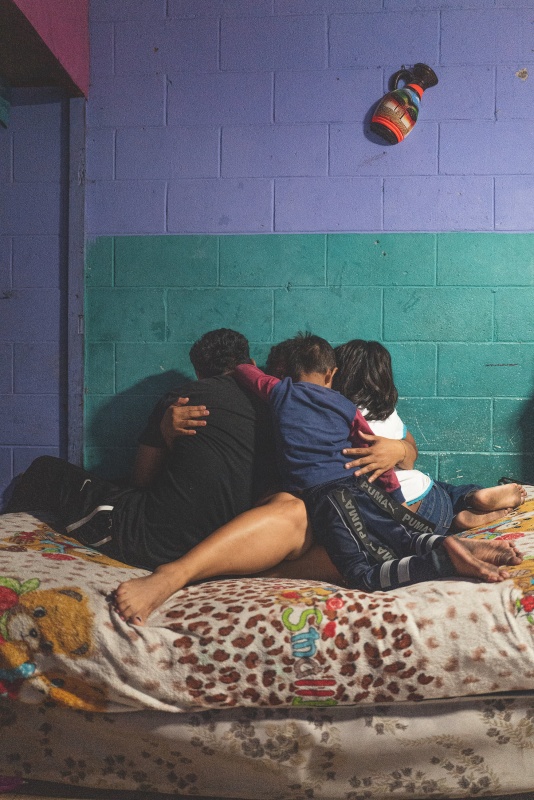 06
Polaris poses for a portrait with her three children, at a safe house in San Salvador, on February 19, 2021. She has been an active member of the Mara Salvatrucha gang, since the age of 13 07
La Osa, 41, poses for a portrait in a safe house in San Salvador. She became a member of the Mara Salvatrucha gang, when she was 15 years old. El Salvador. February 2021 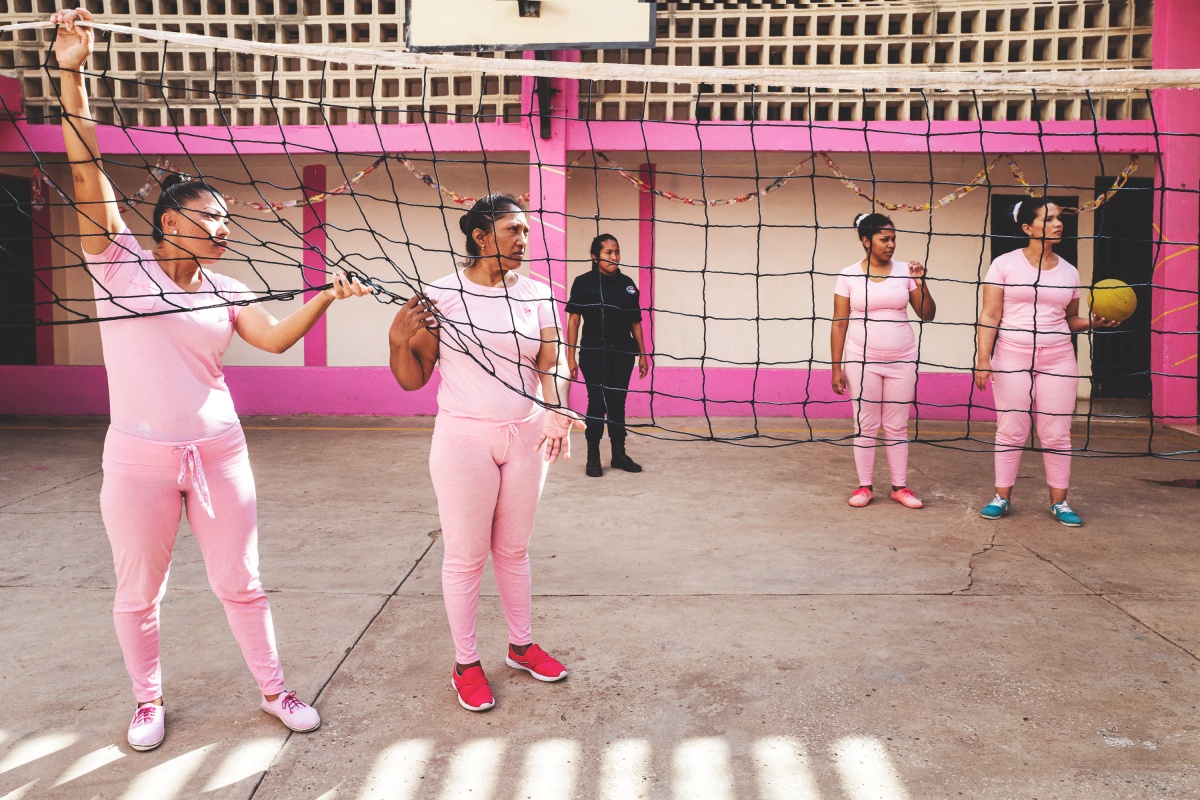 08
A game of volleyball inside a state prison in Maracaibo. The schedule includes playing sports; along with receiving classes, motivational and disciplinary workshops, and arts and crafts. Ana María Campos II Prison, Maracaibo. December 2018 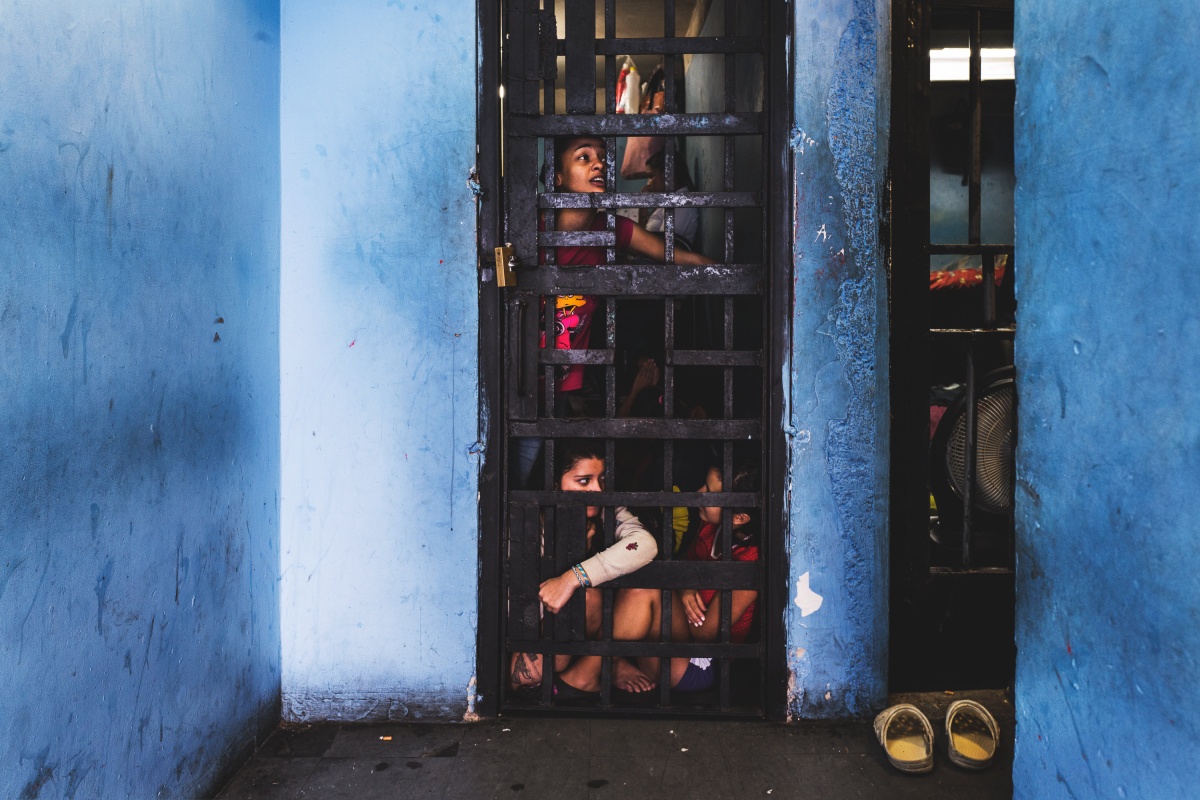 09
Two female prisoners communicate with male prisoners who are locked up just a few metres away from them. La Yaguara, Caracas, Venezuela. March 2018 10
A woman plucks her eyebrows with thread, in the sector for gang-related issues. There, they have not received visitors for three years, and they can only leave their cells for one hour a day. Ilopango, San Salvador, El Salvador. March 2021 11
Freshly washed cribs, outside the prison maternity ward. Once the children turn six, they must be separated from their mothers, who are then transferred to Ilopango prison. Izalco, San Salvador, El Salvador. March 2021 12
Three transgender women bathe in the makeshift bathroom in the courtyard of the Poli-Valencia Detention Centre. Trans women are at great risk, because they are put in cells with men. Venezuela. January 2017 13
Female and male prisoners shared this cell, before the police department closed their investigation office and transformed it into a women-only cell. Poli-Valencia, Carabobo, Venezuela. January 2017 14
Members of Gang 18. The prison decided to separate the women by gang membership, to avoid conflicts and fights: they are enemies to the death. Ilopango, San Salvador, El Salvador. March 2021 15
The female cell of the Poli Zamora Detention Centre in Guatire. Venezuela. December 2018 16
The women in the dormitory of the maternity sector go out every morning to be counted. In the afternoon, the guards also check that no one has escaped and that all the prisoners are in their cells. Izalco, El Salvador. March 2021 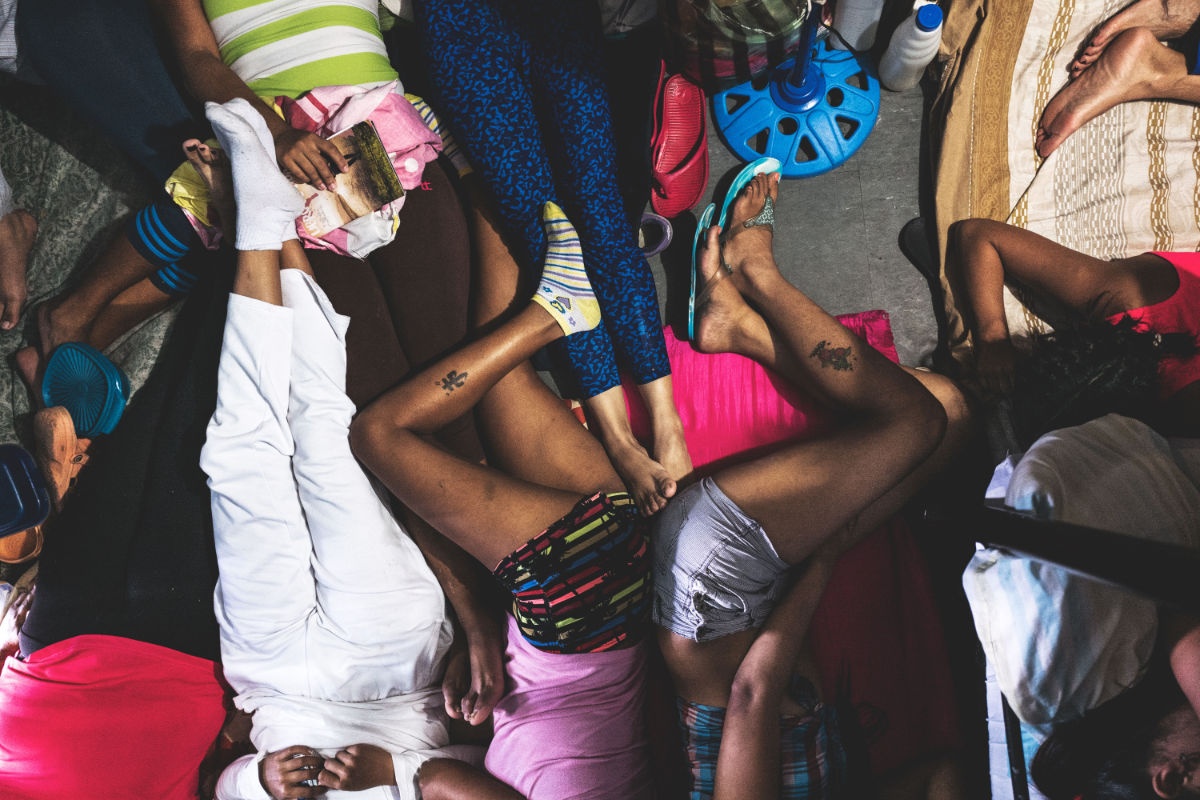 17
Twenty two female detainees, including two minors, share a narrow cell for months. Most of them sleep on mattresses on the floor. La Yaguara Detention Centre, Caracas, March 2018 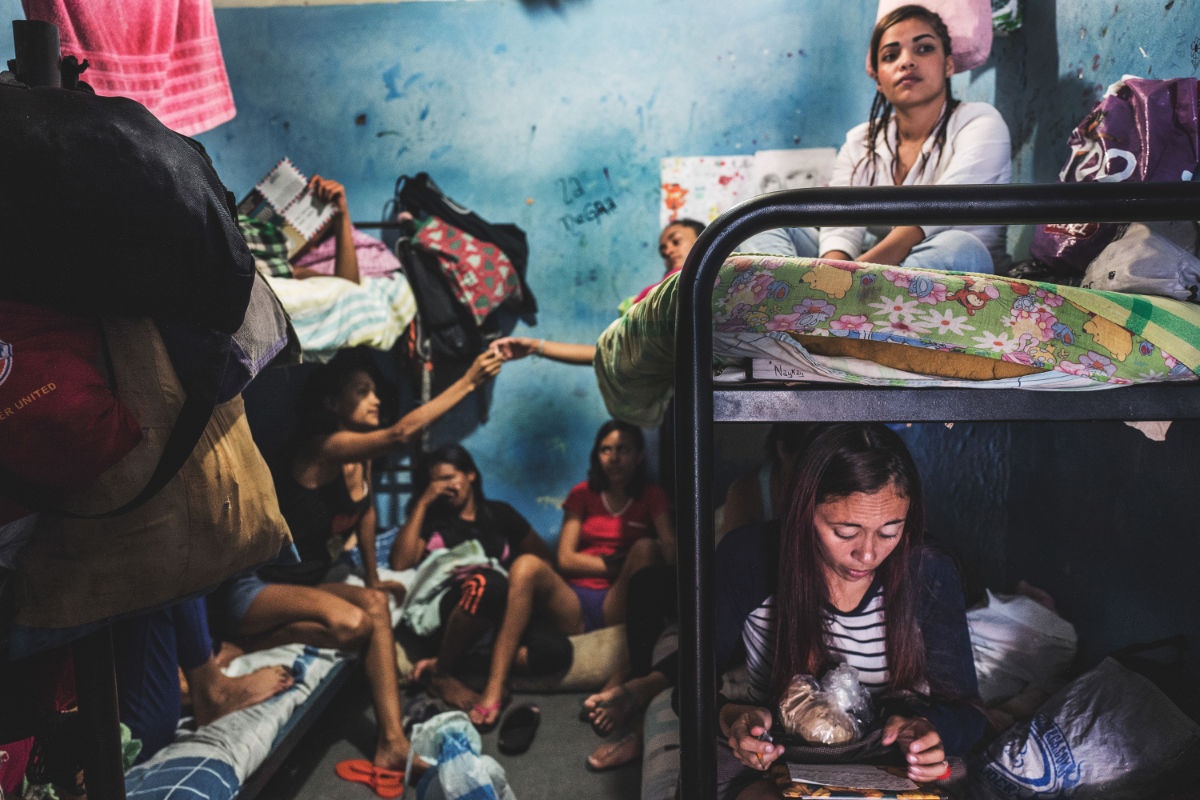 18
The women spend their days in deranged inactivity. They have adapted their “dungeon” to make it look more like a home. La Yaguara Detention Centre, Venezuela, March 2018 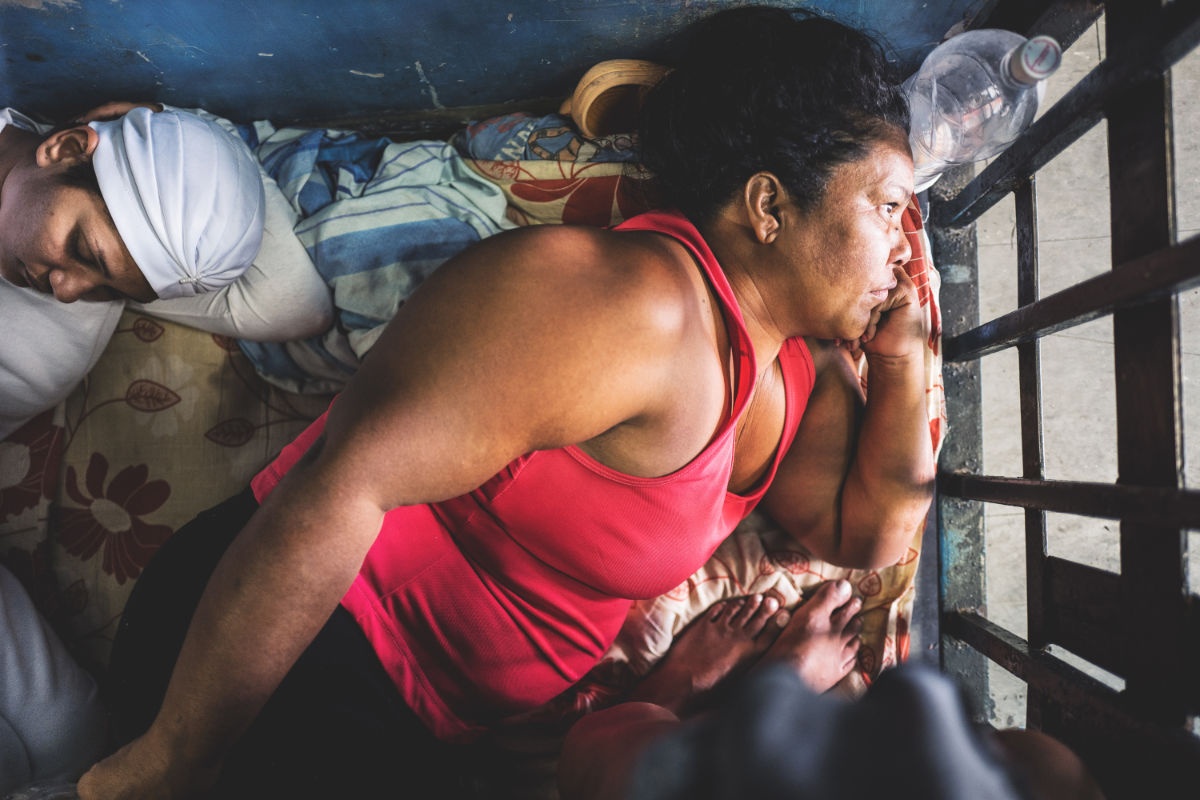 19
Daisy looks out through the barred door, the only source of light for this group of 22 detainees. She is 47 years old and is accused of drug distribution and possession of crack. La Yaguara Detention Centre, Venezuela, March 2018