The Arctic is changing radically. In his impressive series, the American photographer (born 1979) offers insight into the fascinating imagery of the North. Both the icebergs and the local population are disappearing; within a couple of decades a future Arctic awaits – not cold and unchanging, but living, dying and being reborn. 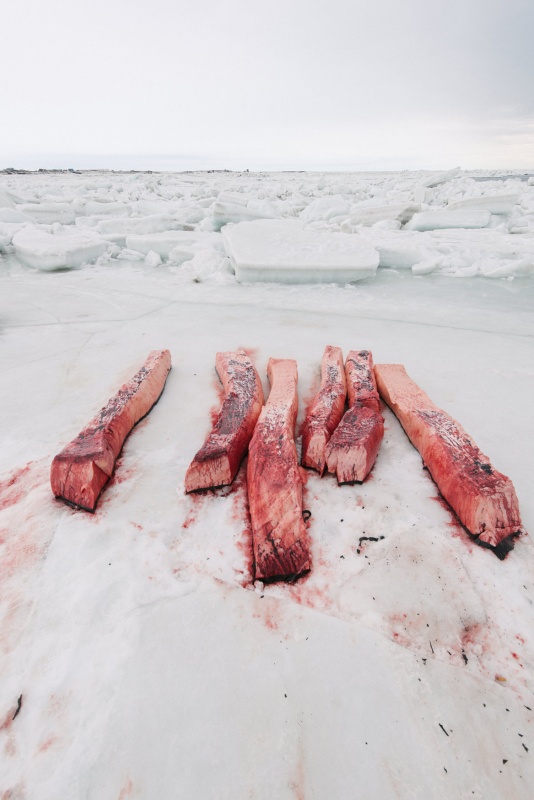 01
Large slabs of agviq, or bowhead whale, are apportioned on the ice for different Iñupiaq hunting crews. The tradition of apportionment is ancient and respected, ensuring that the gift of the whale is distributed to the entire village. 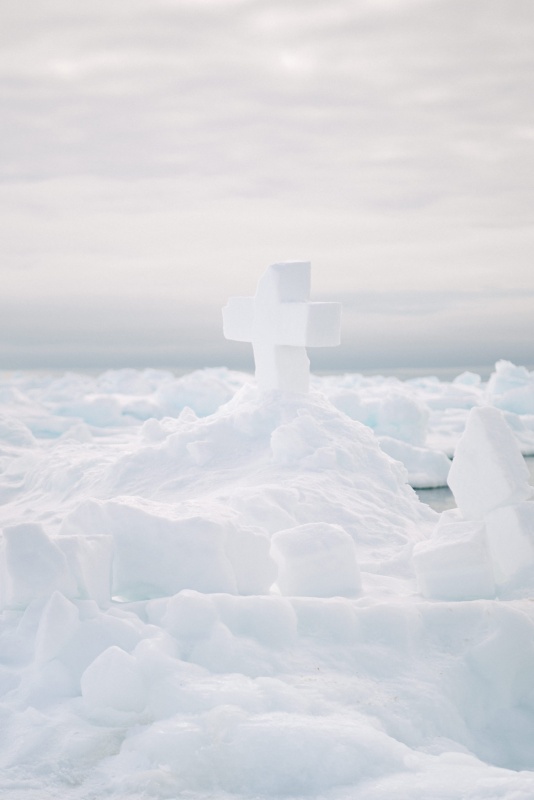 02
A cross, carved from an ice block, rests near the ice floe edge; a reminder of the importance of Christianity among contemporary Iñuit. 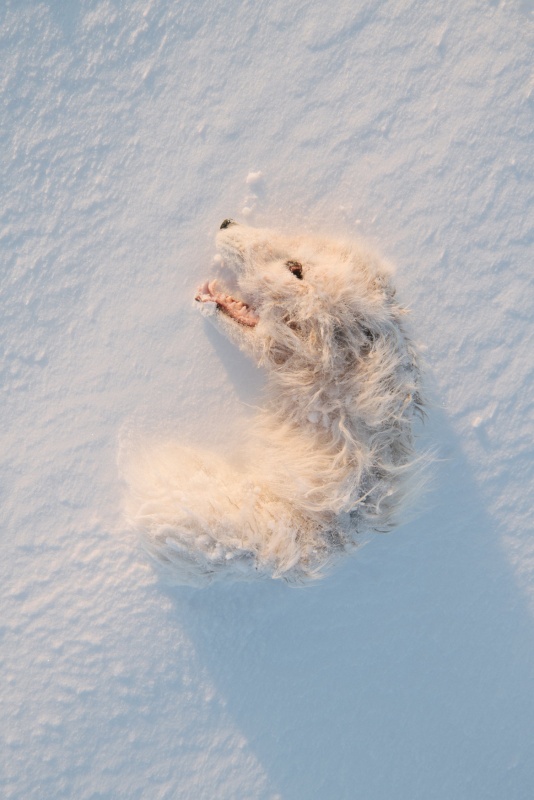 03
The frozen body of an Arctic fox found on the tundra, near the village of Gambell. Although the source of its demise is unknown, it is common for villagers to shoot Arctic foxes found near settlements, as the animals routinely carry the rabies virus. 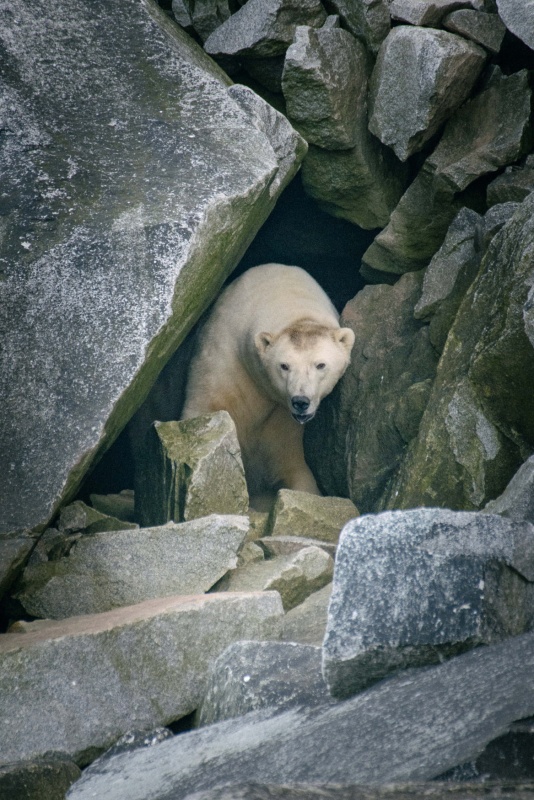 04
A thin polar bear rests in the shelter of a basalt cave on the shoreline of Herald Island in the Russian Arctic. In the summer season of hunger, the bears try their best to conserve energy. 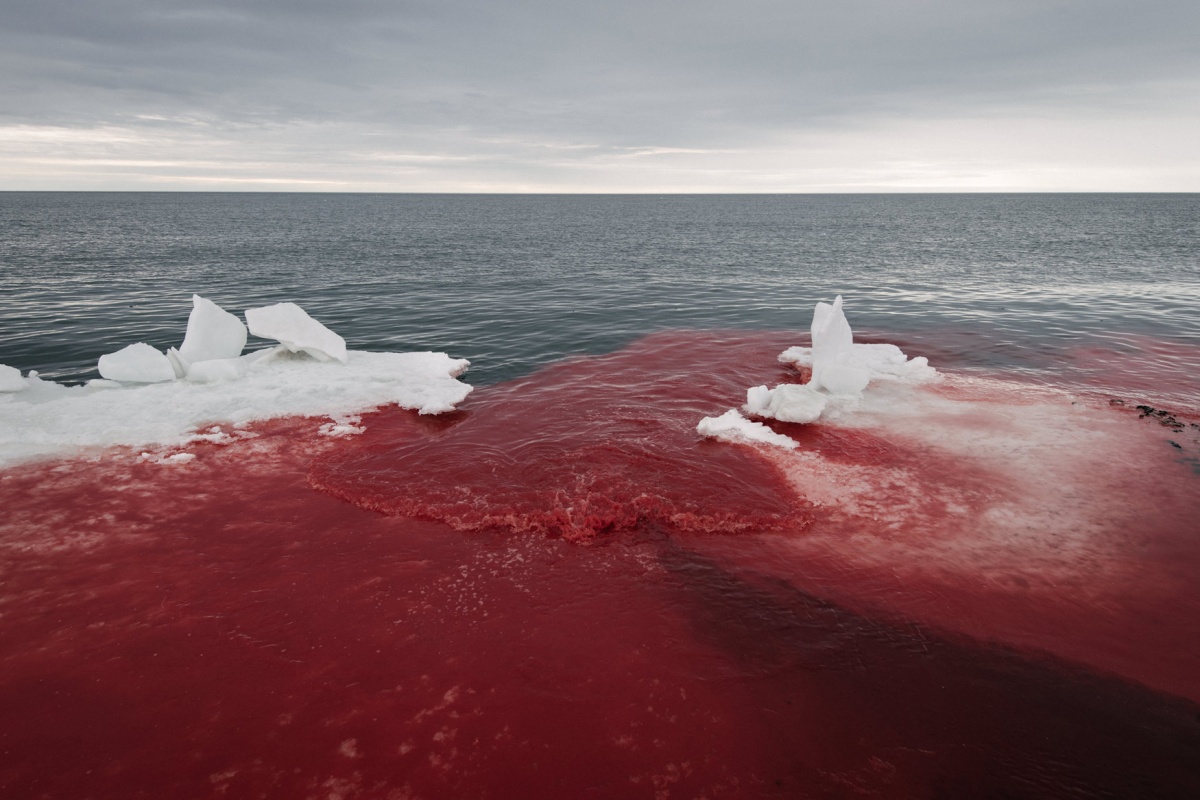 05
A wave of blood from a harvested bowhead whale washes onto the sea ice in late spring. For Westerners, the perception of whaling is often negative; for hunters such as the Alaskan Iñupiat, it is seen as a joyful, indelible part of their culture. 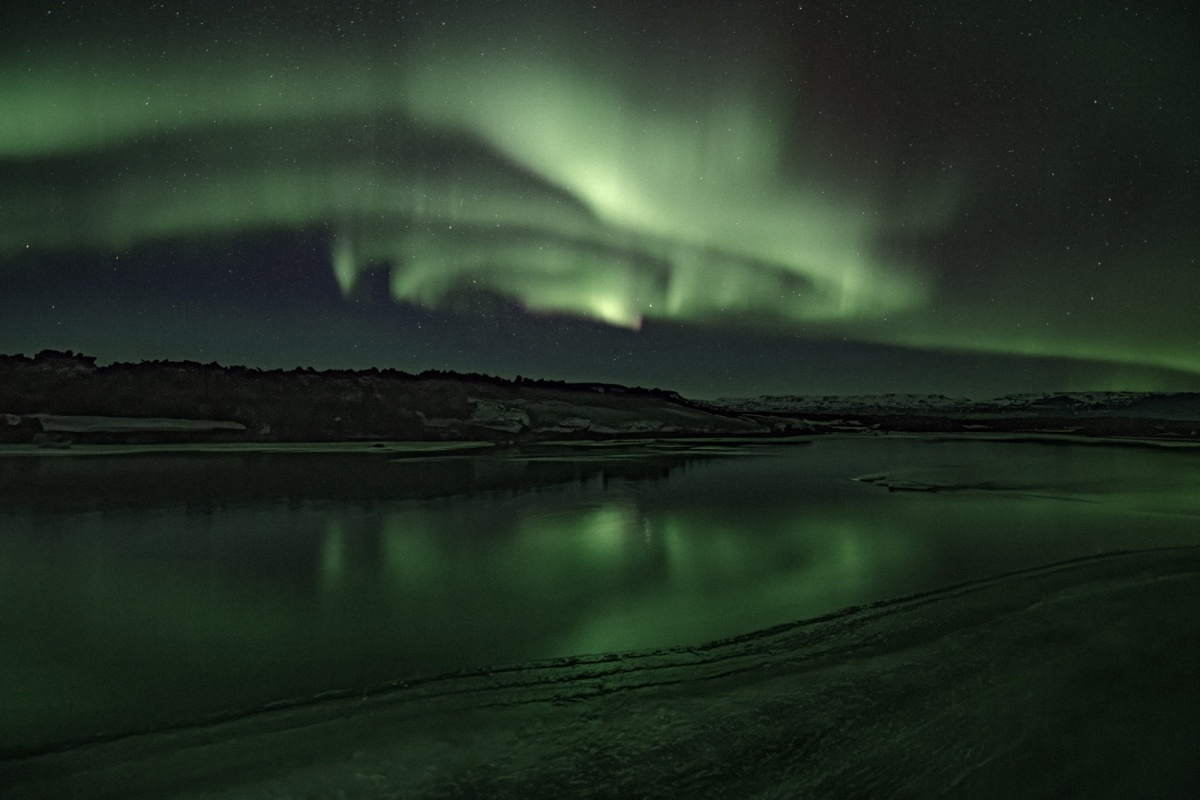 06
A vibrant aurora swirls overhead in the polar night of northern Iceland. In Iceland, as with many northern cultures, the aurora represents the visitation of ancestors; and illuminates the way, during the time of year when there is no other light. 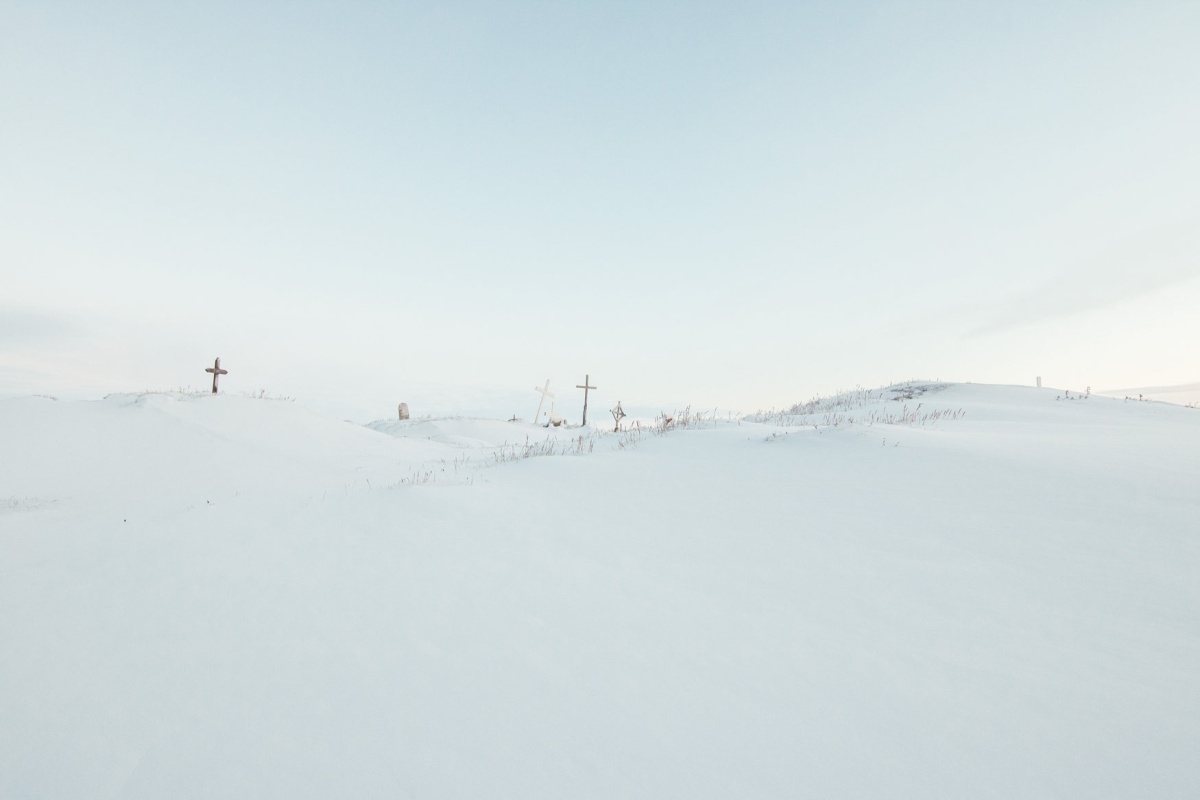 07
Generations of Iñupiaq ancestors lie in this snowy cemetery in Utqiagvik. 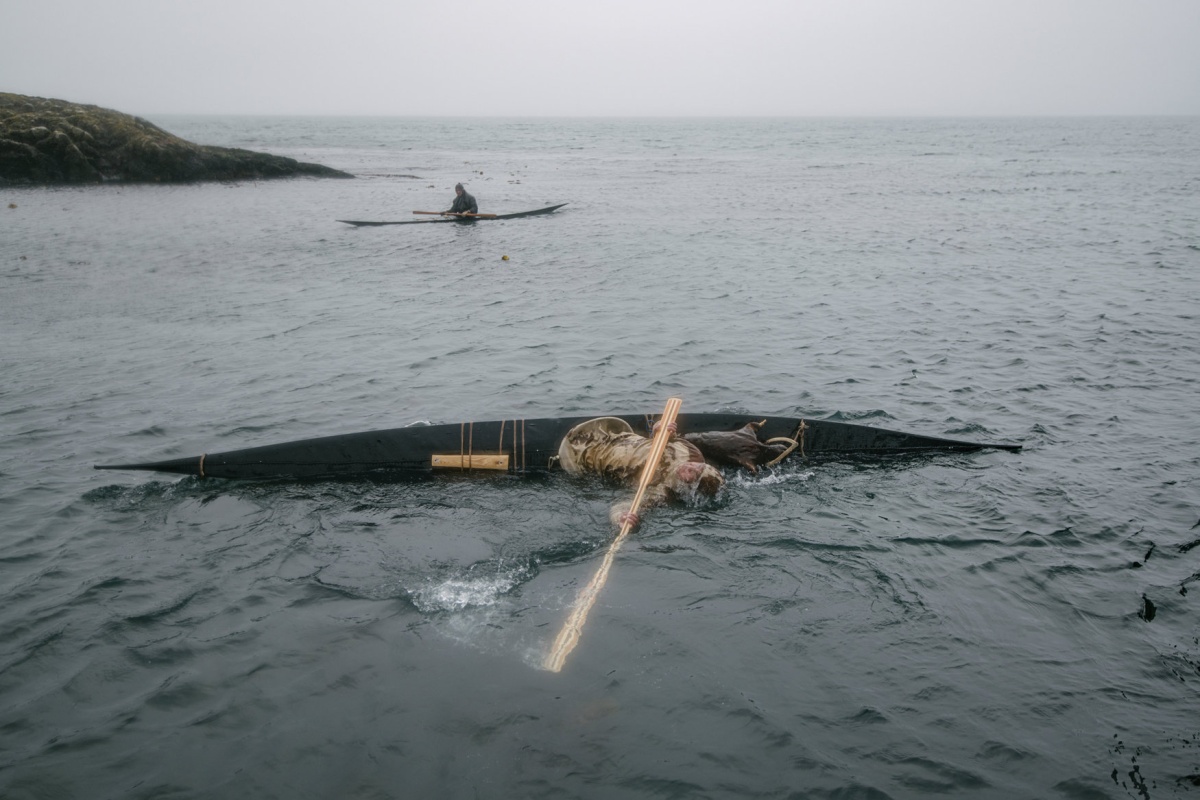 08
Kunuunnguaq Davidsen performs a kayak roll in the Greenlandic National Championships. Traditional kayak rolling was done to recover from capsizing, during kayak hunting. It has since evolved into a national sport, with 37 increasingly difficult rolls. 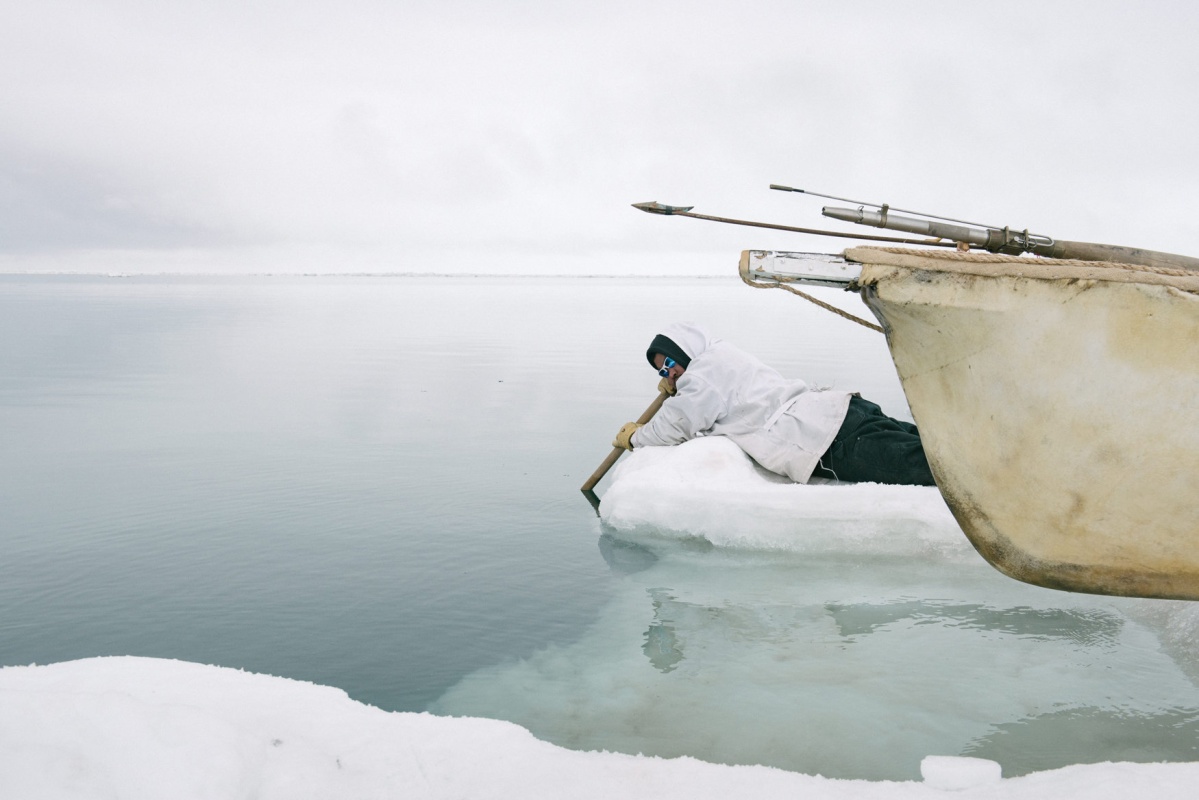 09
Larry Lucas Kaleak listens to the sounds of passing whales and bearded seals through a paddle in the water. These sounds are unique and distinctive, and can be easily heard in the vibrations of the wooden paddle. 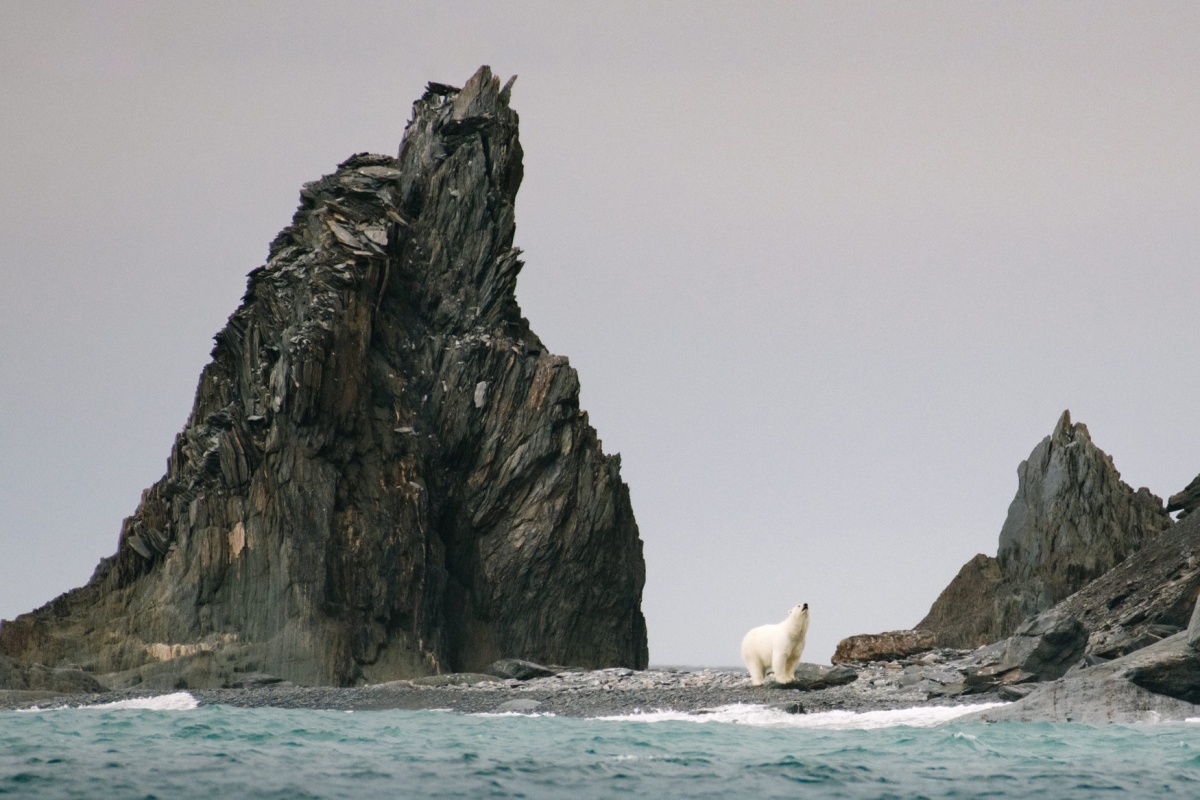 10
A polar bear waits for the return of the sea ice, by a beach on Russia’s Herald Island in August. The retreat of the summer ice in the western Chukchi Sea has resulted in a concentration of hundreds of polar bears, so that personal space is limited. 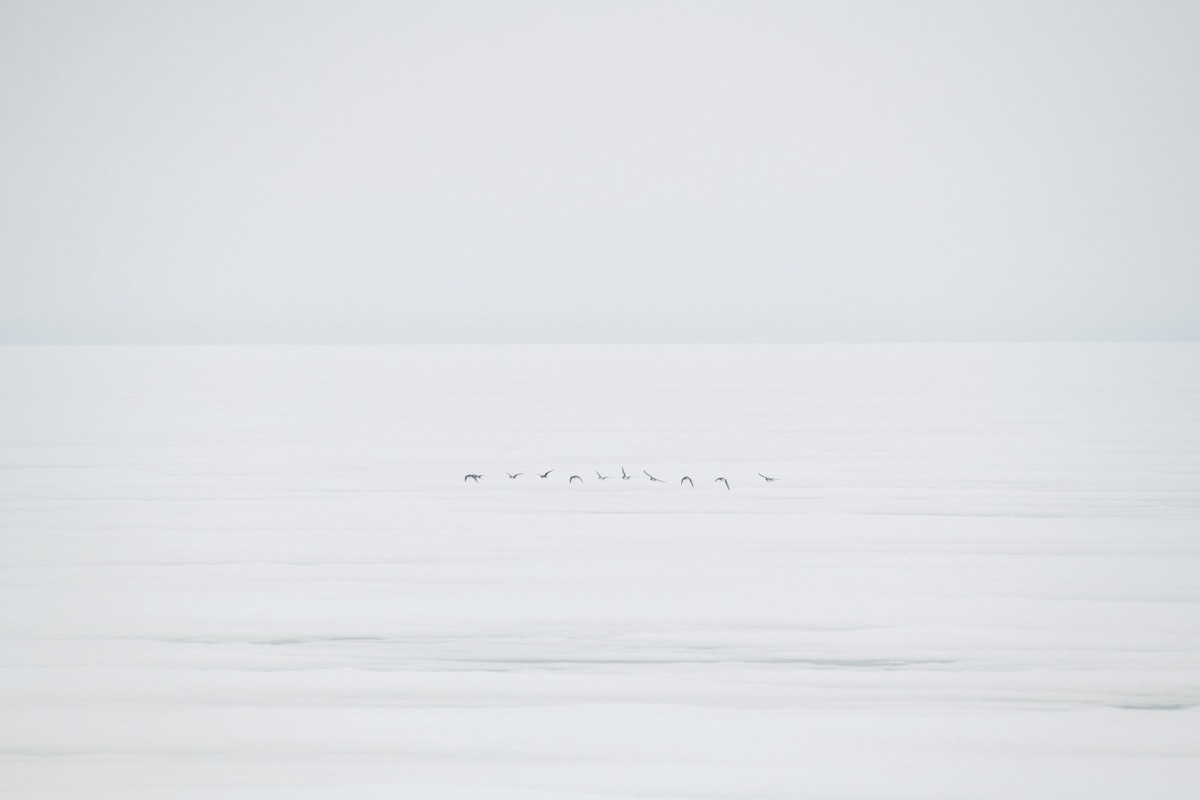 11
Migrating jaegers (Stercorarius) search for nesting sites across the frozen surface of a lake in Alaska’s National Petroleum Reserve. At the junction of several migratory flight paths, the reserve provides refuge for the densest concentration of birds in the Arctic. 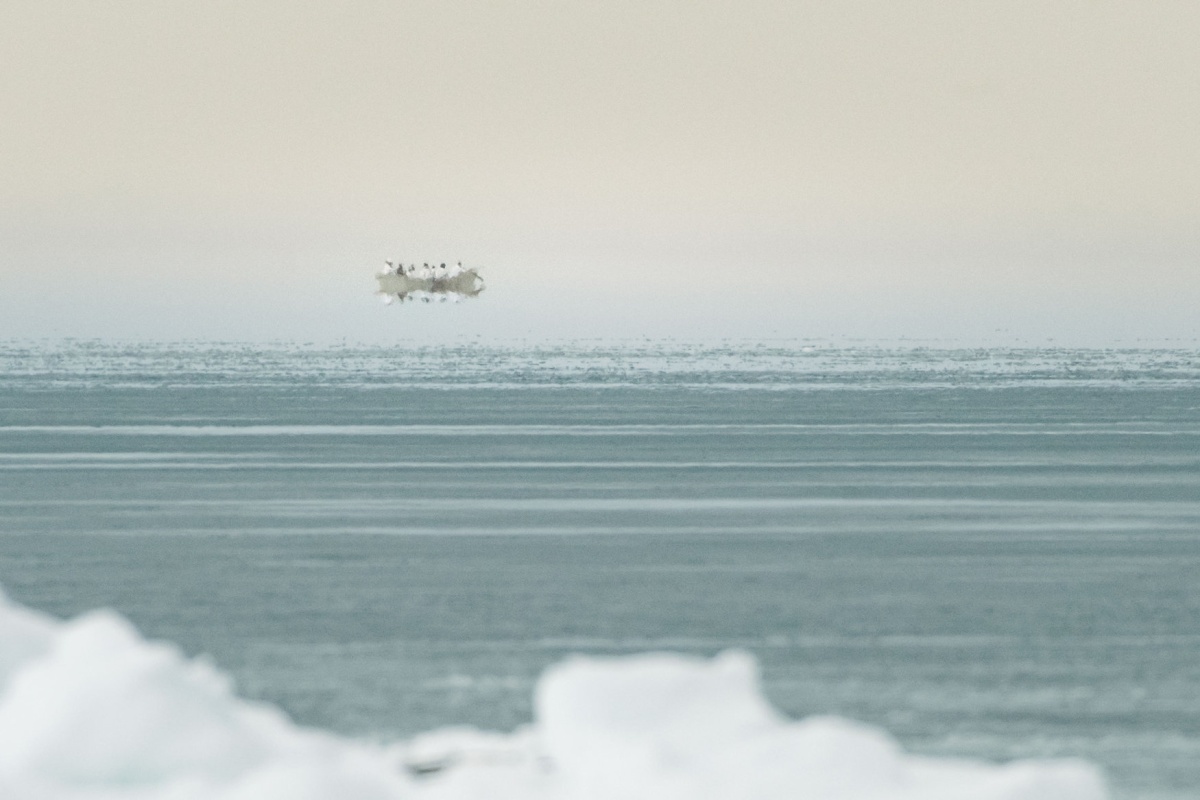 12
On the Arctic Ocean, Iñupiat paddle their umiaq hide boat. A Fata Morgana mirage makes the umiaq appear to float above the sea. Spring whaling by umiaq is made possible by the shore-fast sea ice. 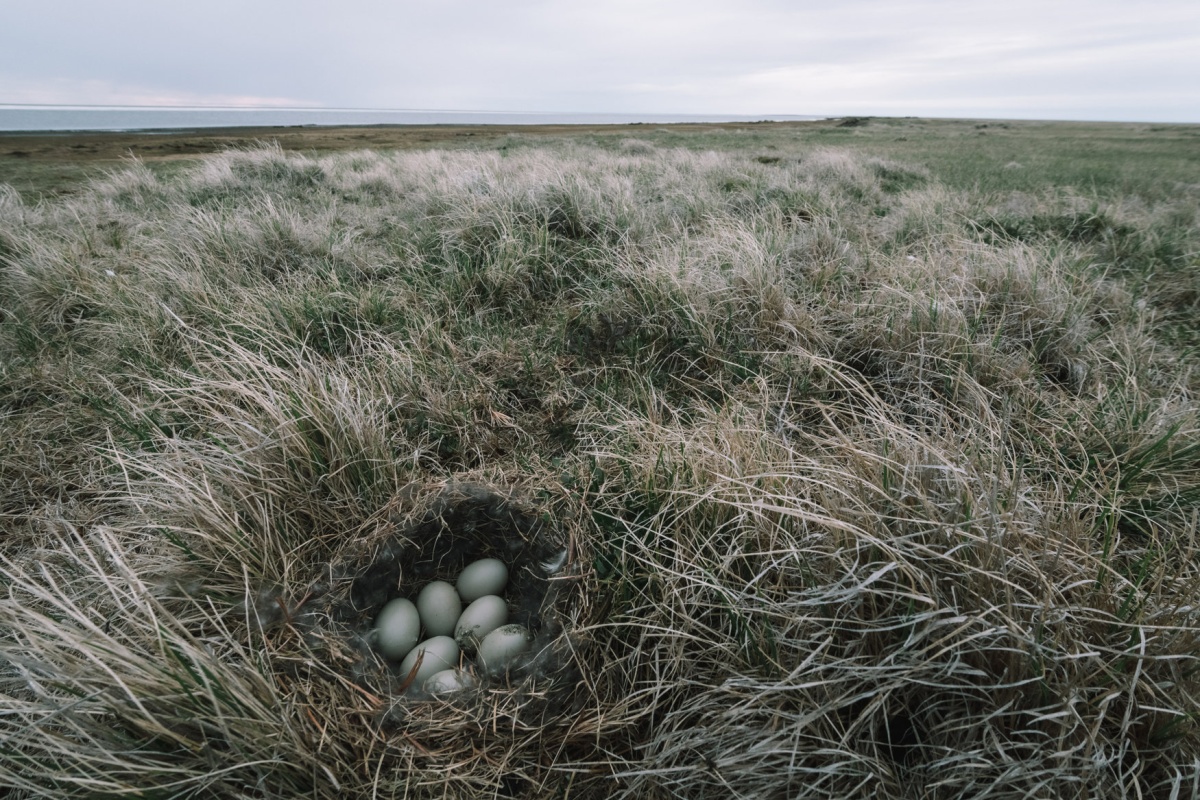 13
A snow goose nest disappears amid the grasses of the tundra. It is part of a colony of hundreds in the vicinity. The intersection of two intercontinental flight paths brings together the largest collection of migratory birds in the Arctic. 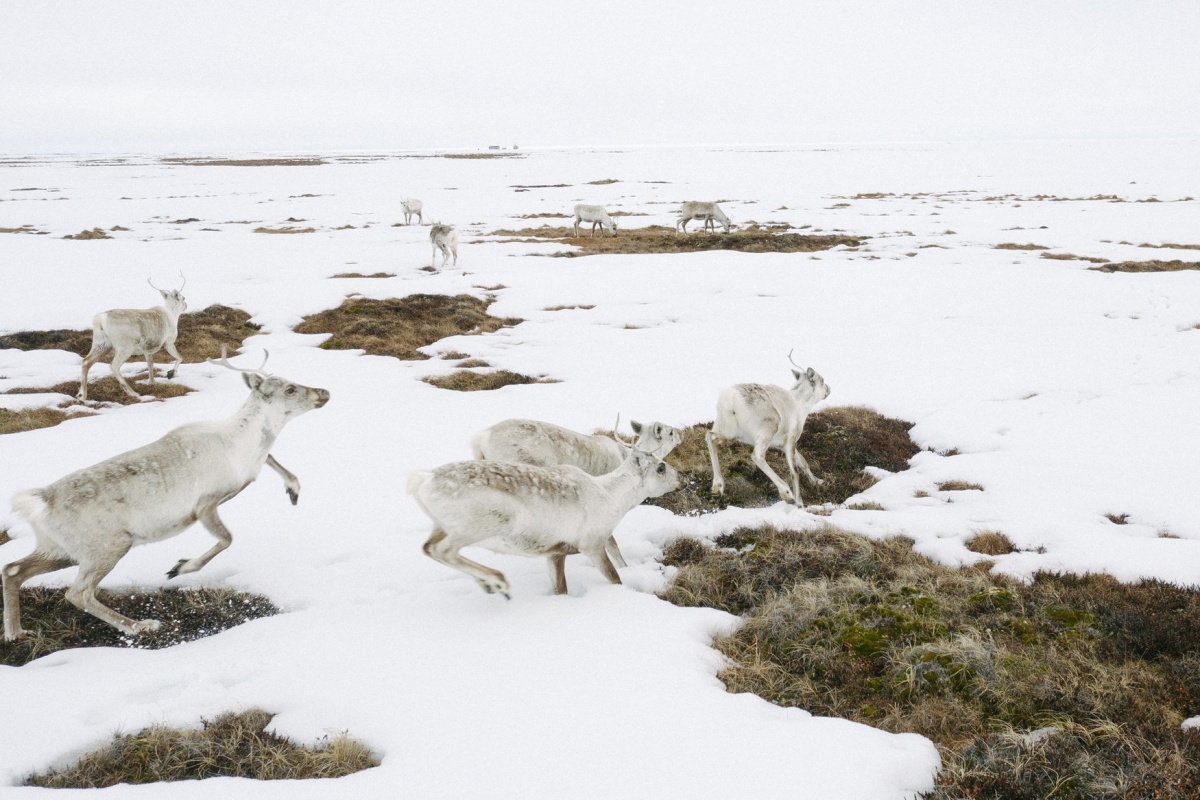 14
In May, caribou from the 50,000-strong Teshekpuk herd jump through deep snow at the edges of Lake Teshekpuk. The herd is important to Alaskan Iñupiaq subsistence hunters from the nearby villages of Utqiagvik and Nuiqsut. 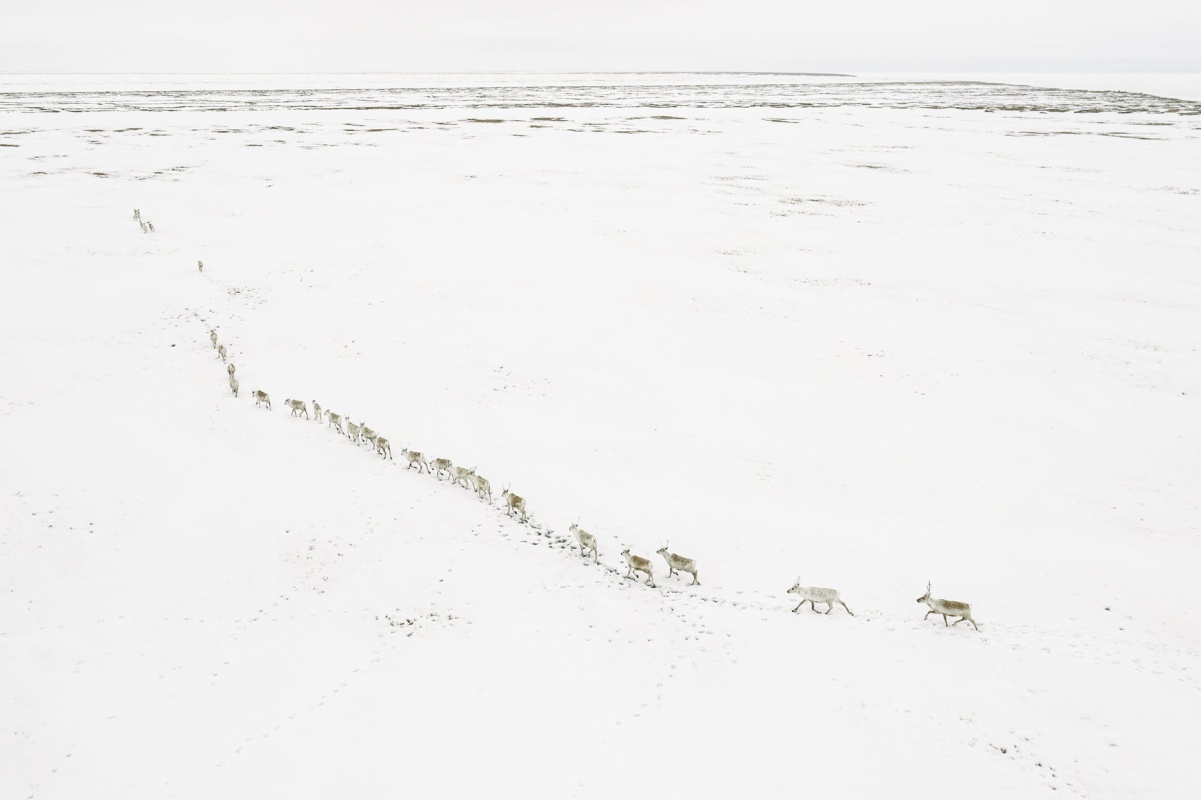 15
A herd of caribou cross the vast plain of Alaska’s Lake Teshekpuk, the largest lake in the Arctic. Teshekpuk is home to one of the great caribou herds, as well as the destination for some of the largest flocks of migratory birds on earth. 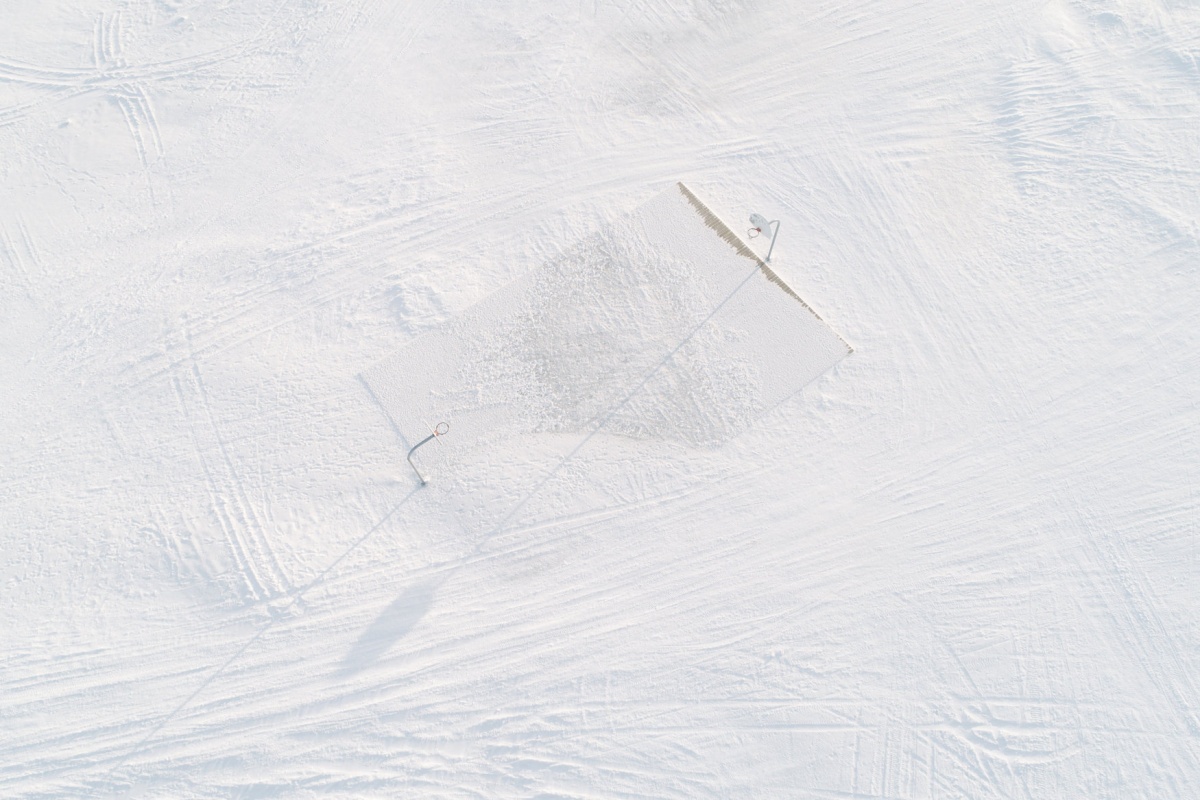 16
A basketball court sits empty in the village of Gambell, Alaska. For the Yup’ik youth of the village, the recent suicide of a friend who loved the game has kept them away from the court. 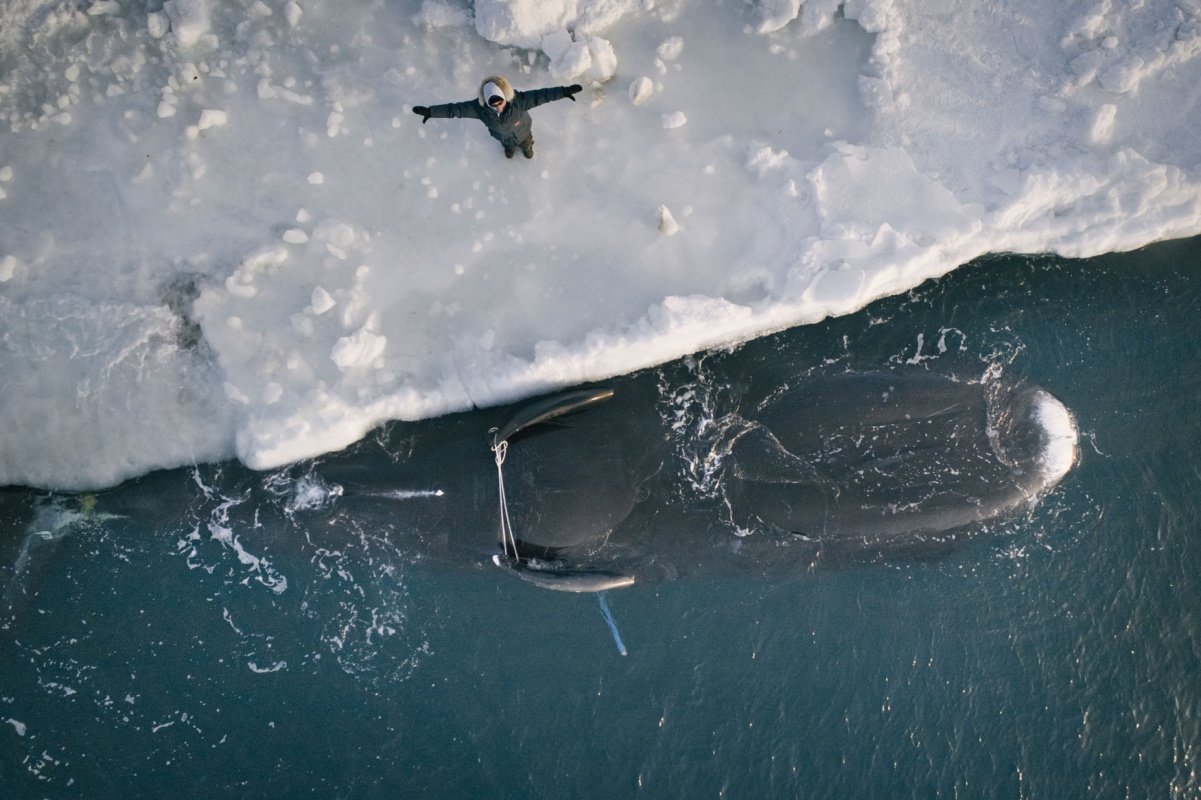 17
Flora Aiken gives a silent blessing to the first bowhead whale of the spring season. The Iñupiaq have a rich spiritual life, which centres around the gift of the whale to the community. 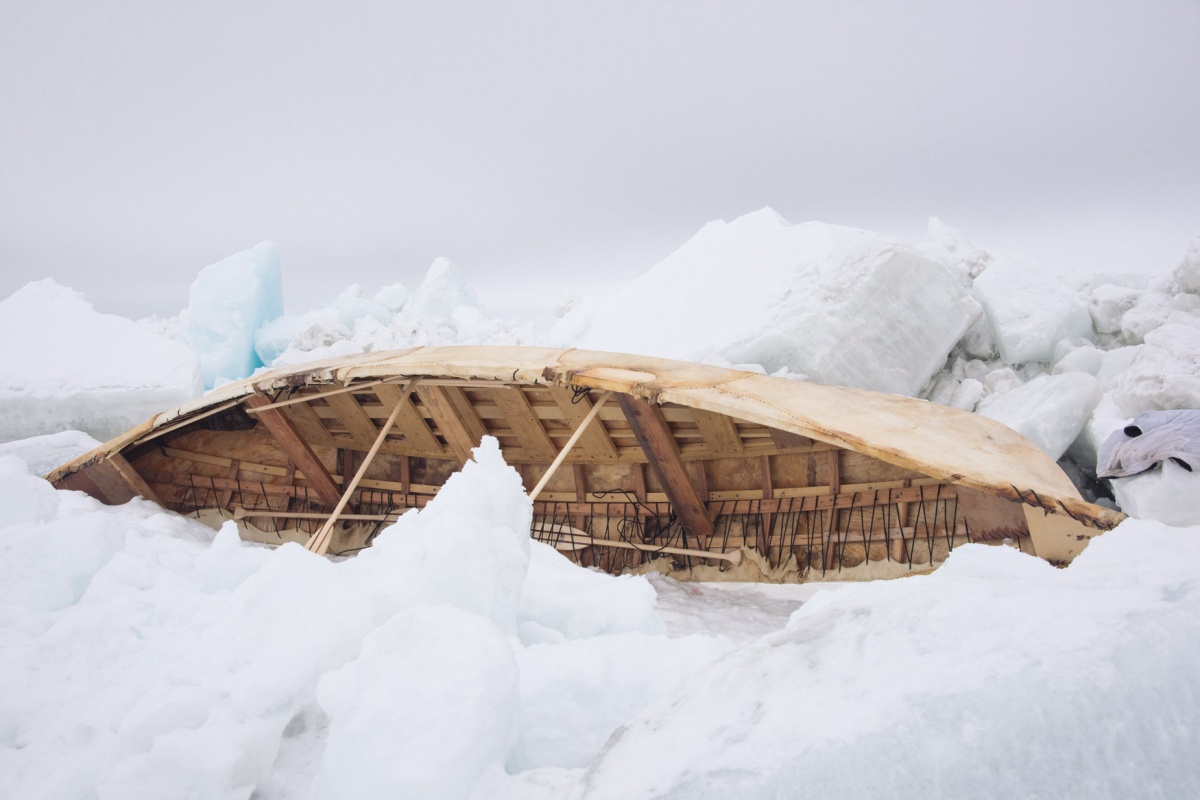 18
This newly-built umiaq belongs to a Quuntiq crew, the youngest in Utqiagvik. Whaling tradition is passed on to younger generations, as Iñupiat increasingly understand the importance of a cultural identity through traditional practices.
010203040506070809101112131415161718