Irene Barlian, Land of the Sea

As the largest island nation on the planet, Indonesia is acutely affected by ongoing climate change. It threatens the livelihoods of millions of people; their displacement has long become a reality. The capital of Jakarta is already known as the fastest sinking metropolis in the world. This is a wake-up call in the form of photography: in this series, the Indonesian photographer (born in 1989) documents a humanitarian crisis and the effects of flooding along the coastal regions. 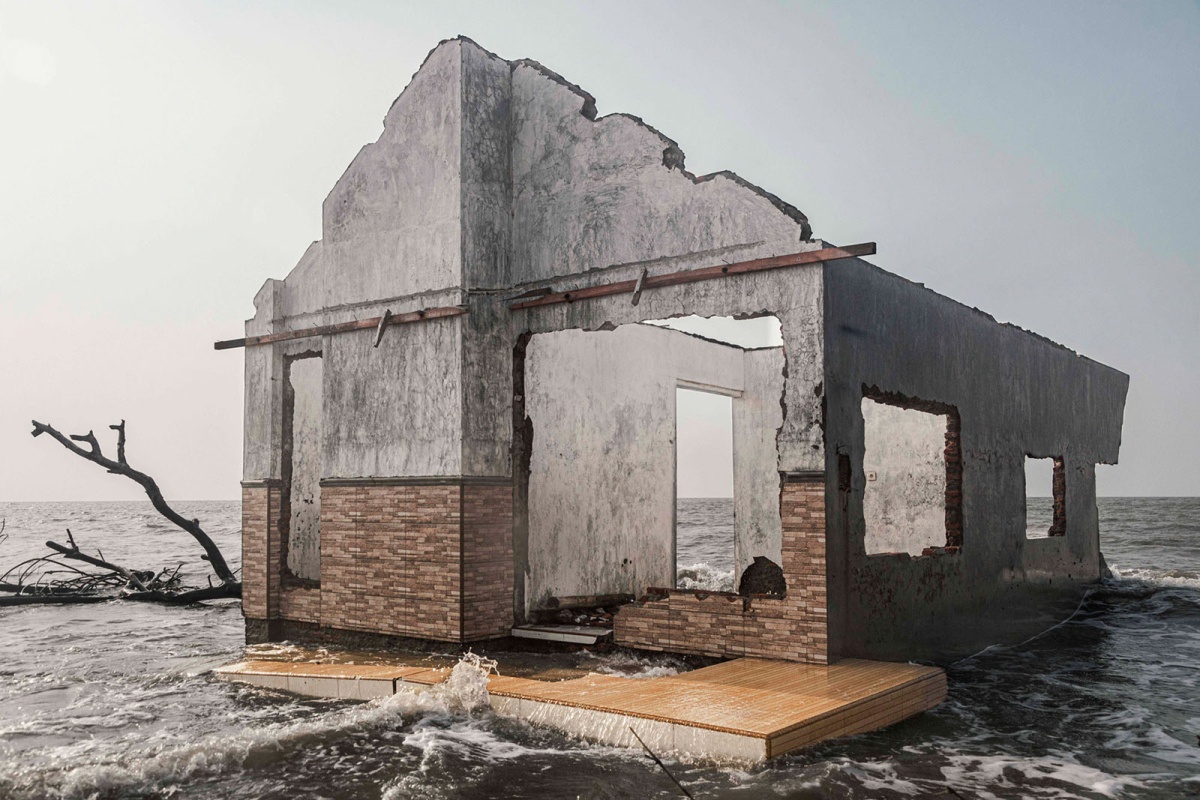 01
A deserted house stands out in the middle of the Java Sea in Pekalongan; coastal floods have submerged the settlement. Indonesia 2021 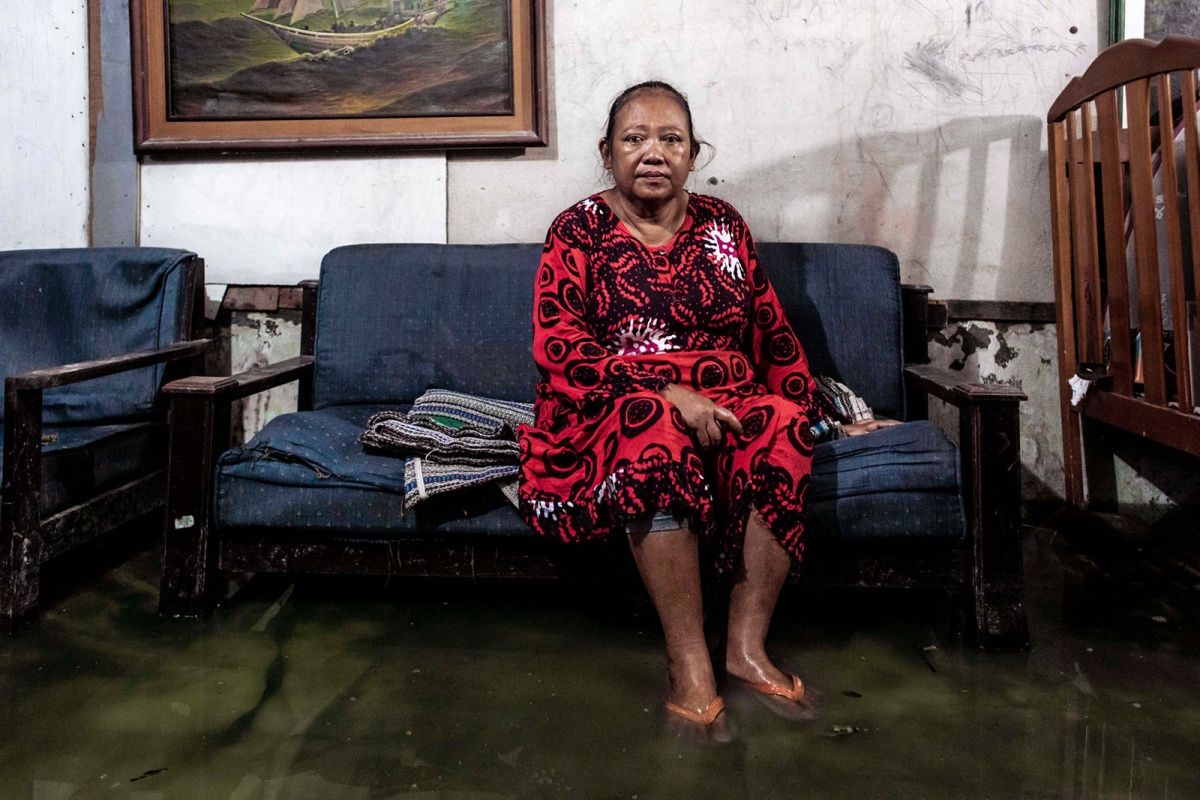 02
Siti Mardyan Budhiastuti, 54, wishes to sell her house and move out, but is having a hard time finding a buyer. Indonesia 2020 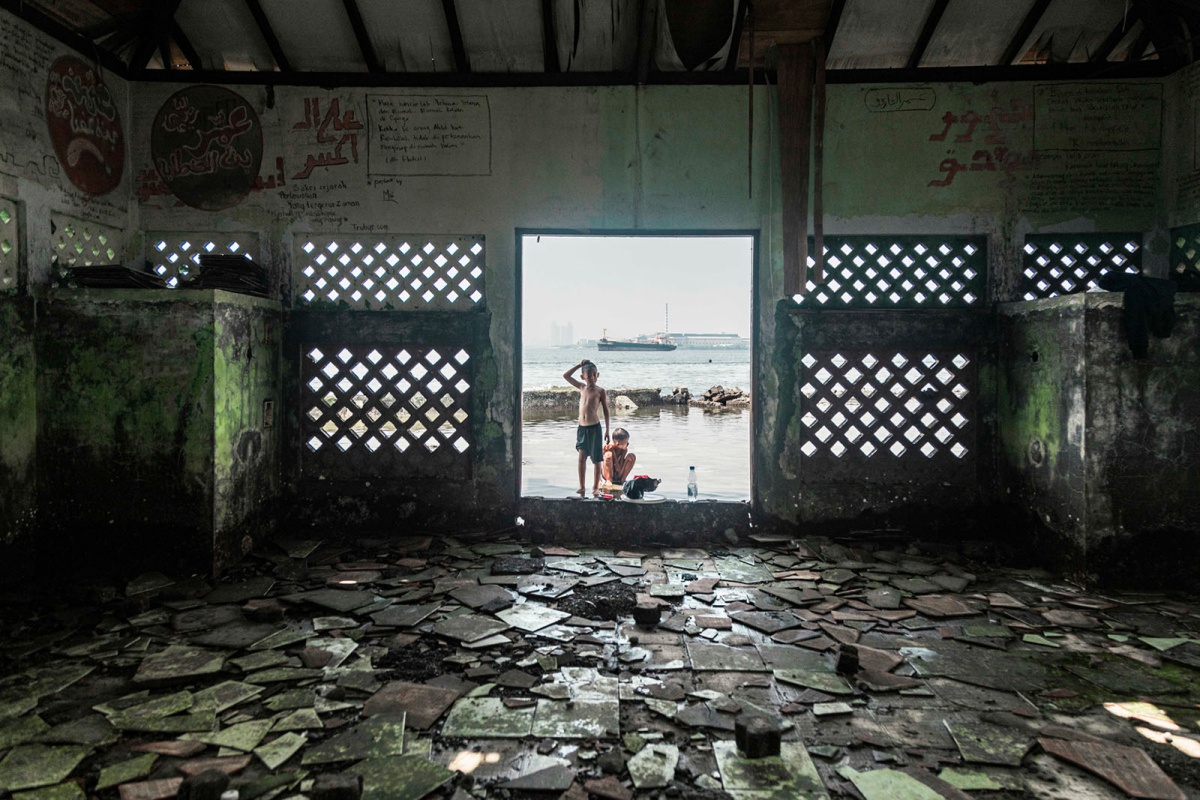 03
Children are swimming next to Wal Adhuna Mosque in North Jakarta. Indonesia 2021 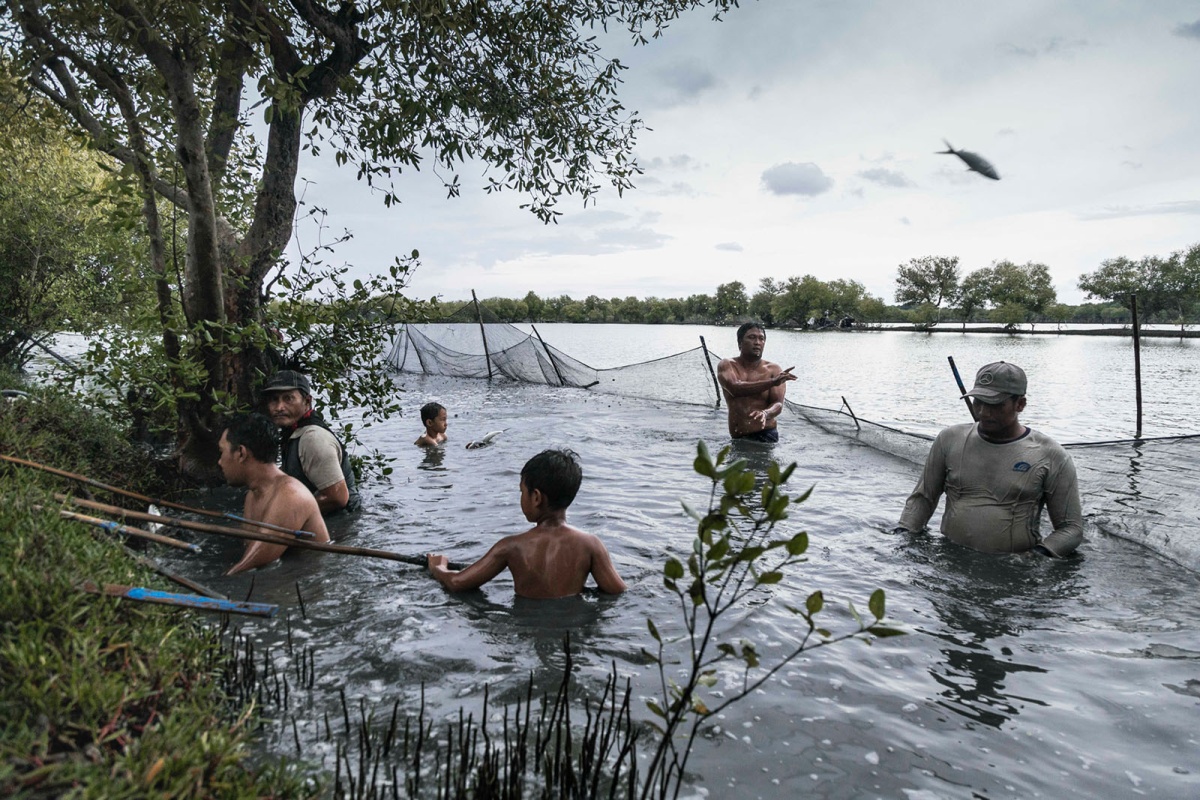 04
A group of farmers is harvesting milkfish in Gresik. The rising seawater affects the catch. Indonesia 2020 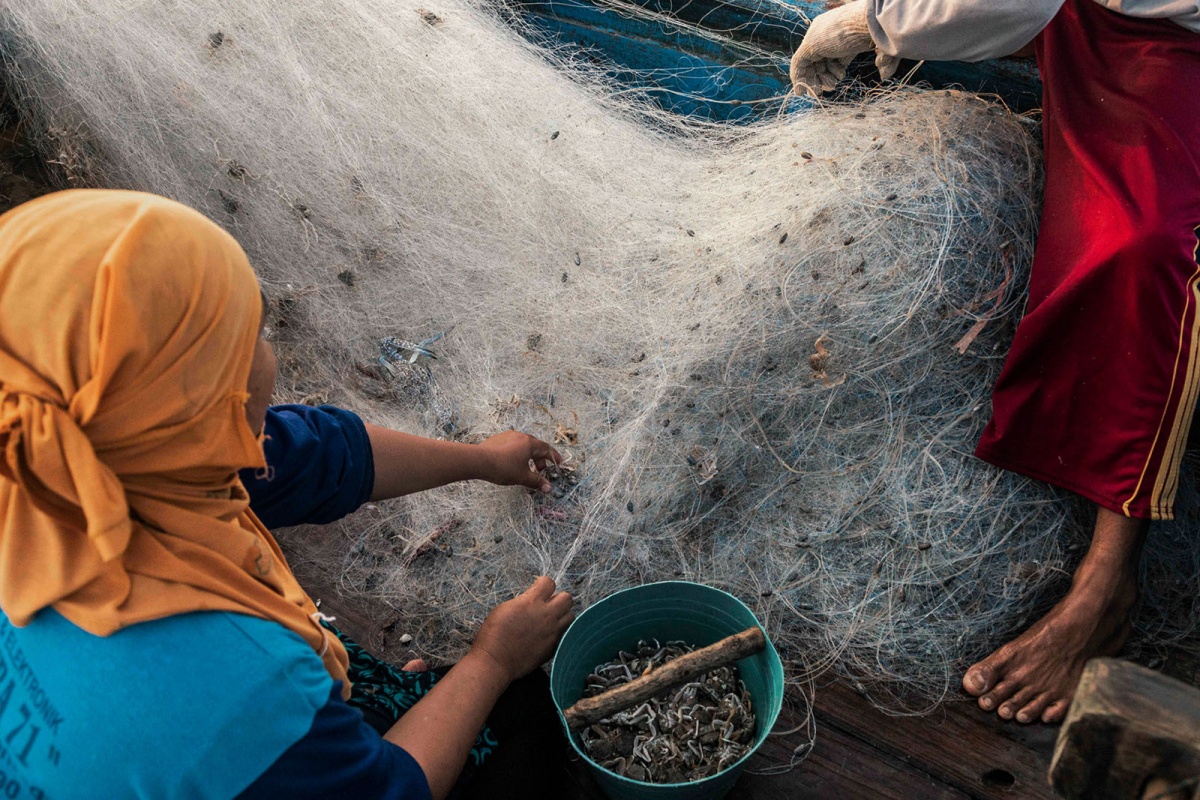 05
The fishermen Siti Darwati, 35, and Musaqori, 38, are thankful for just two kilos of blue crabs. Indonesia 2021 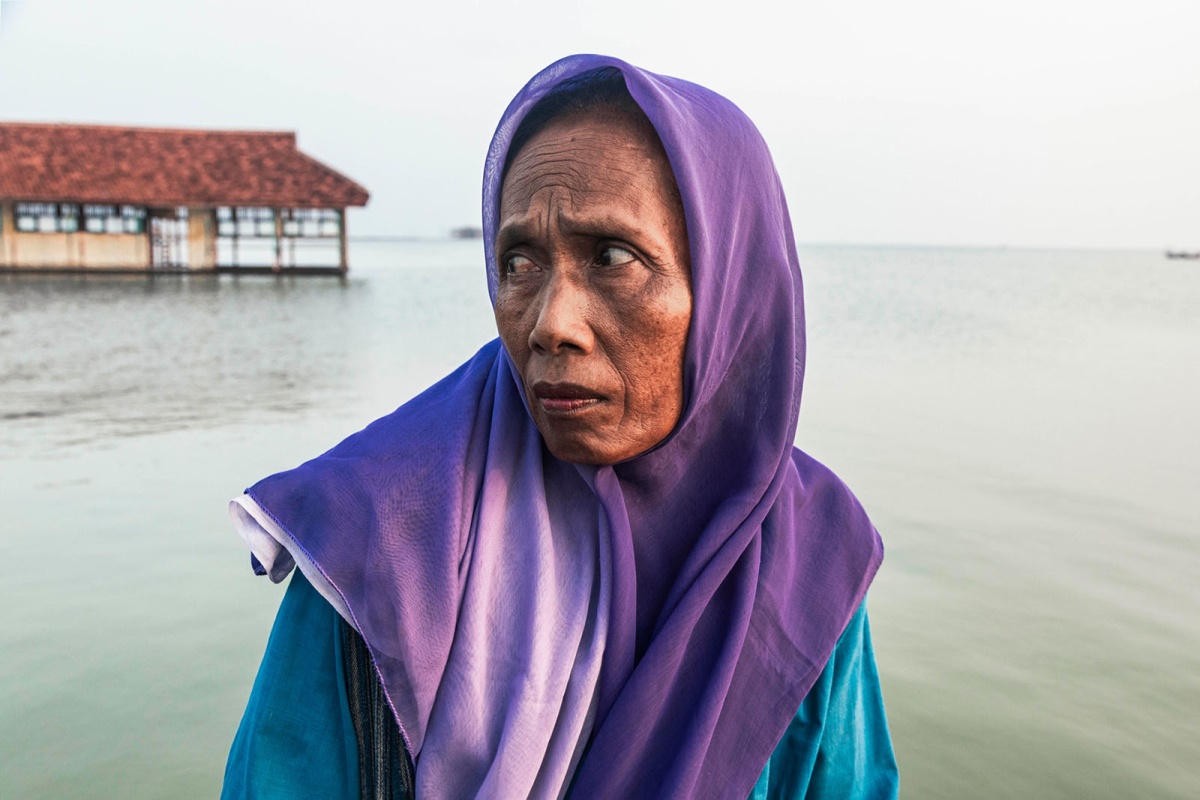 06
Pasijah, 52, and her family are the only residents who still live in Bedono. The village has already been engulfed by the sea. Indonesia 2021 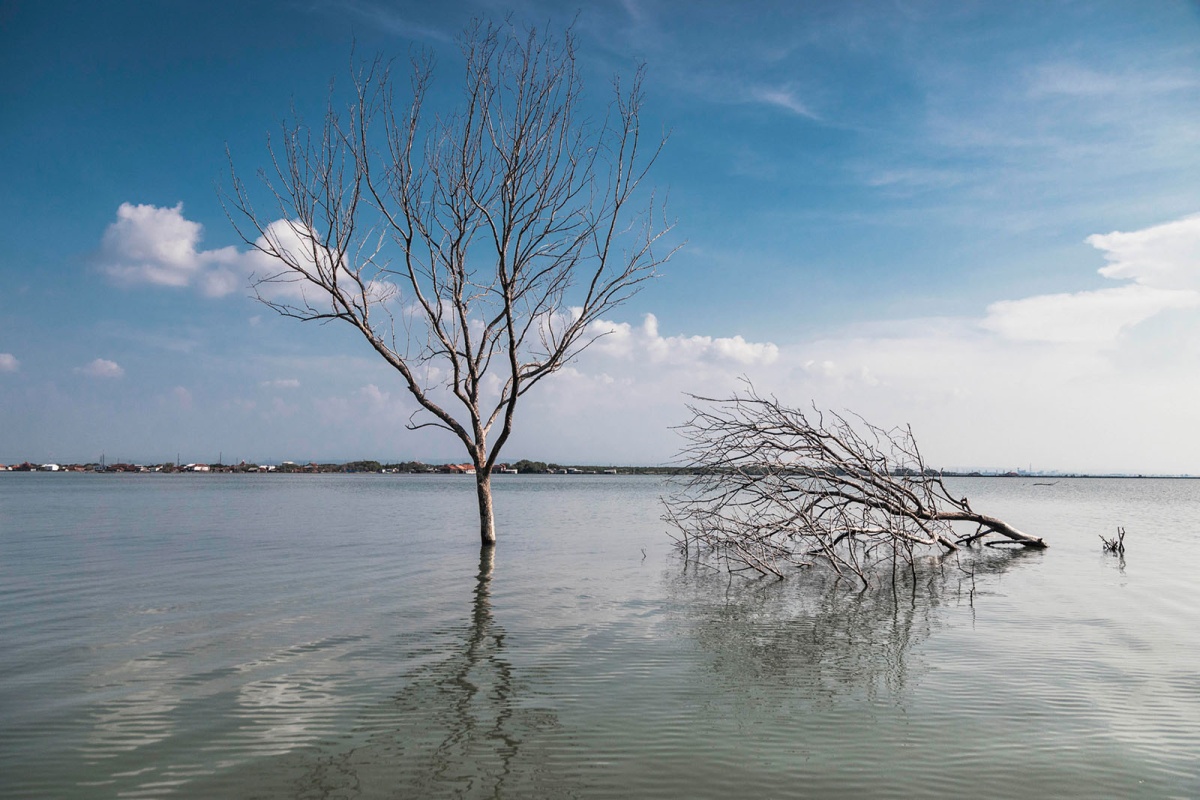 07
The skeletons of trees, standing in the middle of the ocean, in Demak. Indonesia 2021 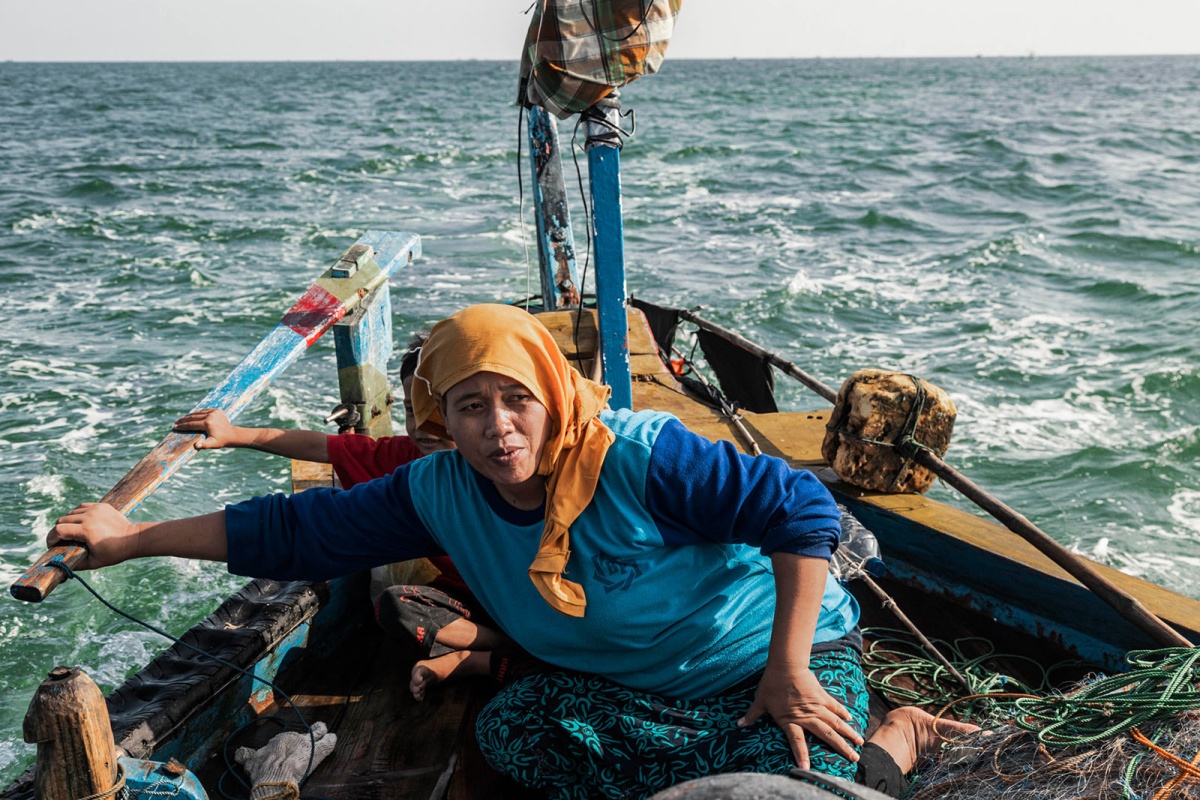 08
Siti Darwati, 35, helps her husband on a fishing trip in Demak, because they cannot afford a boat crew. Indonesia 2021 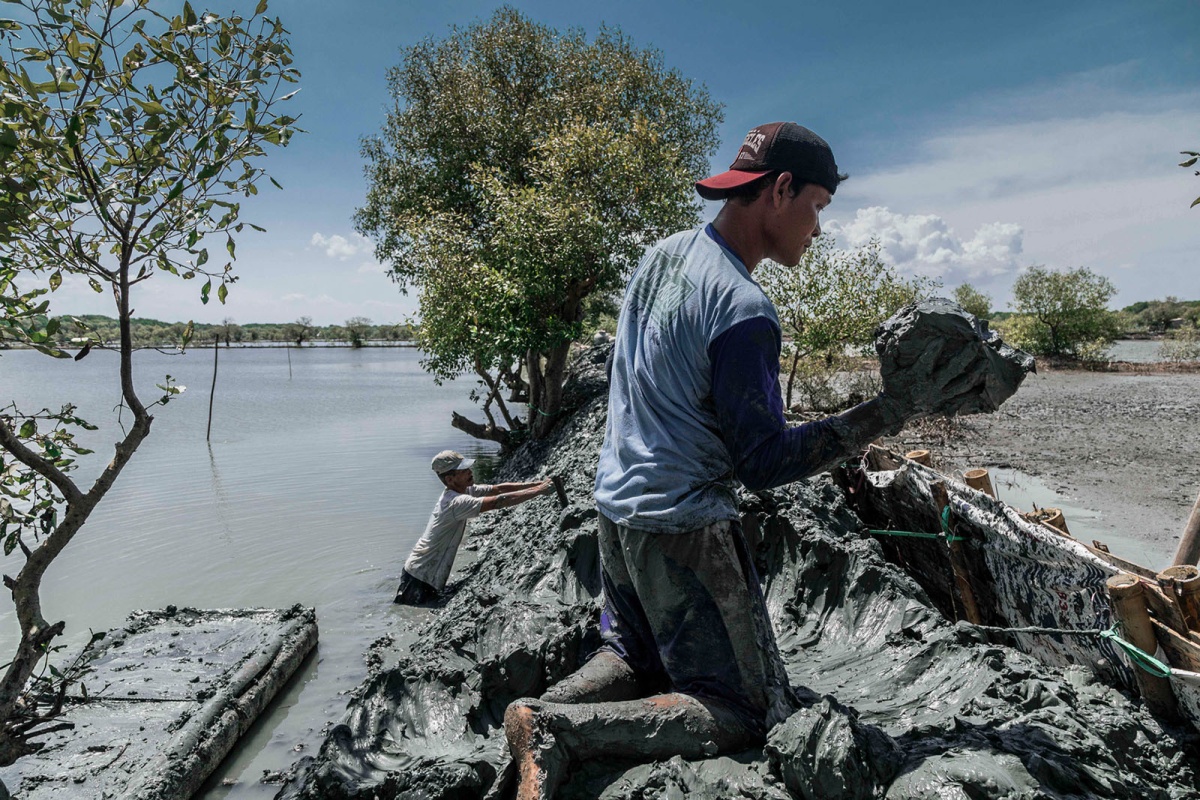 09
Muhammad Ali Zainudin, 35, and Nastain, 67, protect the milkfish embankment in Gresik, with mud and bamboo. Indonesia 2020 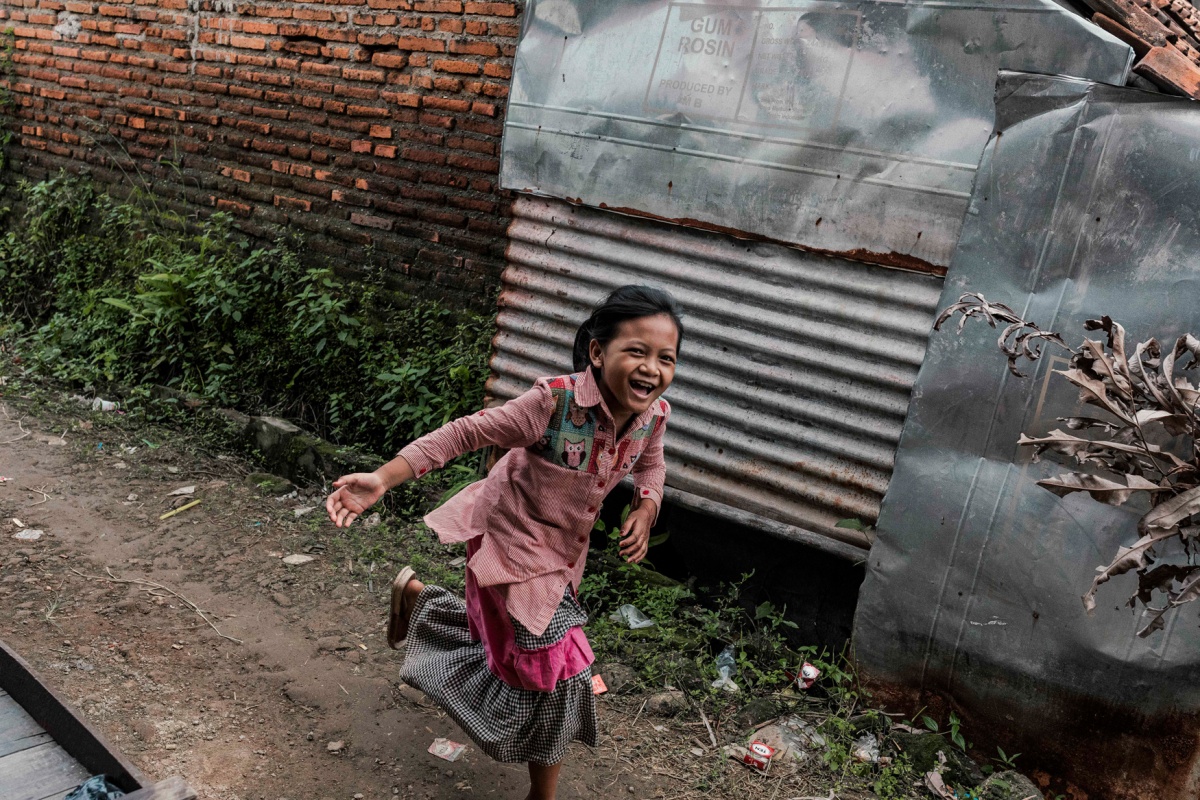 10
Jaiyyidah Azna, 9, plays in front of her home in Pekalongan. Before the inundation by sea water, the land was fertile. Indonesia 2021 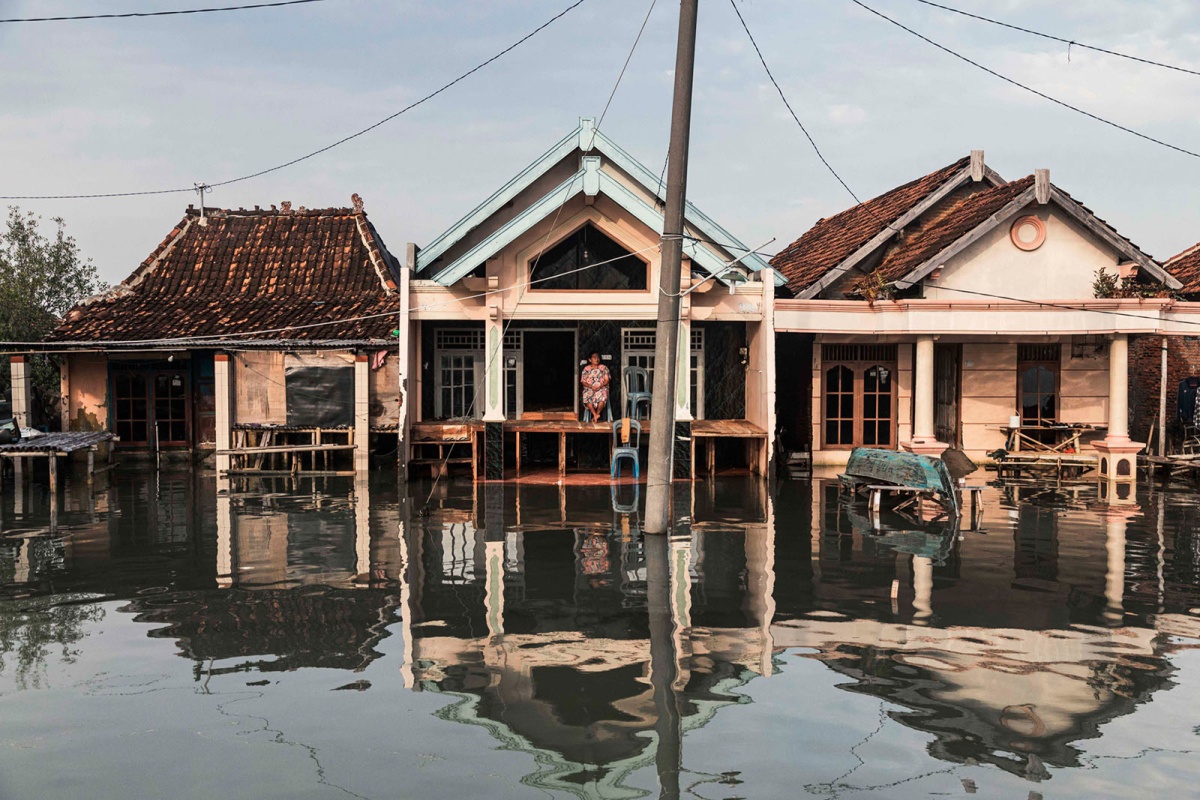 11
A woman on her elevated balcony in Demak. The sea reached Timbulsloko for the first time in 2010, later it flooded the whole village. Indonesia 2021 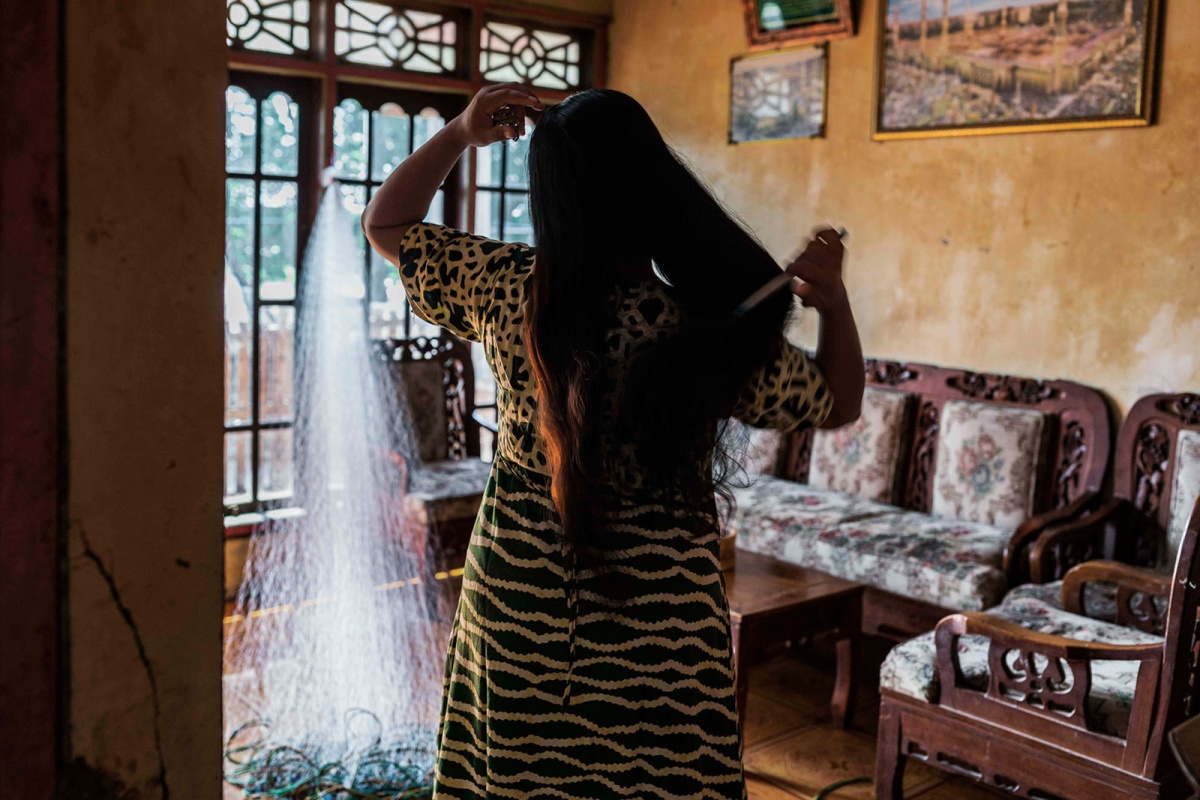 12
Siti Darwati, 35, combs her hair after a fishing trip in Demak. There are now 30 women acknowledged as fishermen in the area. Indonesia 2021 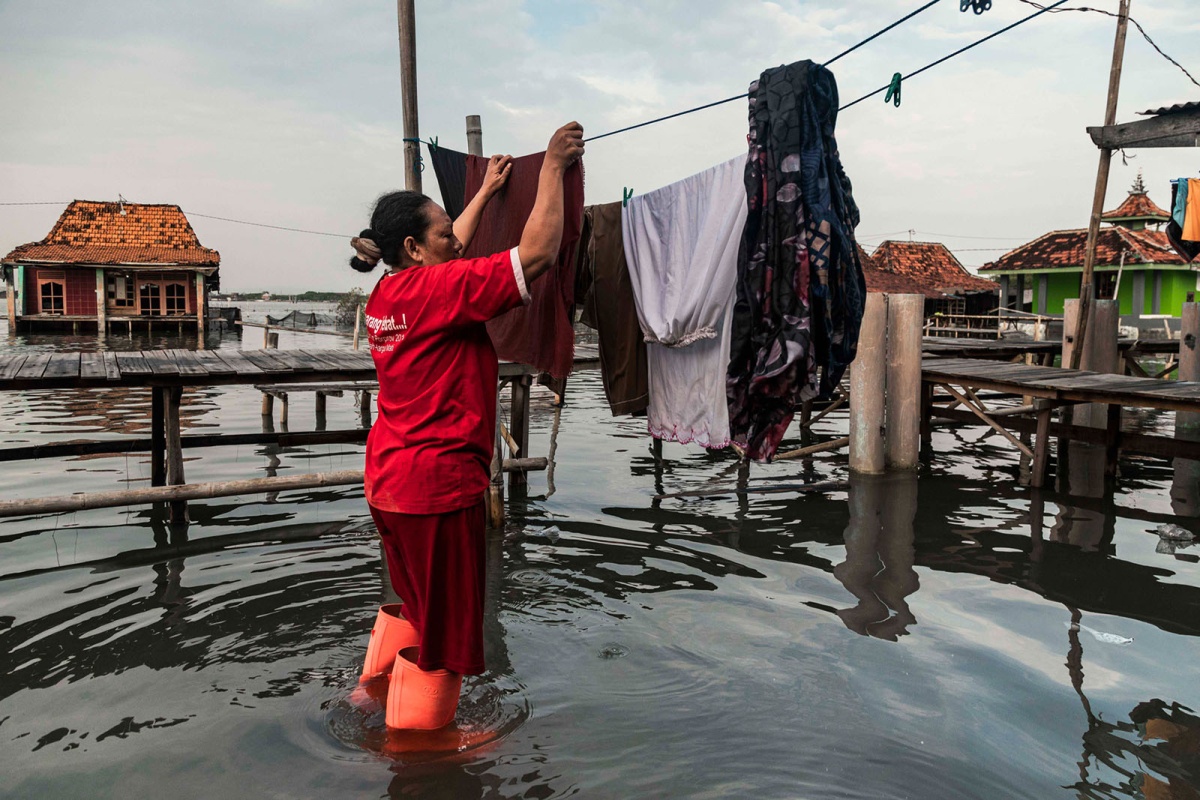 13
A woman drying clothes in a seawater pool in Timbulsloko, Demak. The sea has flooded this village. Indonesia 2021 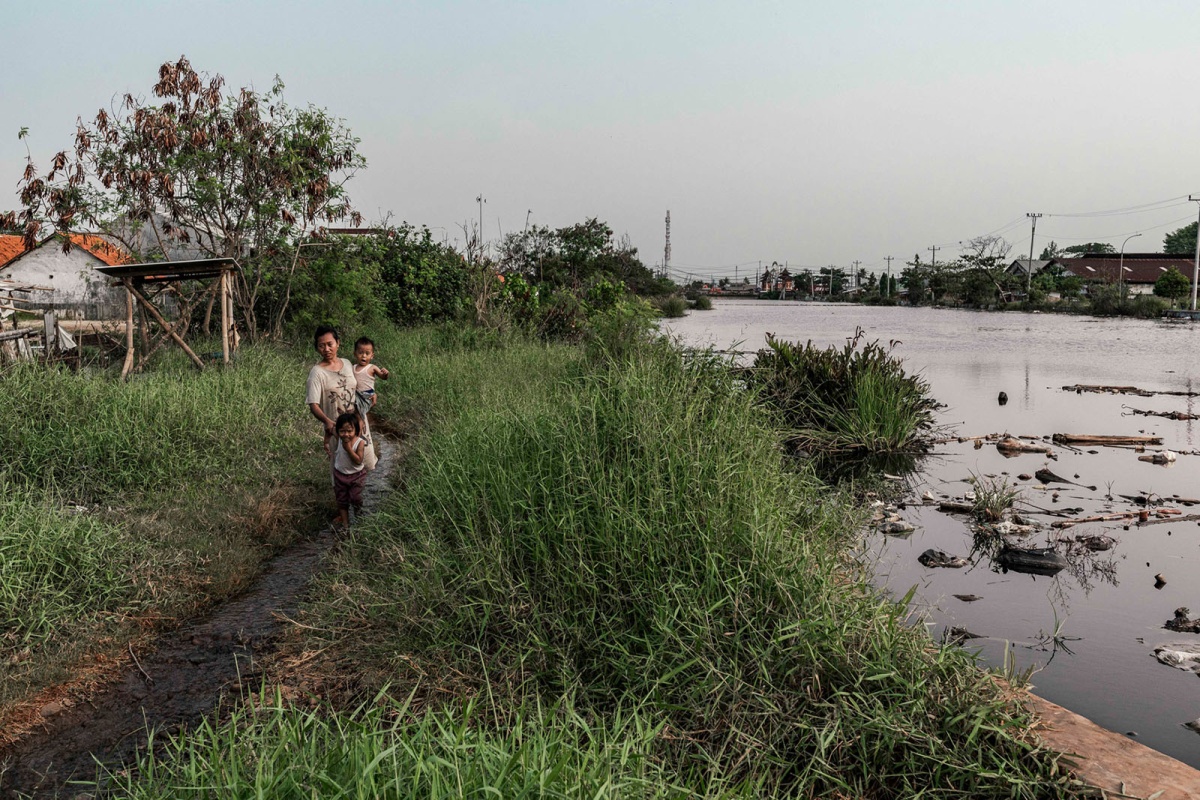 14
A woman and children walk by the banks of the overflowing Pencongan River in Pekalongan, Indonesia, during high tides on June 4, 2021 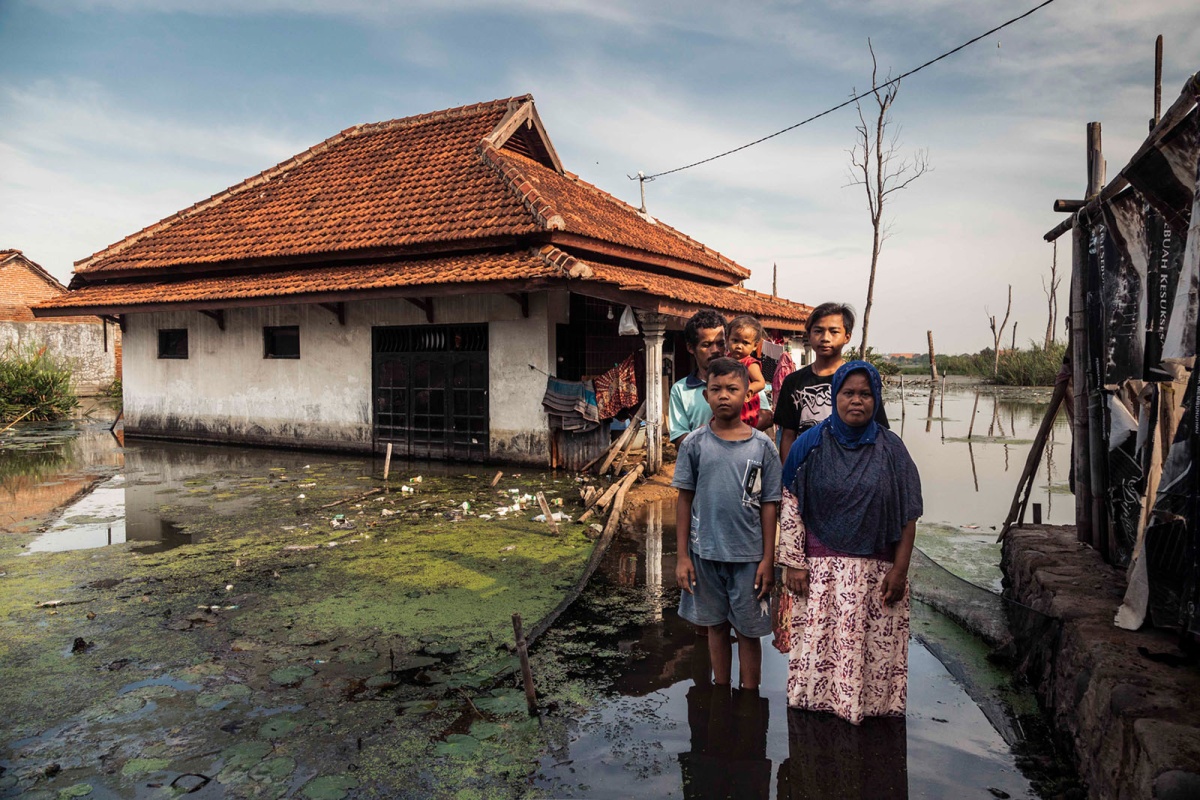 15
Although Nurhasanah, 45, and her family have a large house, they live in a very small space. The house is flooded by sea water. Indonesia 2020 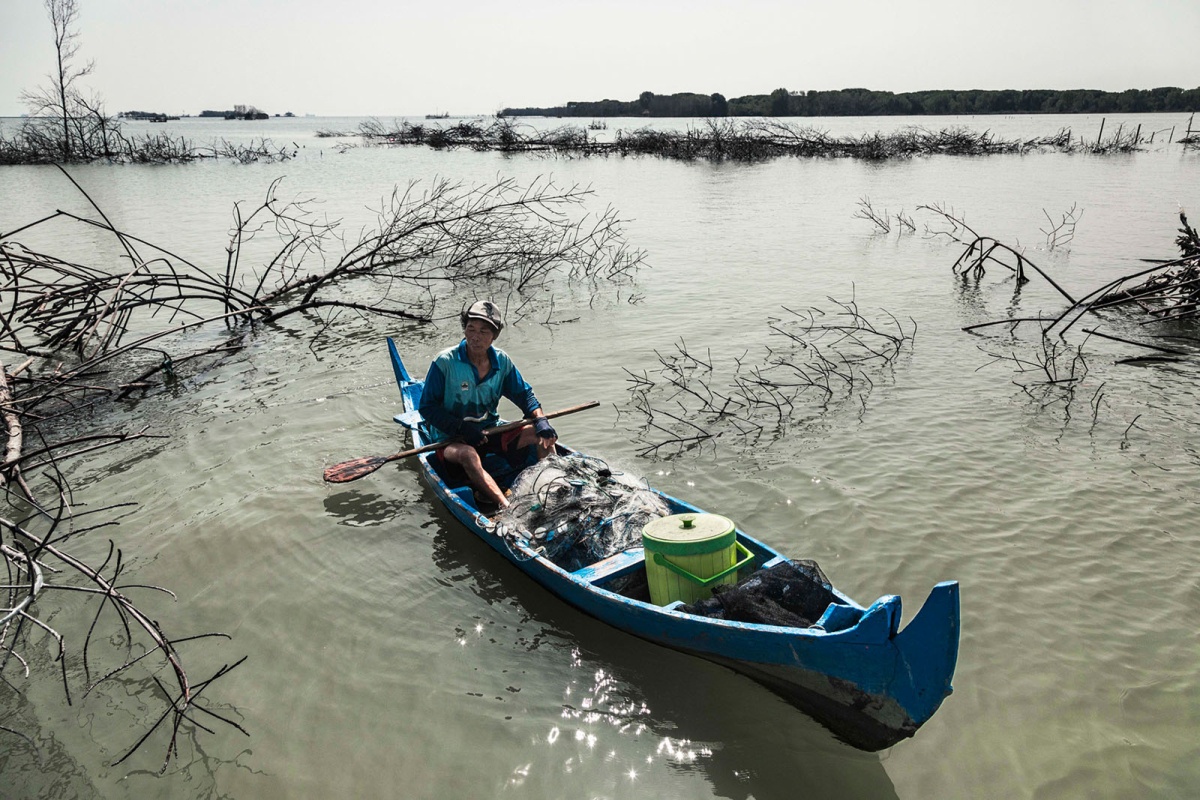 16
Rukani is fishing near his house. Although many families have now moved away from Senik Rejosari, he insists on staying. Indonesia 2021 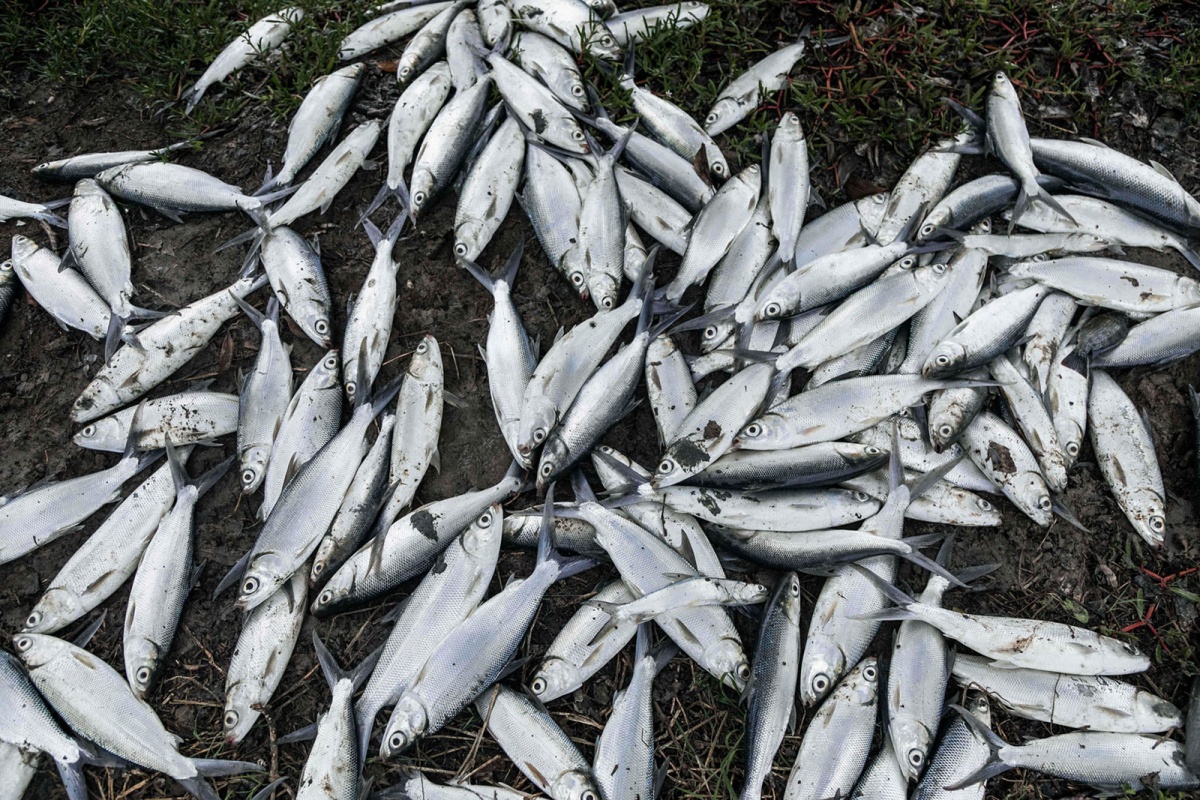 17
The quality of milkfish has decreased, but it is a more acceptable solution than losing the yield to the ocean. Indonesia 2020 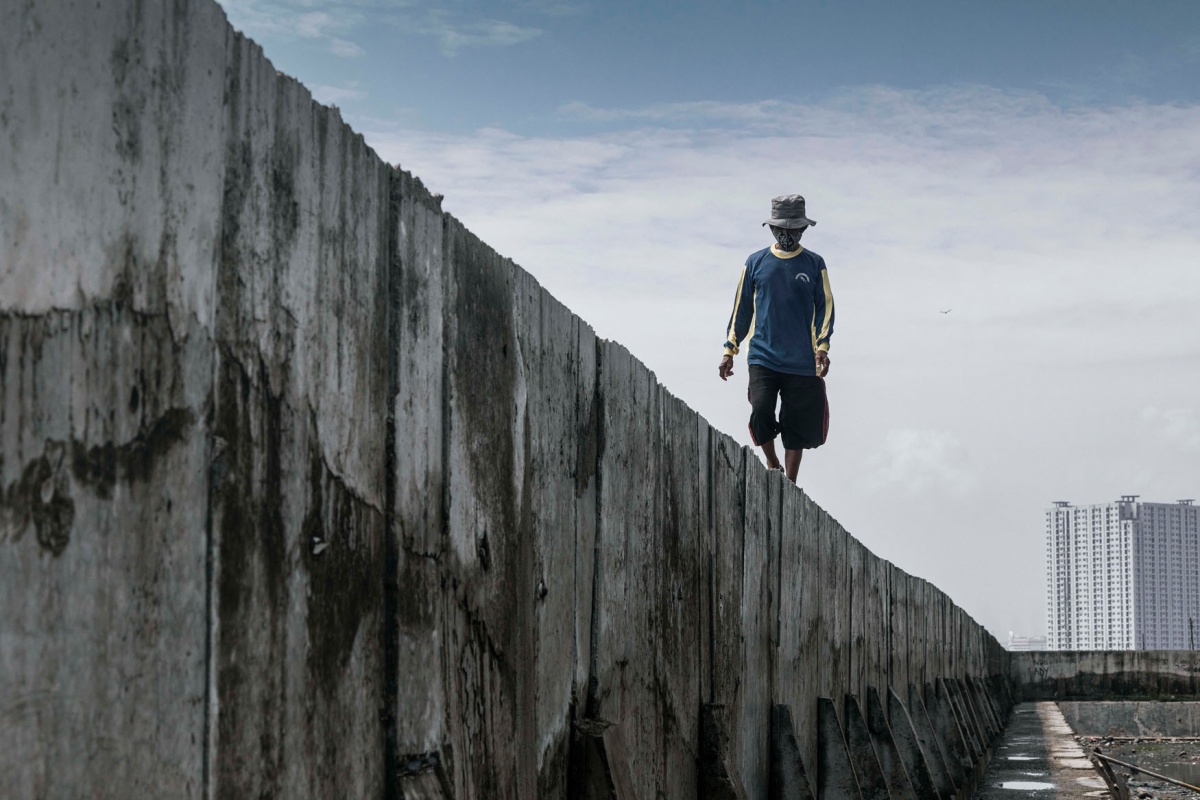 18
The construction of the eight-kilometre sea wall along the Jakarta coast began in 2014. Indonesia 2021 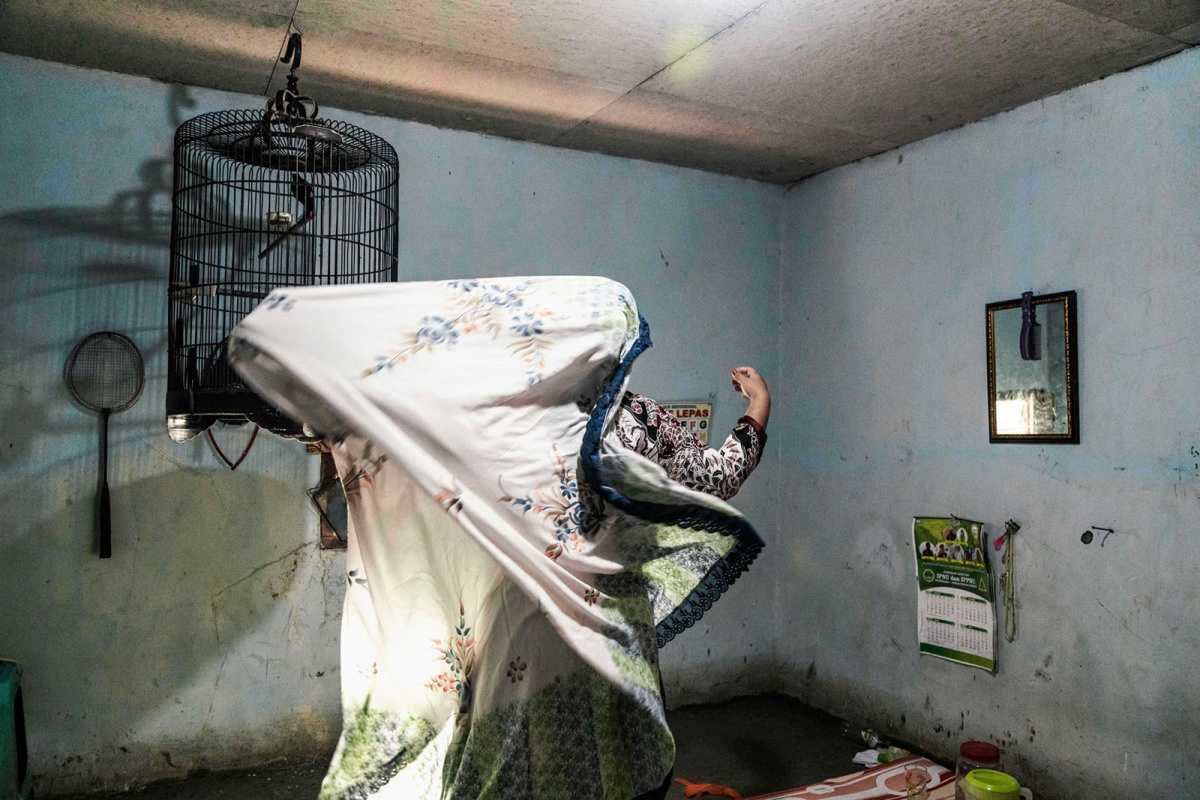 19
The family of Vina Milatul Azka, 36, work as batik artisans. To prevent the tidal flood, she has raised her foundation by two metres. Indonesia 2021 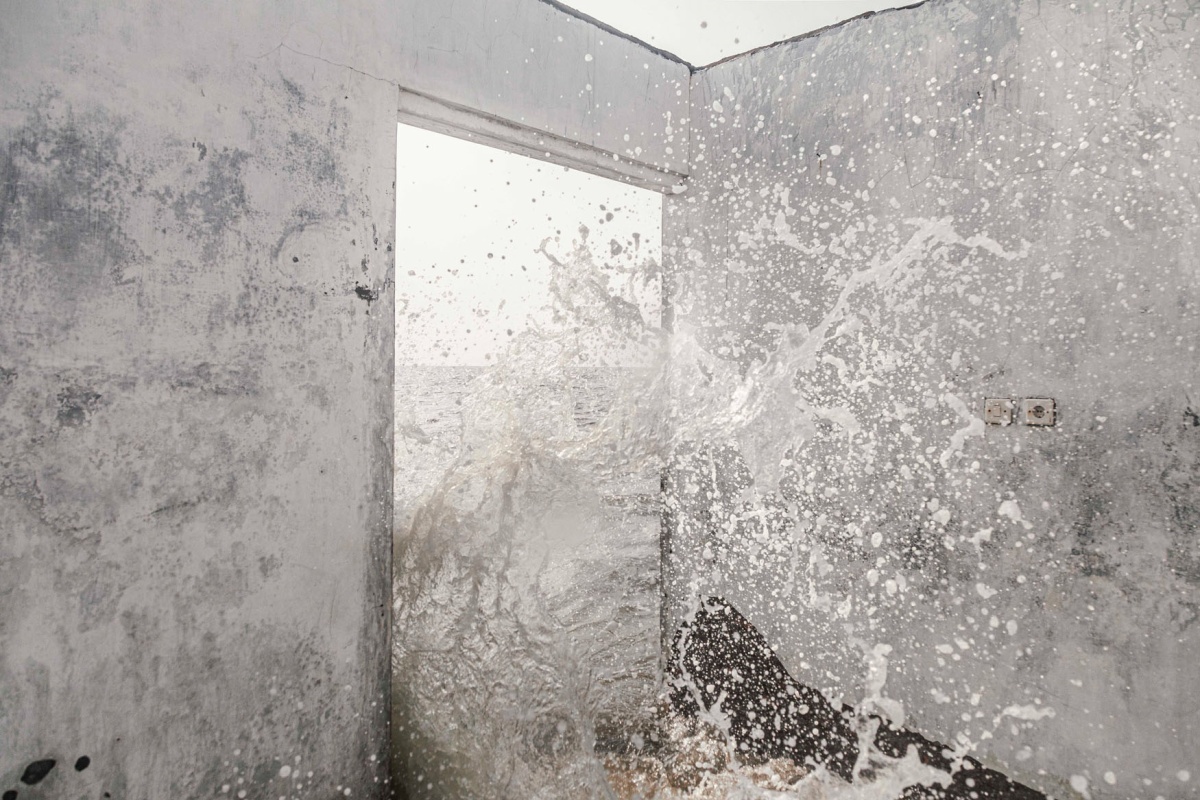