This year’s Leica Oskar Barnack Award (LOBA) process is entering its decisive stage. In the meantime, this year’s jury has assembled and made a selection from among the proposals submitted by the international nominators. This shortlist will be presented here on the LOBA website in July. It remains exciting. Until then, we continue our series of interviews with some of the nominators. This time, the Japanese gallerist and curator Naoko Ohta, who was also one of the LOBA nominators last year, talks about her work and experiences.

How have you experienced the changes in the photography scene, that have been shaped by the pandemic over the past year?

Covid-19 has certainly put a damper on the international photography market, including in Japan. At the same time, it has stimulated many photographers to challenge the pandemic’s many problems with new photographic energy. Some, who could not leave their homes or their immediate neighbourhoods, concentrated on what they could see from there. Others reported about the grievances suffered by people in many countries; either from a larger perspective or by showing very intimate scenes of suffering, renewed family ties or the happiness of healing. This may influence the market in a positive way, once the pandemic subsides.

What was particularly important for you personally?

Completing the 3 years/3 countries project of Tokyo Curiosity with the 100 participating photographers has been a great reward and motivation for my work as curator. This experience has been extremely valuable and will guide my future work. I am re-charging my batteries now, so I can embark on new projects.

What is this project about?

I've been working for decades with a group of almost 100 photographers, from Japan and more than 15 other countries. Since I founded the Tokyo-GA group, following the triple disasters of the 2011 earthquake, tsunami and nuclear accident in Japan, my special focus as a curator working with artists was on showing an imaginative and future-oriented image of Tokyo and its people, in contrast to the many rather dystopian portraits shown by the global media. Our role, as many understood after 2011, was also to play an important role in preserving precious memories.

Are these experiences also reflected in your LOBA nominations?

Twenty years have passed since the group was founded, and our focus now is on using the power of photography to contribute to a positive future, for humans living in a giant metropolis like Tokyo. Hence, in my choice of nominees, I was looking for work that makes the invisible visible, gives inspiration and insight, fosters the imagination, and enhances mutual understanding across people and country boundaries.

“Among the many reputable photographic awards, the Leica Oskar Barnack Award is quite unique.”

How do you regard the relationship between applied photojournalism and free work at LOBA?

On the one hand, photojournalism confronts us with defined topics, whether wars, social imbalances, natural or man-made disasters, and, on the other, shows us examples of the beauty of life, nature, and friendship. Free work, as the name suggests, is not bound by themes but can take any form. I believe, both can have a place in the same competition if the topic is broad and abstract enough.

What would you advise young photographers to do in order to become visible for support?

As a curator, I'm working with a number of new talents – though not necessarily only young people. My advice to these artists is that developing a widely recognized name as a photographer, requires an effort to produce and submit the very best work they can achieve, and to work on improving constantly. Recognition seldom happens overnight, but is the result of years of hard and often frustrating work with many setbacks. So, photographers must be very dedicated and patient; in other words, they must have grit.

“The LOBA’s unique nomination process is already a guarantor for a diverse body of work being submitted to the jury. The definition of the award’s goal, to see photography dealing with the relationship between humanity and environment, is broad enough and allows for endless interpretations.”

What are your wishes and hopes for photography in the future?

One of the many challenges for photographers and curators to face, is the explosive growth of smart phone photography with its sophisticated software technology. Another challenge is the never-ending proliferation of the so-called social media, with its many positive effects for global communication, but also, unfortunately, with its dark, even dangerous side. More than ever before, our roles as photographers and curators will be as guardians of truth.

Thank you very much for your time. 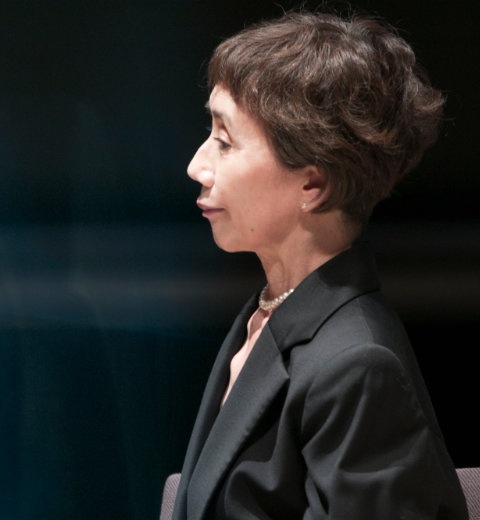 Naoko Ohta is a Japanese gallerist, curator, editor and senior lecturer (visiting Professor at Taisho University since 2013). She studied Art History at Waseda University, Japan, and at Cambridge, England. In 1987 she founded the Tokyo-based company Klee Inc. Paris Tokyo, and has organized over 250 mainly photography, art exhibitions, both in Japan and abroad, including “L’art de Rosanjin” at the Musee de Guimet, Paris. In 2011, she initiated the  “Tokyo-Ga – describing Tokyo scapes by 100 photographers” NPO, of which she is the chairman and chief curator, in order to document Tokyo in the aftermath of the triple catastrophes of March 2011. From 1999 to 2001, Ohta was the Japanese representative at Les Rencontres Internationales de la Photographie d’Arles. She was also an advisor specializing in Japanese photography, for the collection department of French National Library (BNF) from 1999 to 2014.