Anastasia Taylor-Lind, 5km from the Frontline

The war in Eastern Ukraine has defined the everyday lives of the people there for over six years. In her “5km from the Front Line” series, the British photographer (born 1981) turns her gaze towards the less obvious, but all the more devastating, consequences of the conflict. She reveals how people there have to deal with the constant threats and daily restrictions. 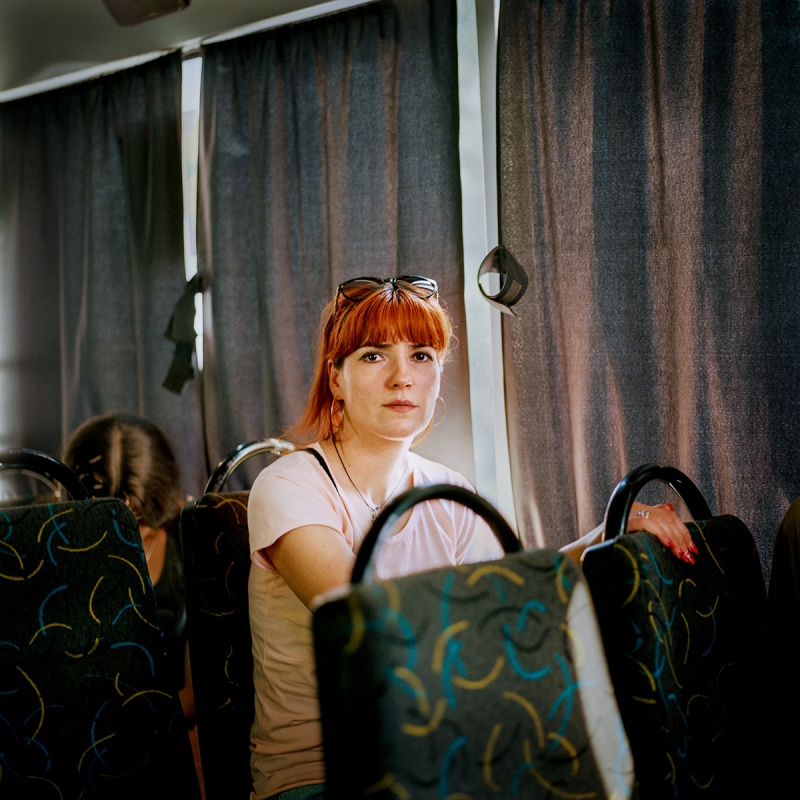 01
Marina Korneeva is 37, and works as a pharmacist. She has a husband and a ten-year-old son. Shortly before the war, they built a beautiful family house in Marinka, a suburb of the regional capital, Donetsk. When Donetsk was taken over by separatist forces, Marina’s neighbourhood became the frontline. It has been five years since then, and the family still has no access to the house. 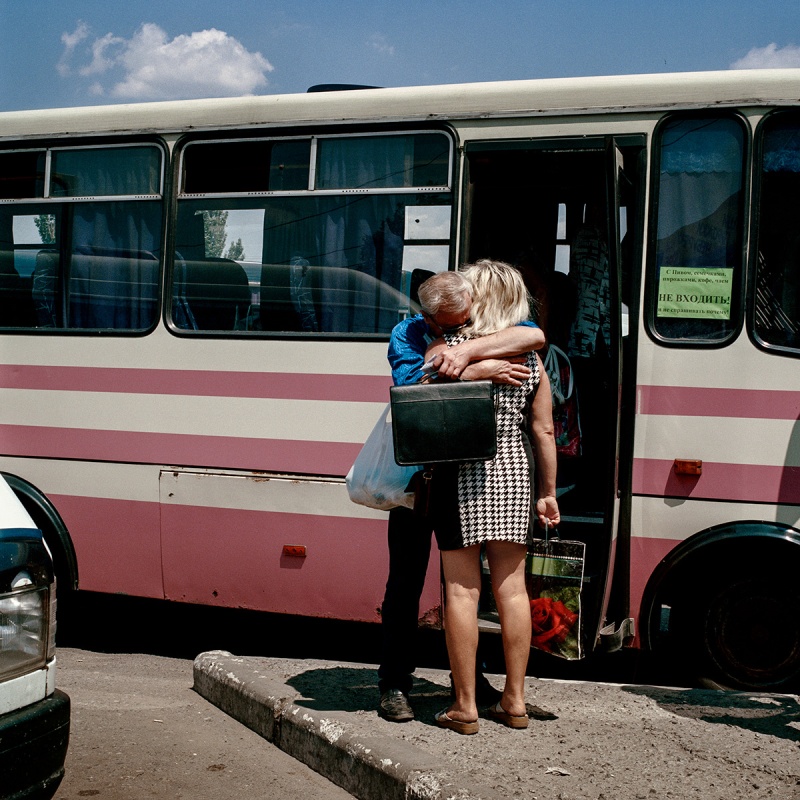 02
A bus departing from a frontline town of Kurakhovo to the entry checkpoint into non-government-controlled Donetsk. After reaching the checkpoint, passengers will have to queue for many hours in the middle of a minefield, waiting for their turn to cross. Over a million people cross the line every month. 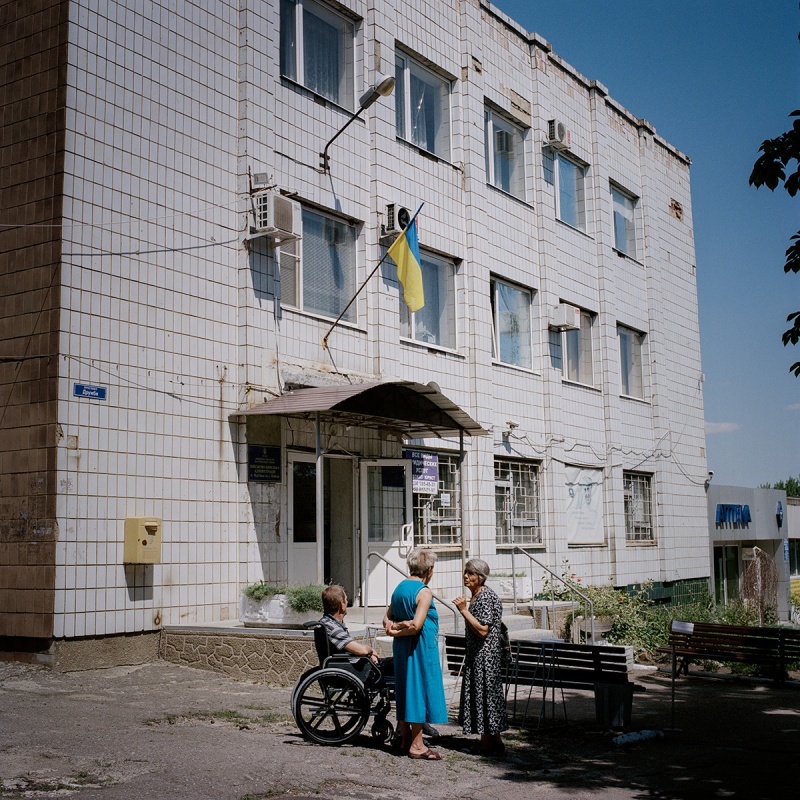 03
People congregate in front of a government office in downtown Marinka, where they usually seek humanitarian aid and compensation for destroyed housing. On the Ukrainian side of the frontline, alone, over one thousand apartment buildings and 12 thousand private houses have been damaged or destroyed during the war. 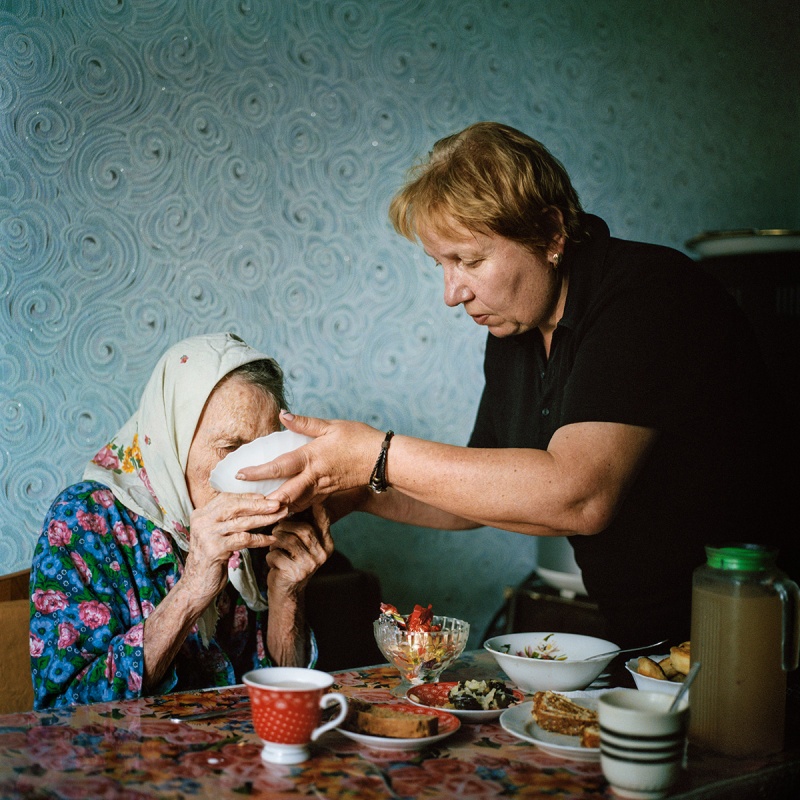 04
Tatiana Batskalyova cares for her 90-year-old mother-in-law, Lira. Prior to the war, both women used to live in a family house in the suburban village of Opytne, between Donetsk and Avdeevka. They had to flee, after their street became the frontline and a powerful explosion buried Lira, under the wreckage. 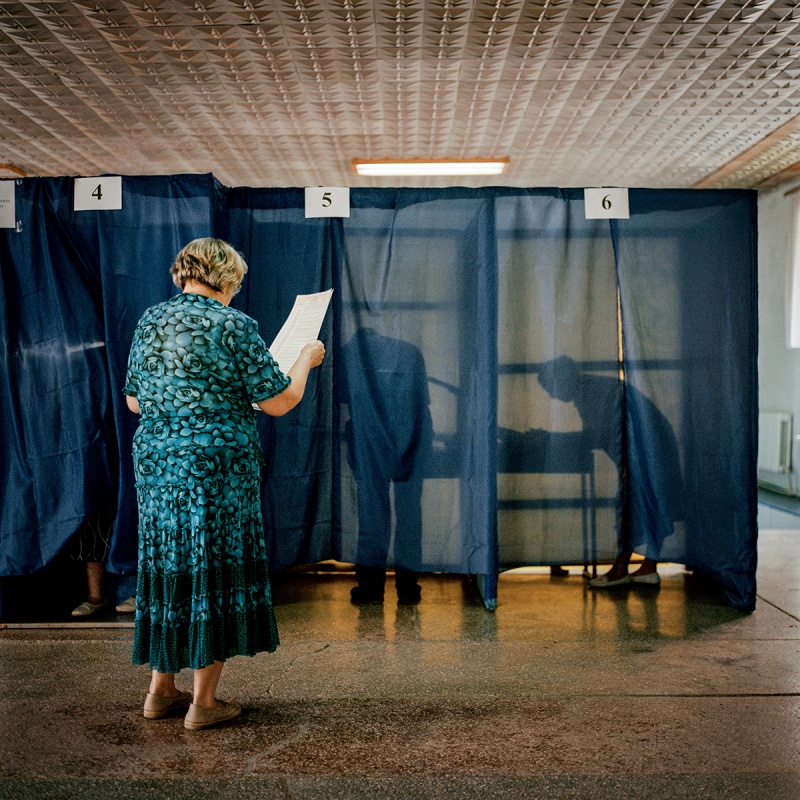 05
On the day of the parliamentary elections, July 21, 2019, Marinka. Despite the overall disappointment and distrust towards state authority that are prevalent among people living in the war zone, many of them see voting as a chance to change the situation. 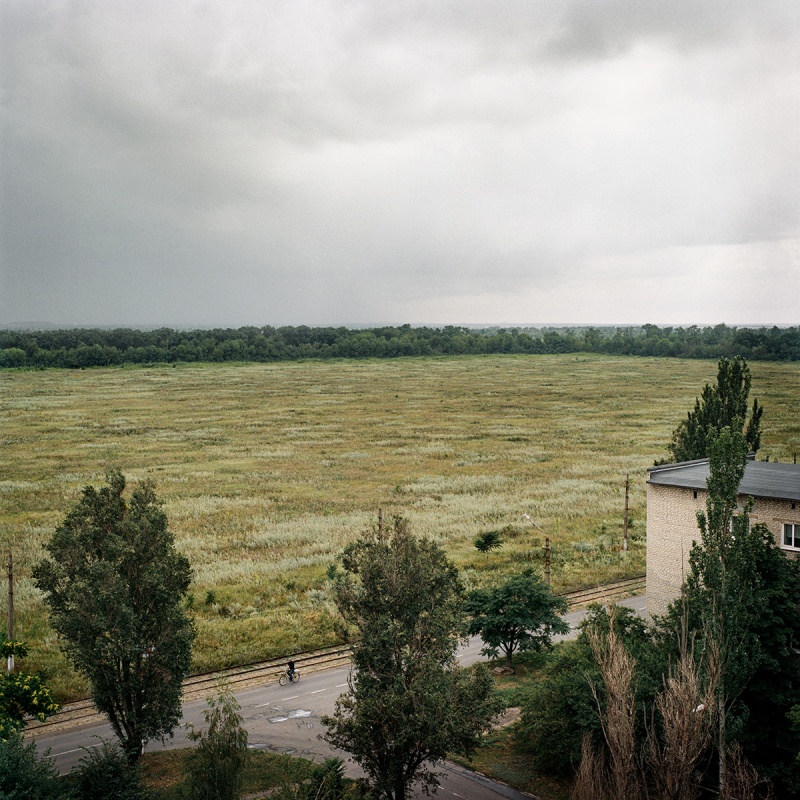 06
A view towards Donetsk from the ruins of an apartment building on the edge of Avdeevka. In the foreground is a minefield that borders this densely populated residential neighbourhood. 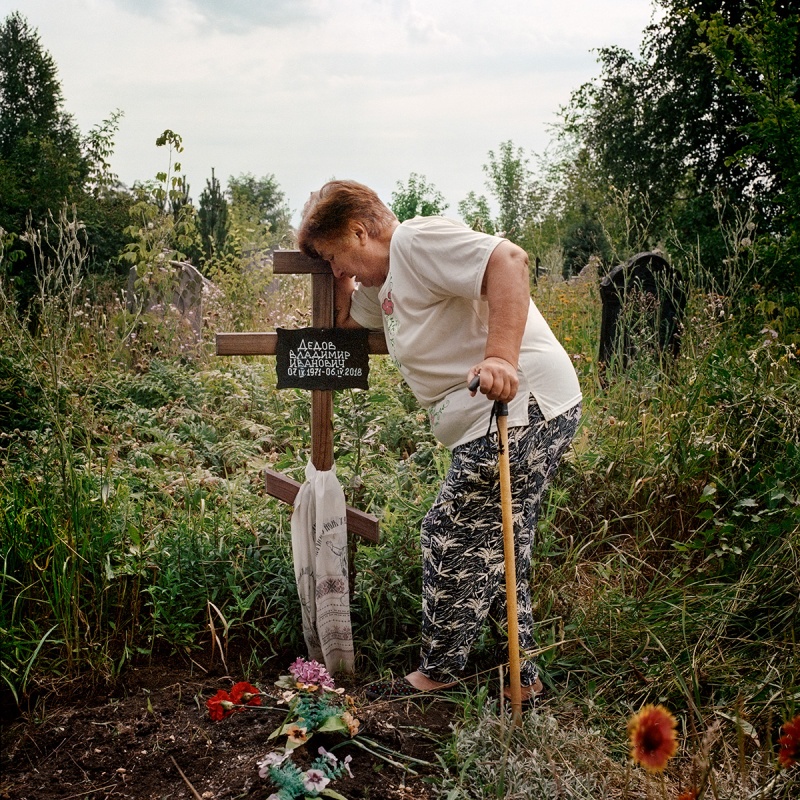 07
Anna Dedova, 75, at the grave of her son. He accidentally killed himself last year, when he opened a hand grenade he found near his home in the village of Opytne. 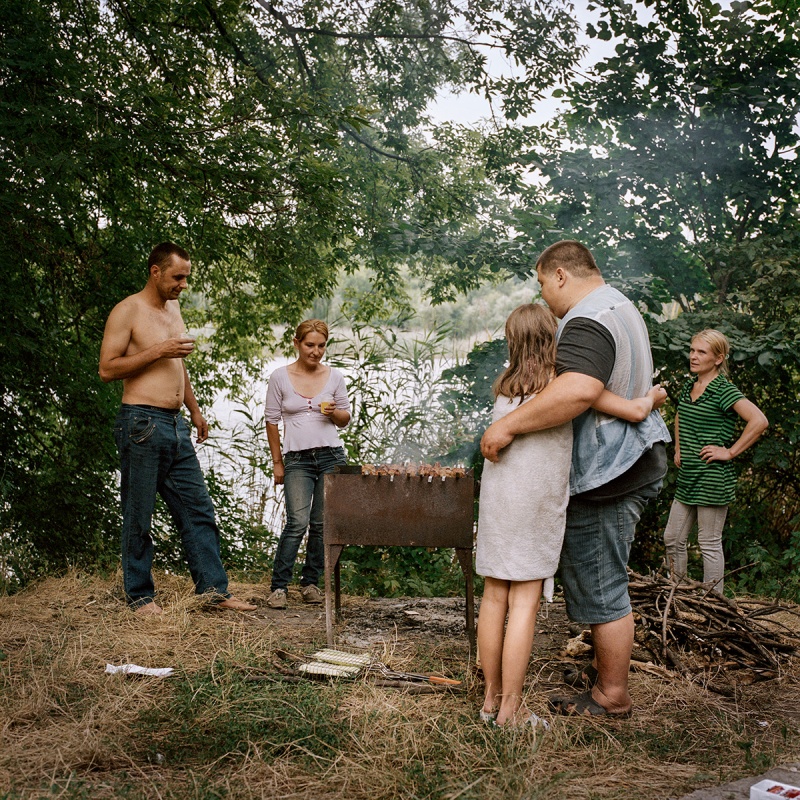 08
The Grinik family from Avdeevka grilling last summer. They are not only the subjects of reporting, but also friends. 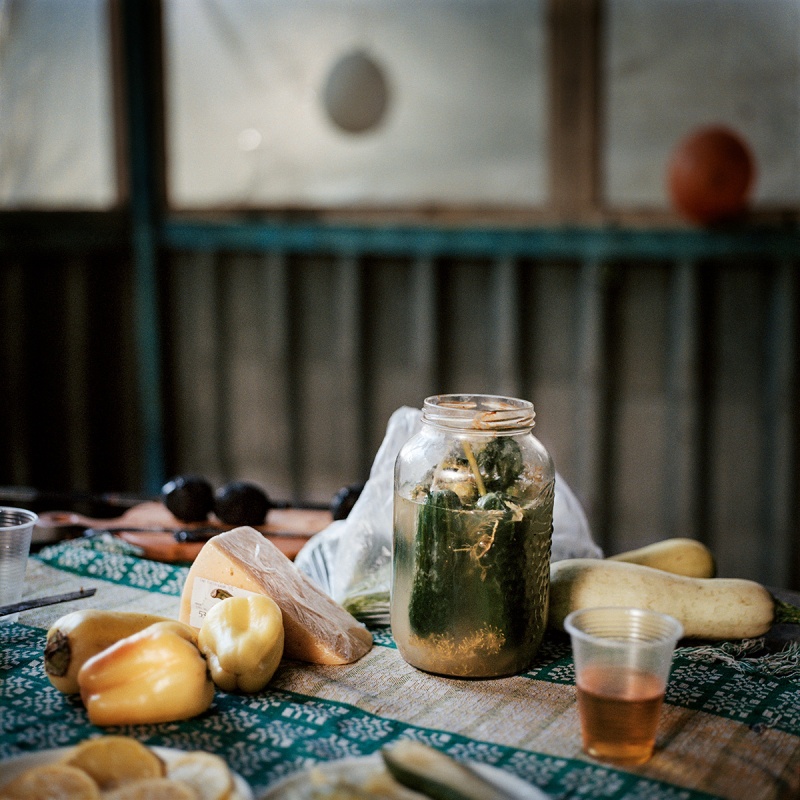 09
The Griniks live in a suburban neighbourhood called “old Avdeevka” which is very close to the frontline. They have a Ukrainian frontline military position as close as 50 metres away from their home. 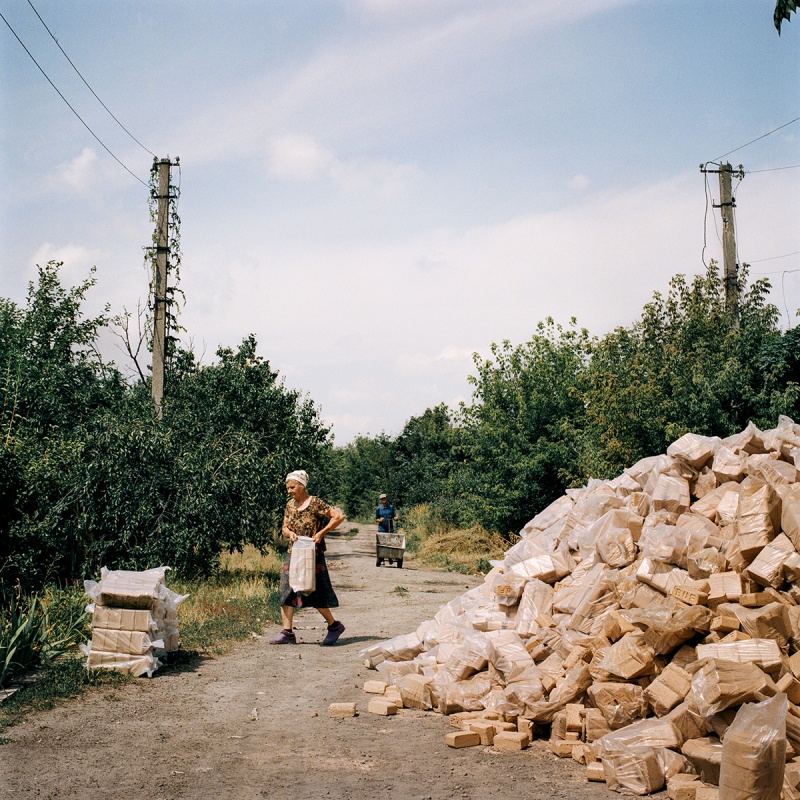 10
Villagers collect sawdust briquettes that have been delivered by the Red Cross to Opytne, a suburb in the grey zone between Avdeevka and Donetsk. The electrical, water and gas infrastructure in Opytne has been destroyed during the course of war; so this fuel will be used to heat homes all winter. 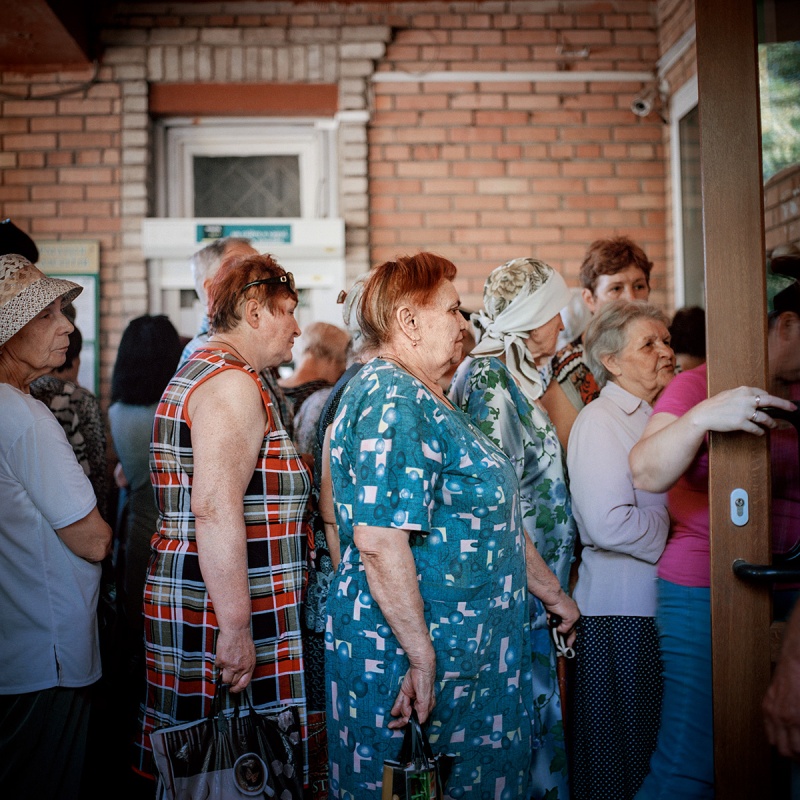 11
Pensioners queuing in front of a bank in the town of Kurakhovo, 20 kilometres away from the frontline. About four million Ukrainian citizens reside in non-government-controlled territories. 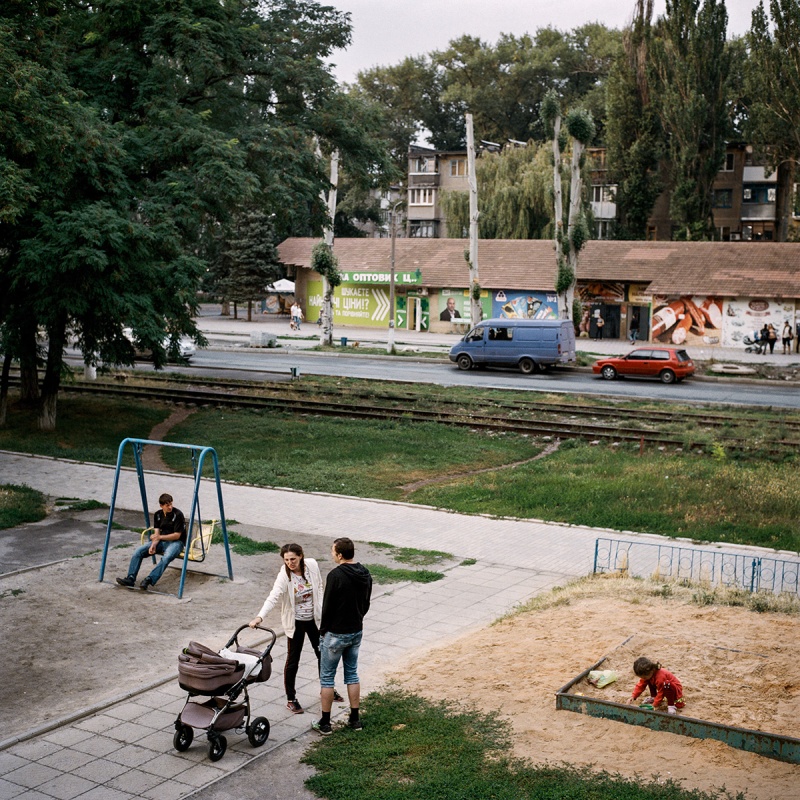 12
For most women, having a baby presents some challenges; but if you happen to live in Avdeevka, things get even more complicated. During the war, only one gynaecologist remained in town. 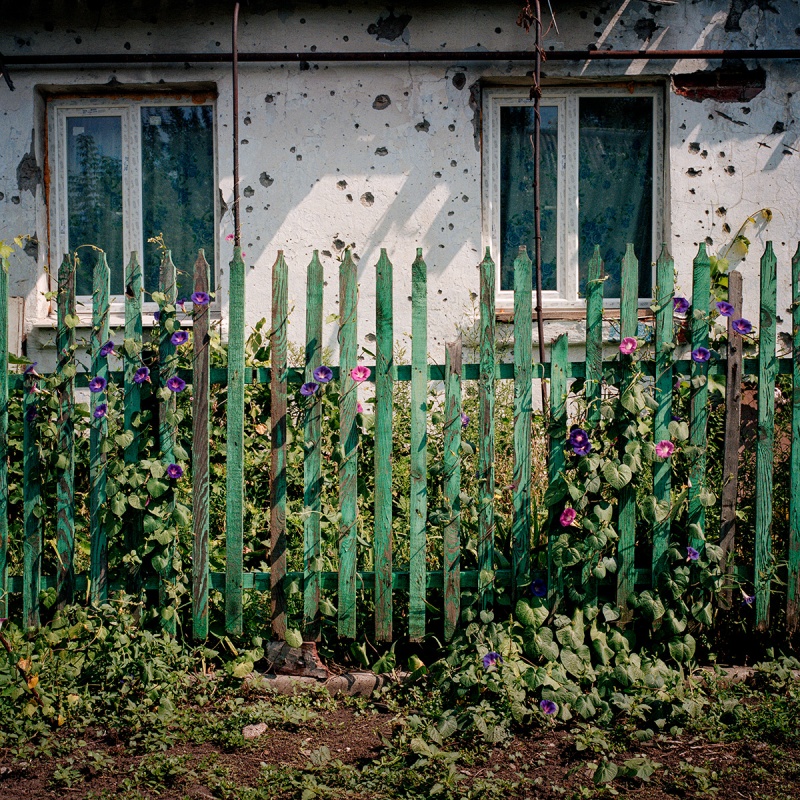 13
A shelled house in Opytne, a suburban village in the grey zone between Avdeevka and Donetsk. The village has suffered badly over the course of the war. It has no electricity, running water or gas, no groceries supply and no post office. 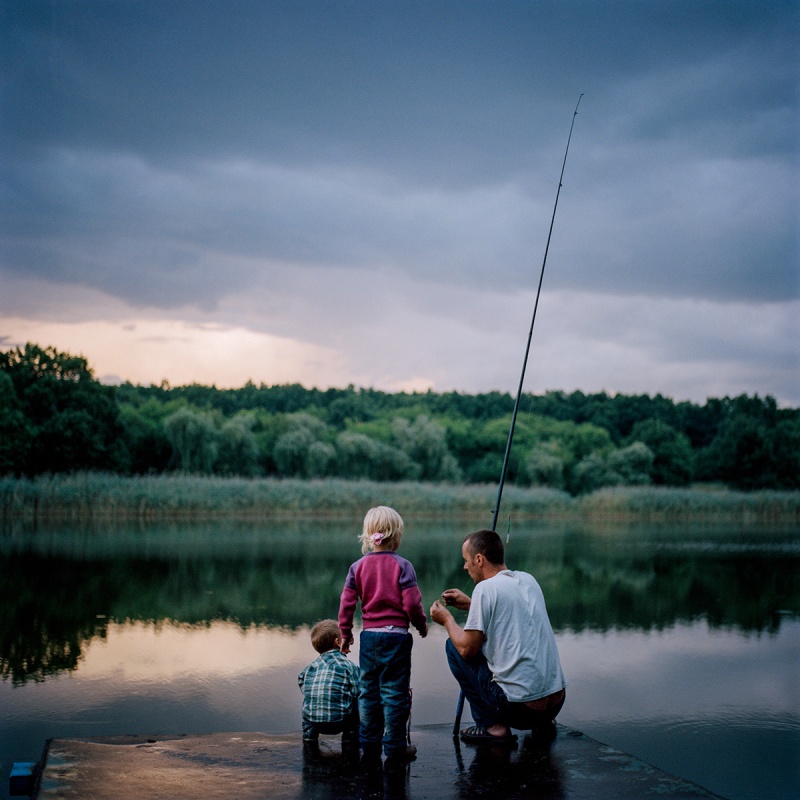 14
Despite all the difficulties, the Grinik Family is a happy and laid-back young family. Here, they are seen fishing, after a drive of about 20 minutes in order to get to a site relatively free from landmines. 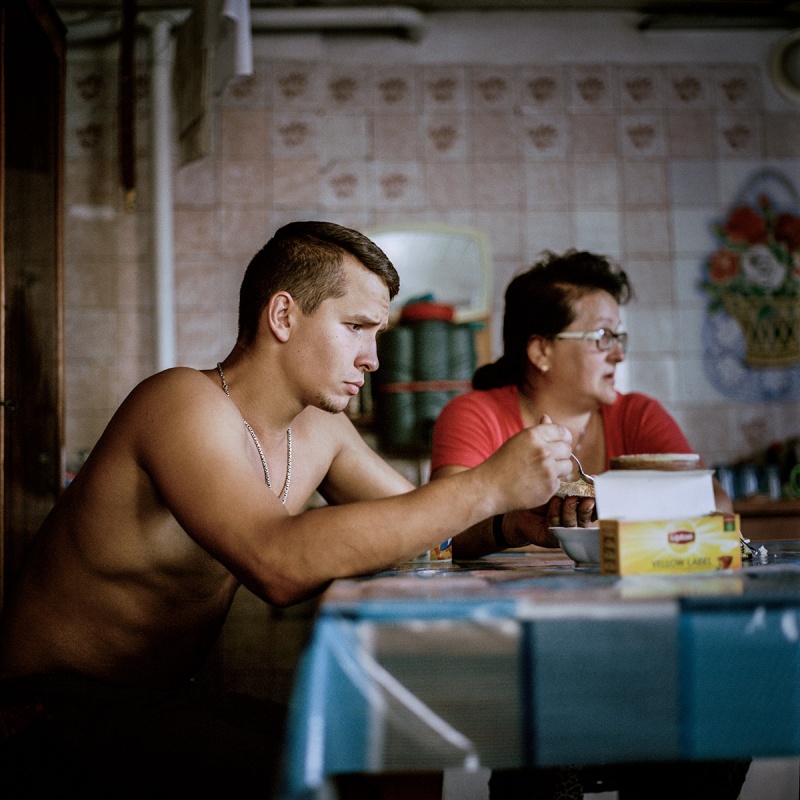 15
Viktor Lebedev and his mother Elena in their summer kitchen, where the family now lives after their house was heavily shelled. 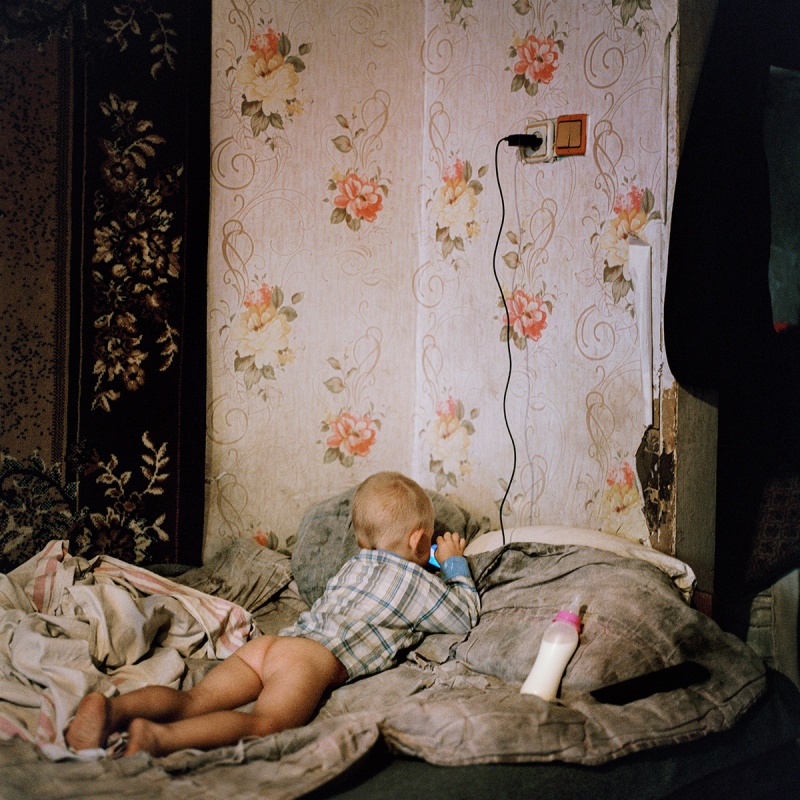 16
Three-year-old Kirill Grinik at his family’s house. He was born during the war and has never seen his native town of Avdeevka at peace. 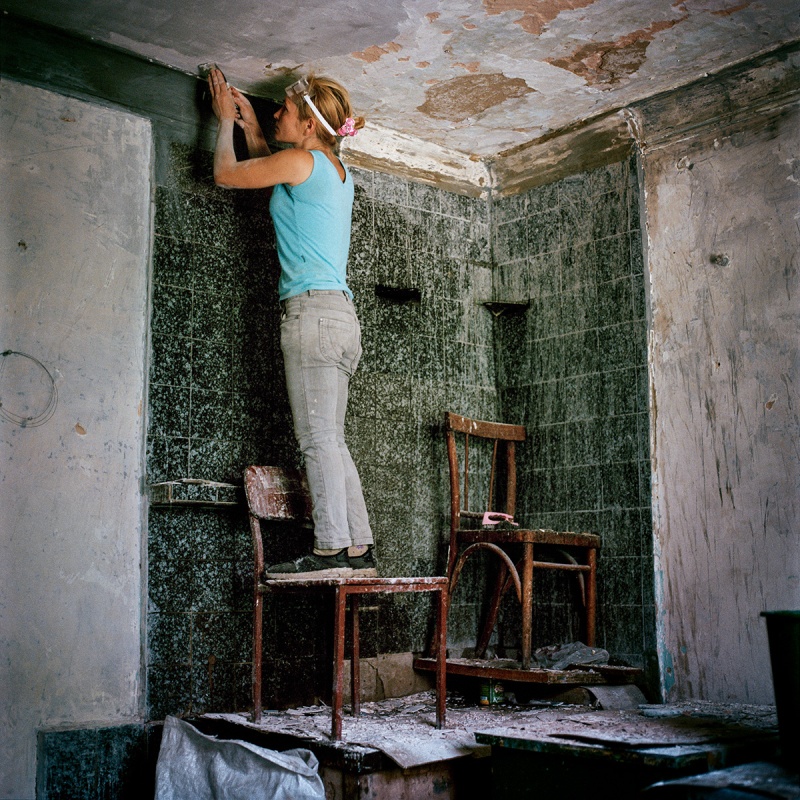 17
Valentina Mountyan helps a neighbour repair her bakery, which was damaged by shelling, in Avdeevka. 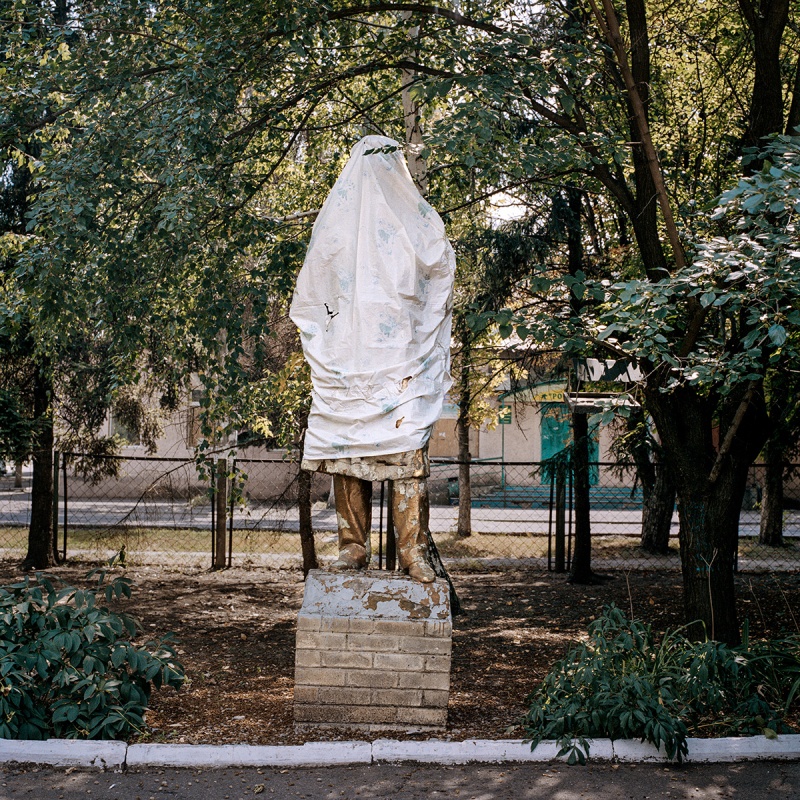