Santi Palacios, On the Edge

The powerfully dramatic moments were taken at close range, along the three most important migration routes that pass over the Mediterranean Sea and connect Africa and the Middle East to Europe. From 2013 to 2020, the Spanish photojournalist (born 1985) accompanied people who were following these different routes, taking the life-threatening journey in the hope of a new and safer life. 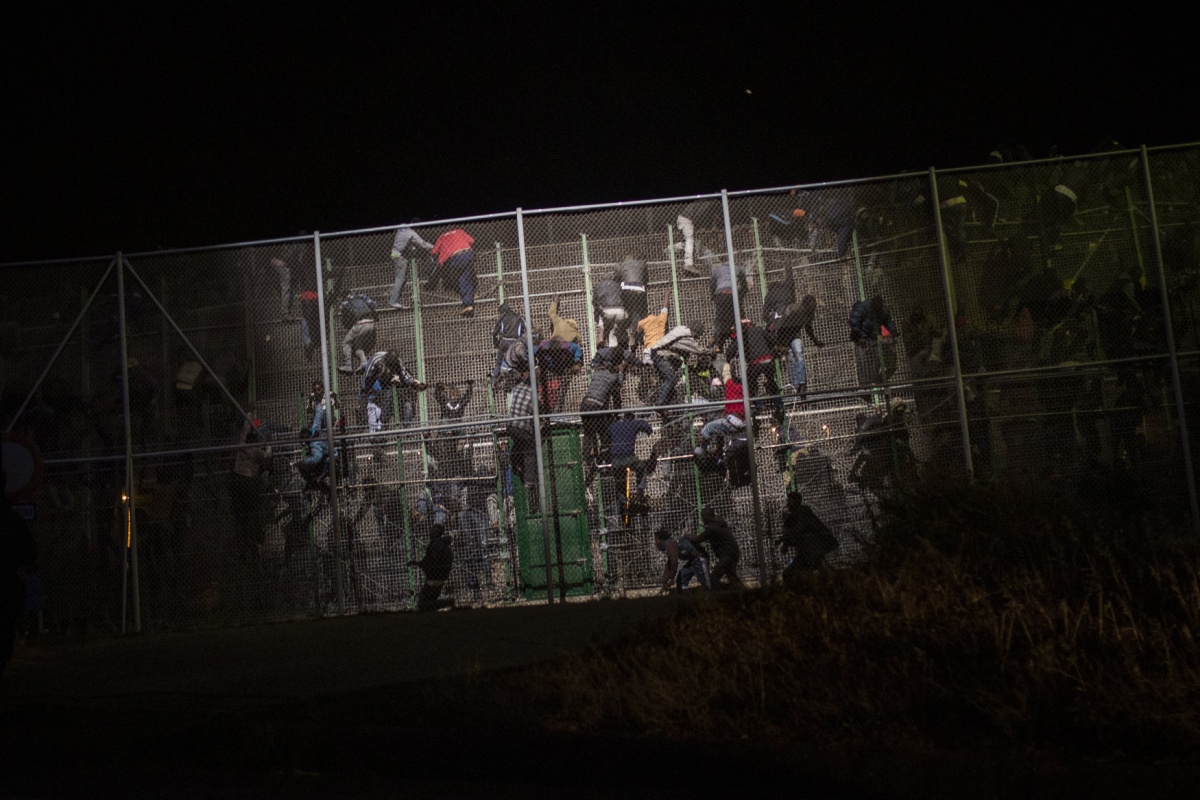 01
Sub-Saharan migrants scale a metallic fence that divides Morocco and the Spanish enclave of Melilla, early in the morning on Wednesday, May 28, 2014 02
In this photo, taken on Wednesday, March 19, 2014, sub-Saharan immigrants, some of whom are wounded after climbing a fence, stand inside a temporary camp set up for immigrants who gained access to the Spanish enclave of Melilla 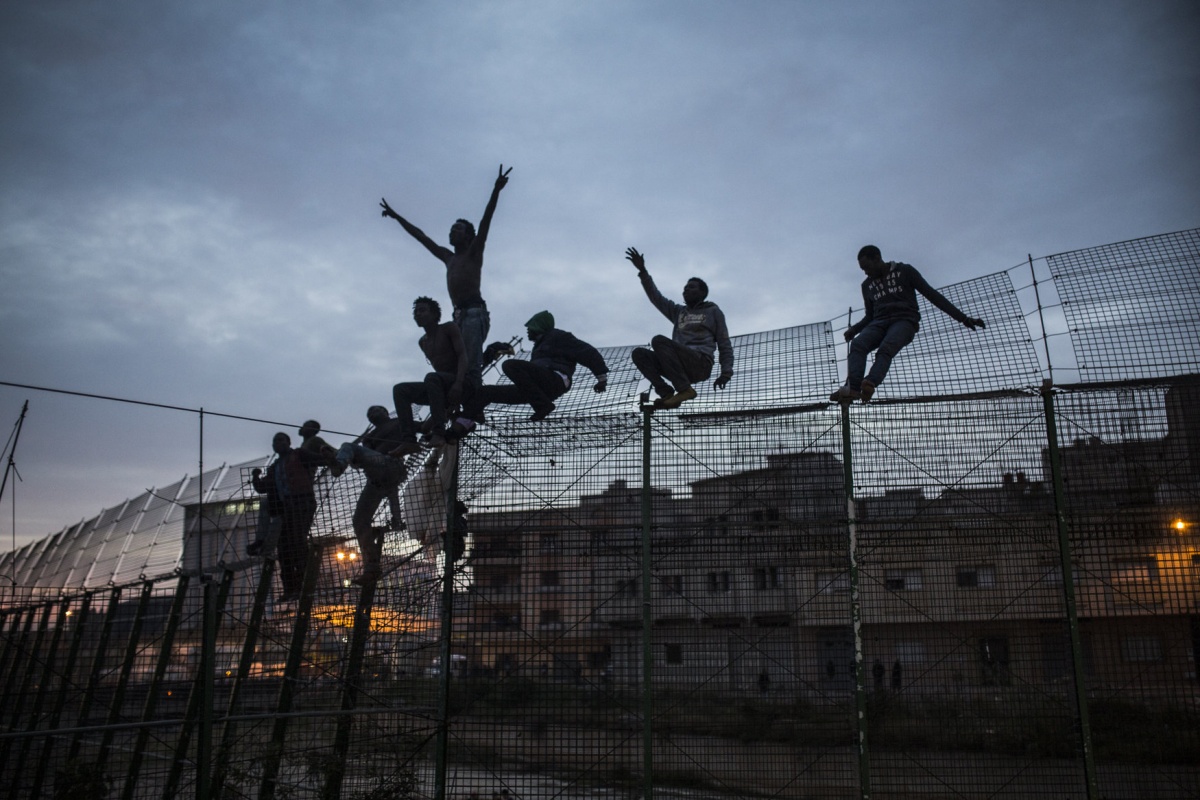 03
Several hundred African migrants tried to cross barbed-wire border fences to enter the Spanish enclave of Melilla from Morocco, but most were blocked by Moroccan police or pushed back by the Spanish Guardia Civil. March 28, 2014 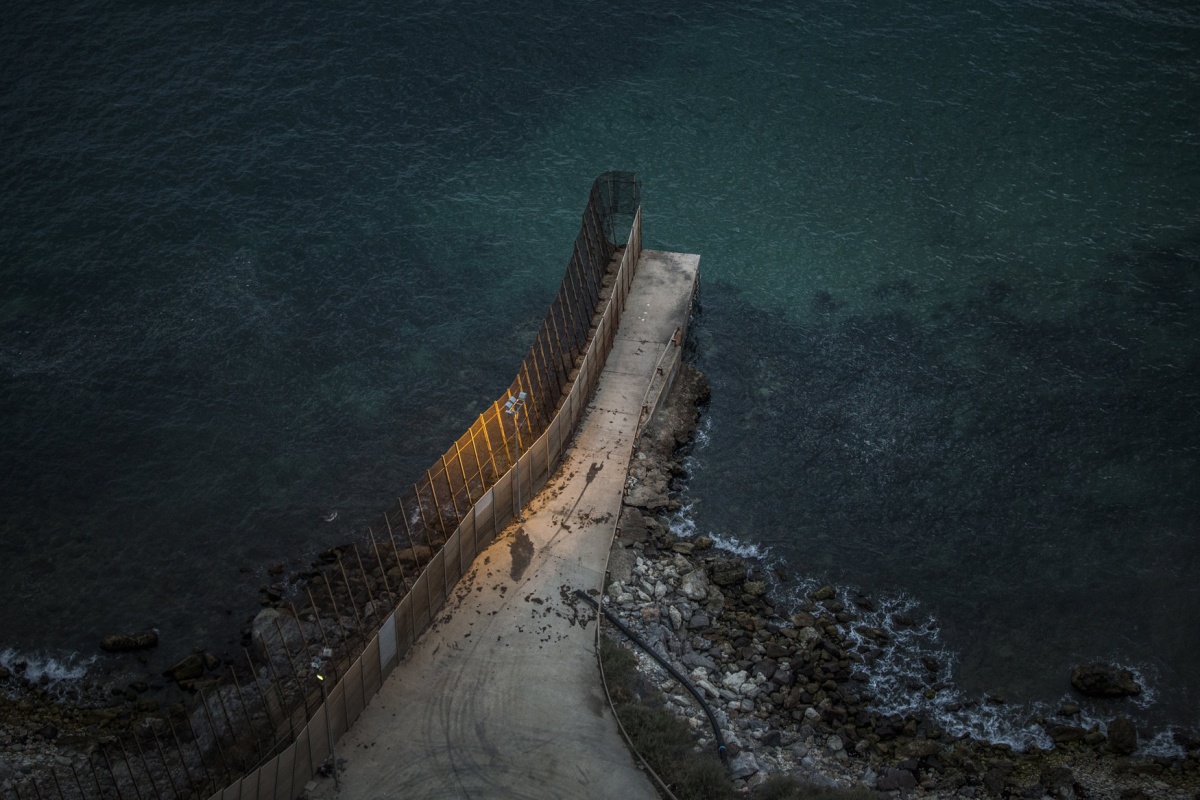 04
The metal fence that divides the Moroccan province of Nador and the Spanish enclave of Melilla enters the sea at its northern limit, seen from the Spanish side of the border. July 10, 2014 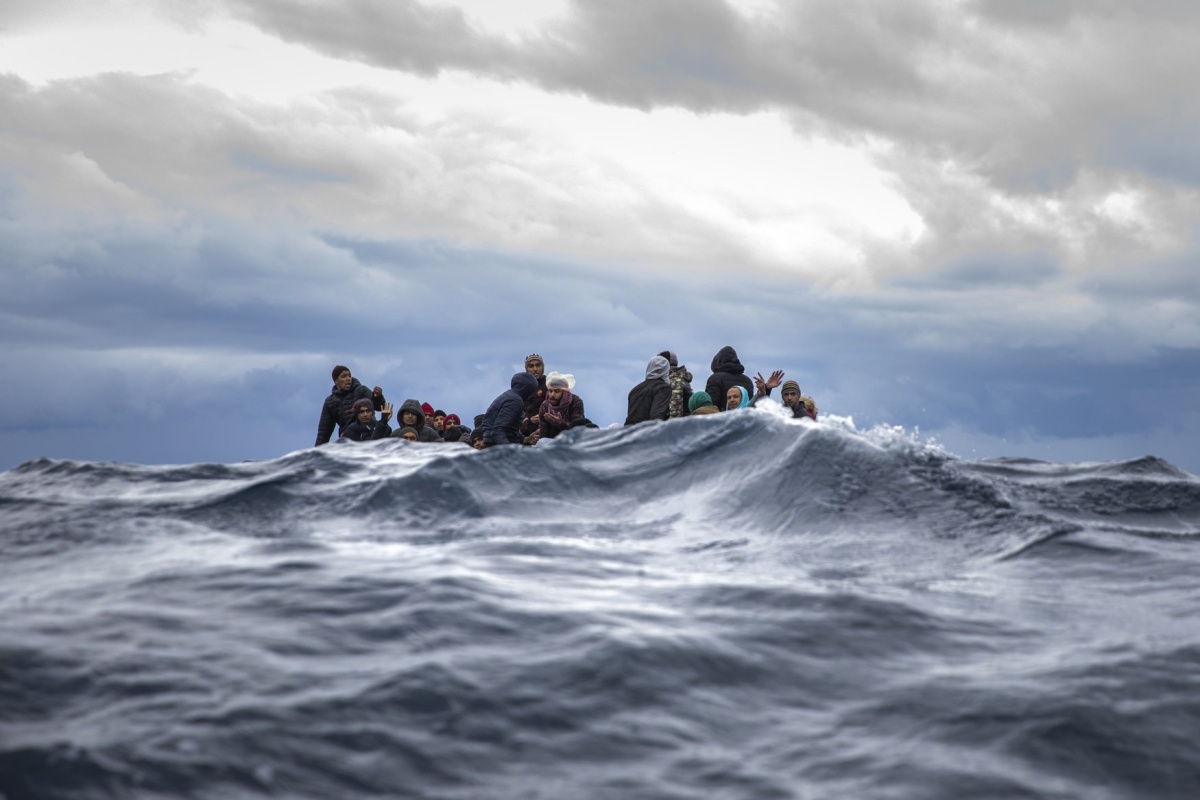 05
Men from Morocco and Bangladesh react, on an overcrowded wooden boat, as aid workers of the Spanish NGO Open Arms approach them in the Mediterranean Sea, in international waters, off the Libyan coast. January 10, 2020 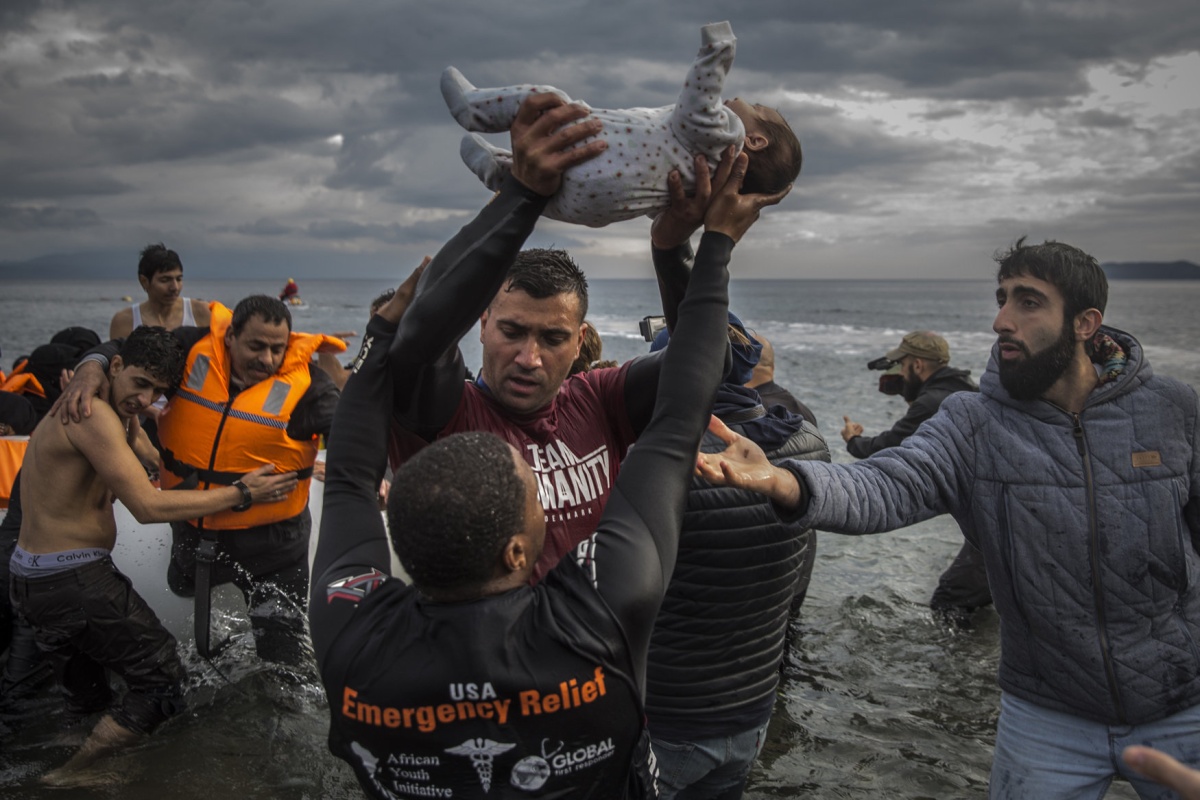 06
A volunteer helping migrants in Lesbos holds up a baby, while several families disembark from a dinghy, after their journey from the Turkish coast and arrival on the Greek island of Lesbos. November 25, 2015 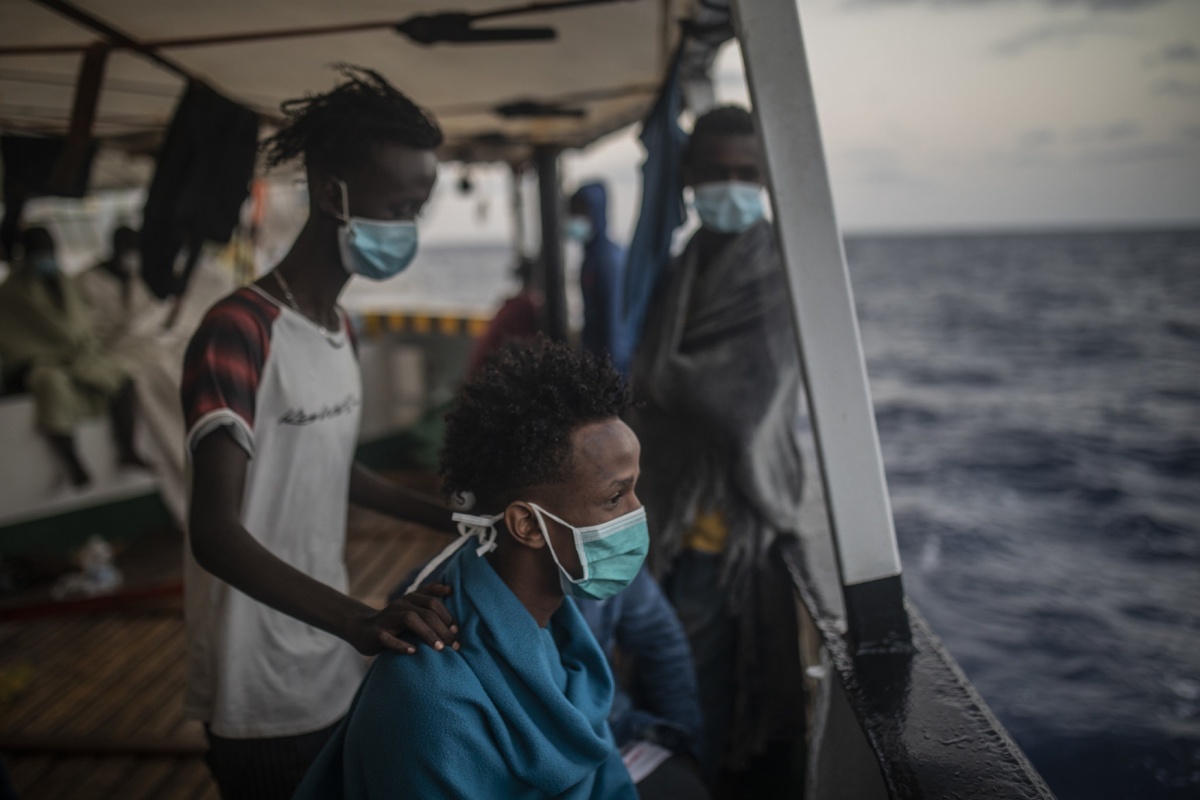 07
Migrants, mainly from Somalia, Egypt and Morocco, including 14 minors and four women, rest on board the Spanish NGO Open Arms vessel, after being rescued the night before. December 9, 2020 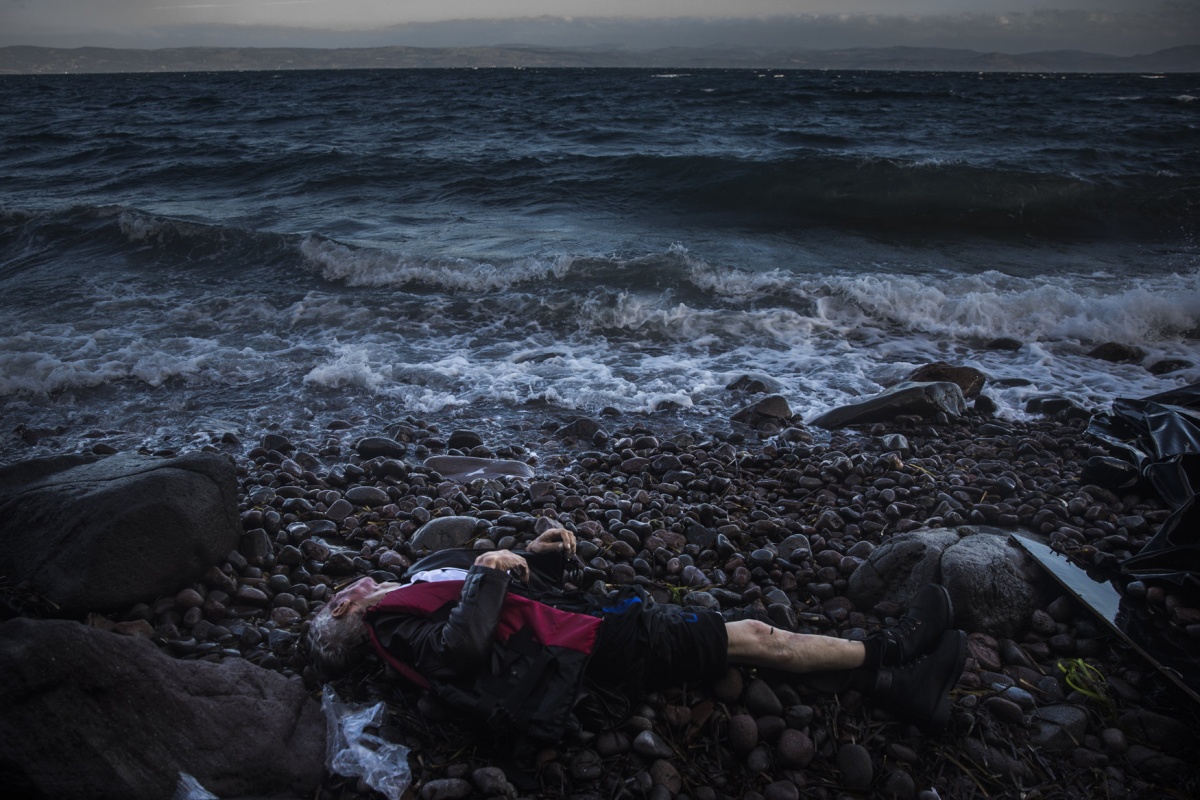 08
The lifeless body of an unidentified man lies on the shore at the village of Skala, on the Greek island of Lesbos, three days after a ship carrying more than 300 people capsized while crossing the Aegean, between Turkey and Lesbos. November 1, 2015 09
Taken through a car window, this photo shows piles of life jackets, used by refugees and migrants to cross the Aegean from the Turkish coast, stacked on the north-eastern Greek island of Lesbos. Thursday, January 7, 2016 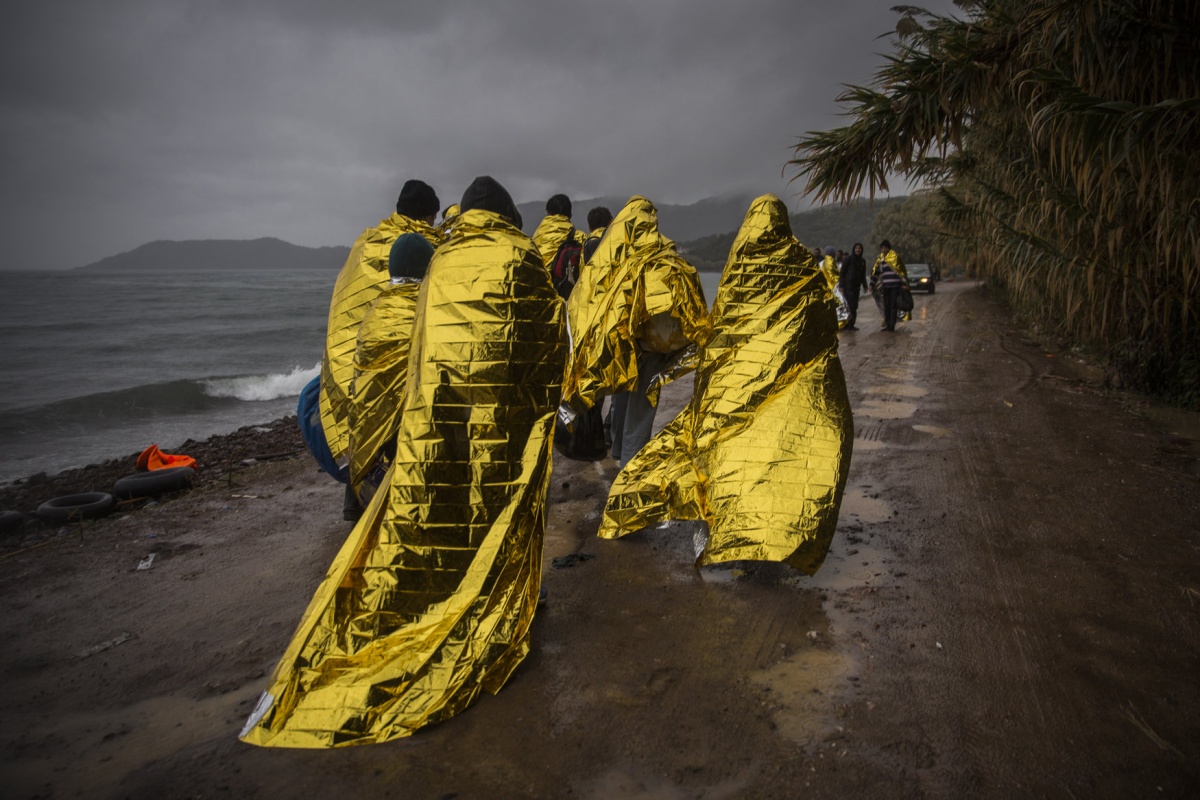 10
Men cover themselves with thermal blankets, after facing extremely harsh weather conditions while crossing the Aegean Sea aboard a rubber boat, from the Turkish coast to the northern coast of the Greek island of Lesbos. Friday, October 23, 2015 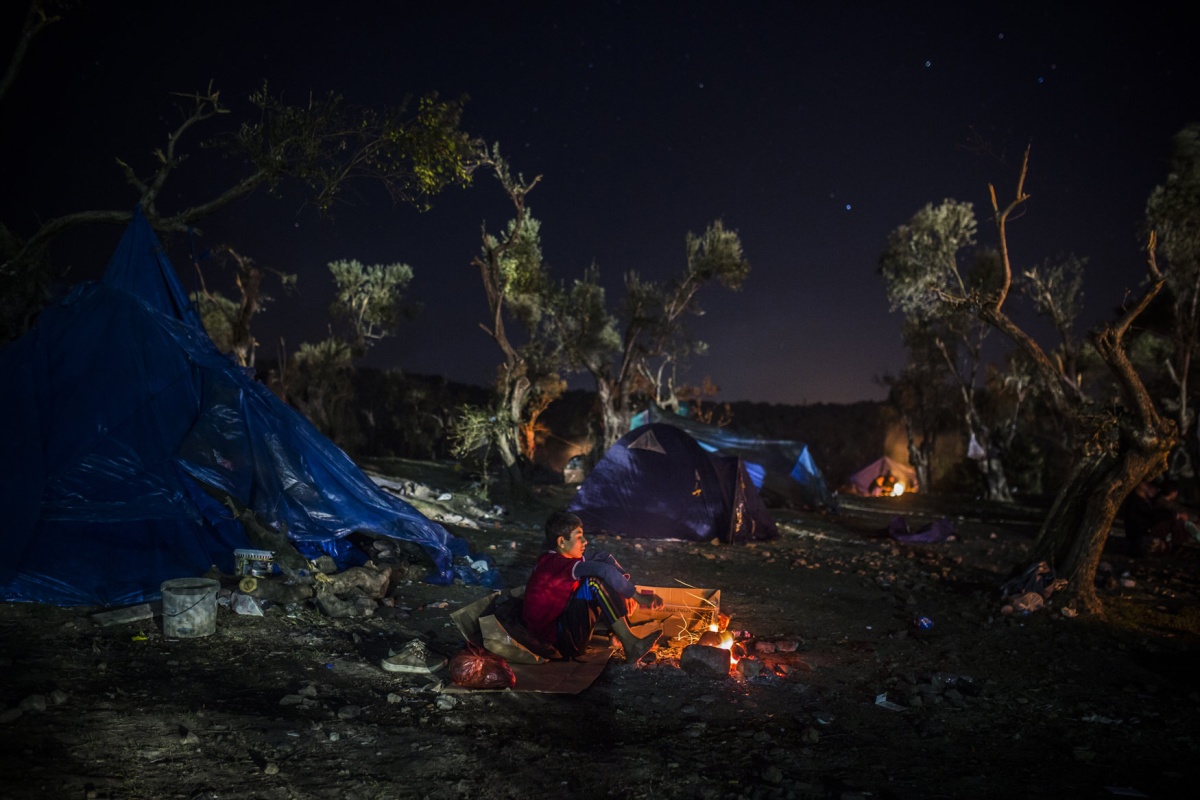 11
An Afghan boy tries to warm up next to a makeshift fire, outside a registration center for migrants in Moria village, on the northeastern Greek island of Lesbos. November 17, 2015 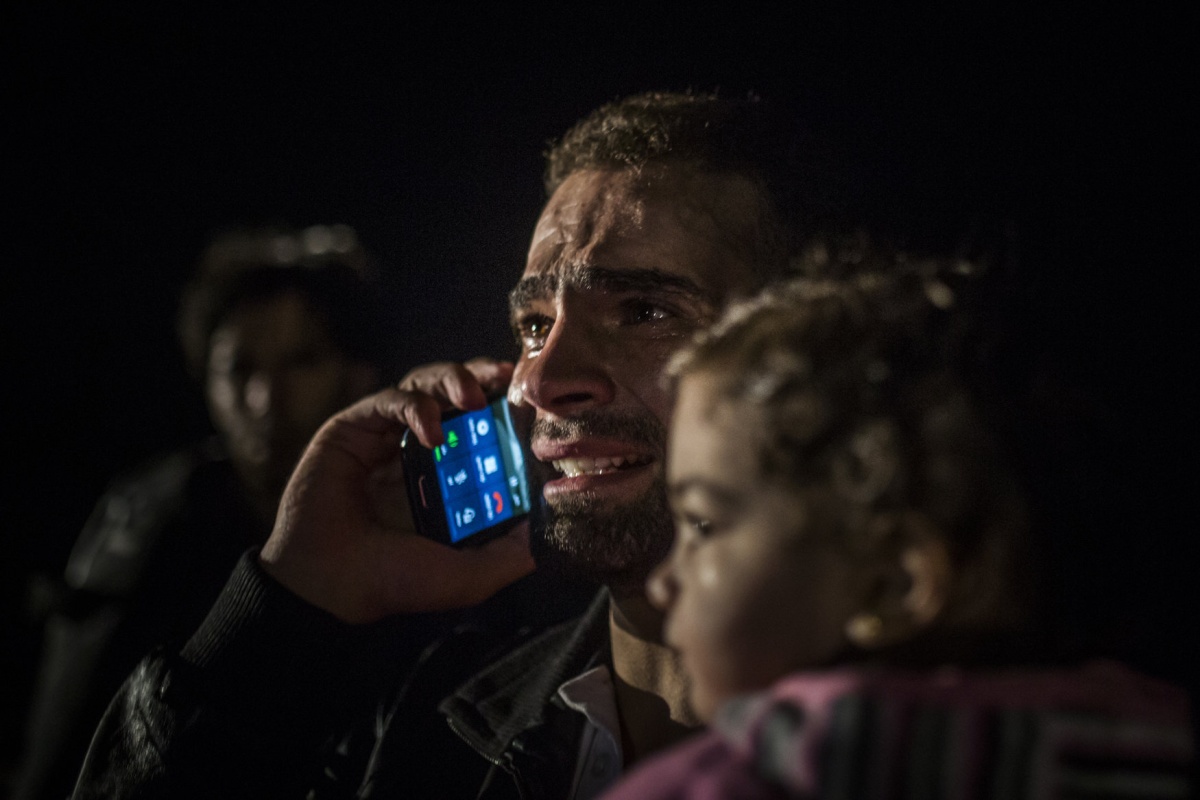 12
A man holds his daughter while making a phone call, immediately after his arrival with other migrants, by dinghy, from the Turkish coast to the north-eastern Greek island of Lesbos. October 8, 2015 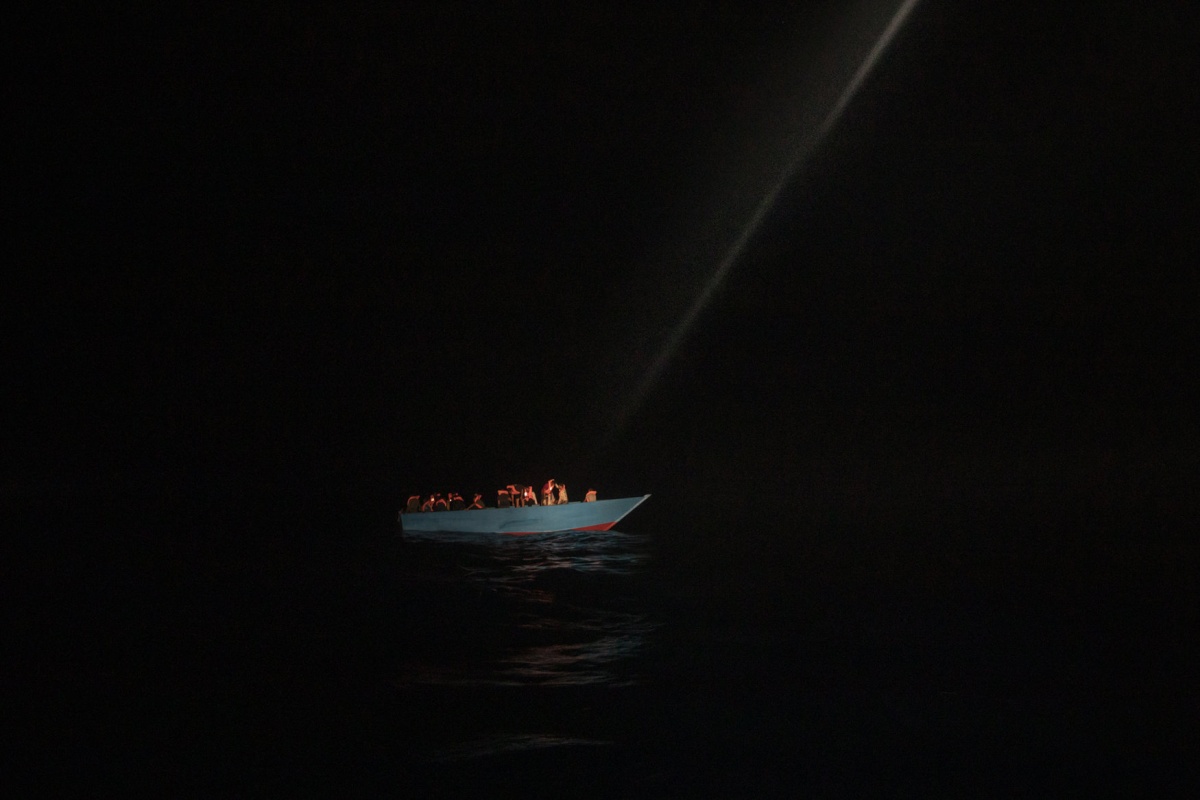 13
Migrants from Egypt, Morocco, Somalia and Sierra Leone, including women and minors, wait to be assisted by aid workers of the Spanish NGO Open Arms, after over 20 hours at sea, fleeing Libya on a precarious wooden boat. Tuesday, September 8, 2020 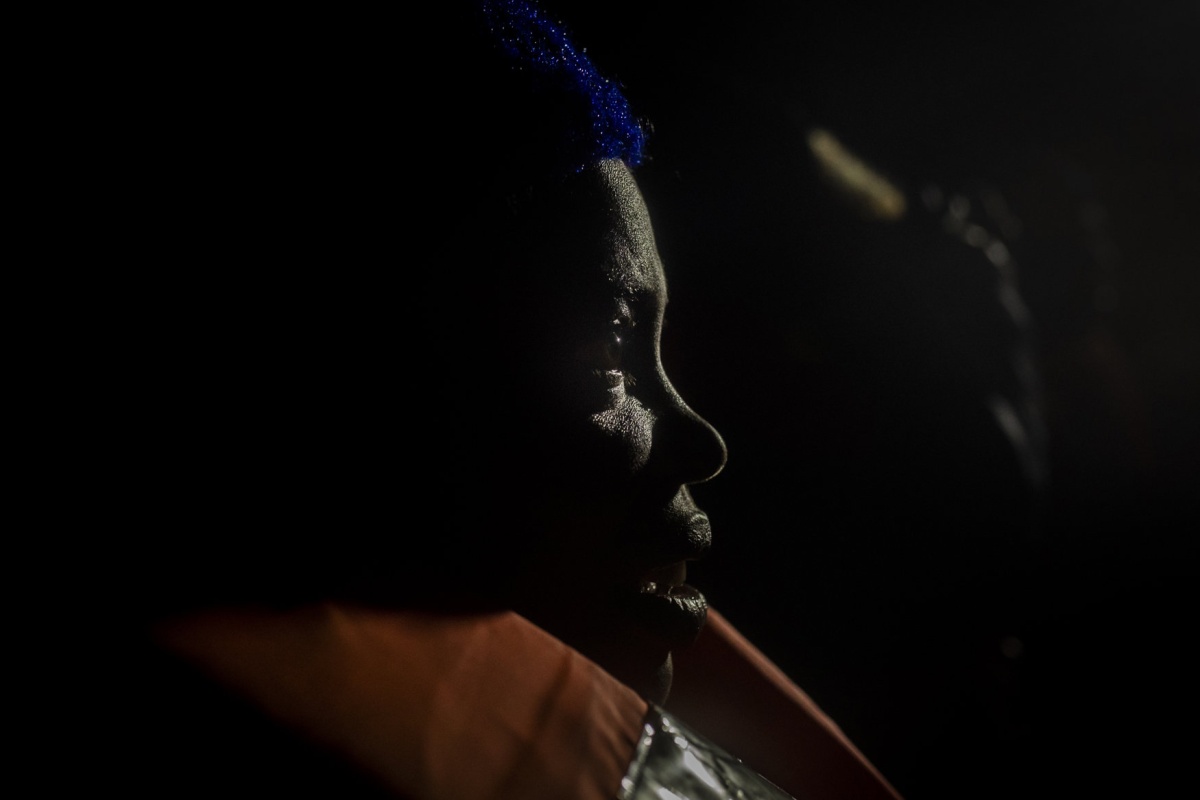 14
Wealth Peter, 34, from Nigeria, reacts after being rescued by aid workers of the Spanish NGO Open Arms from an overcrowded rubber boat in the Mediterranean Sea, off the Libyan coast. Friday, January 10, 2020 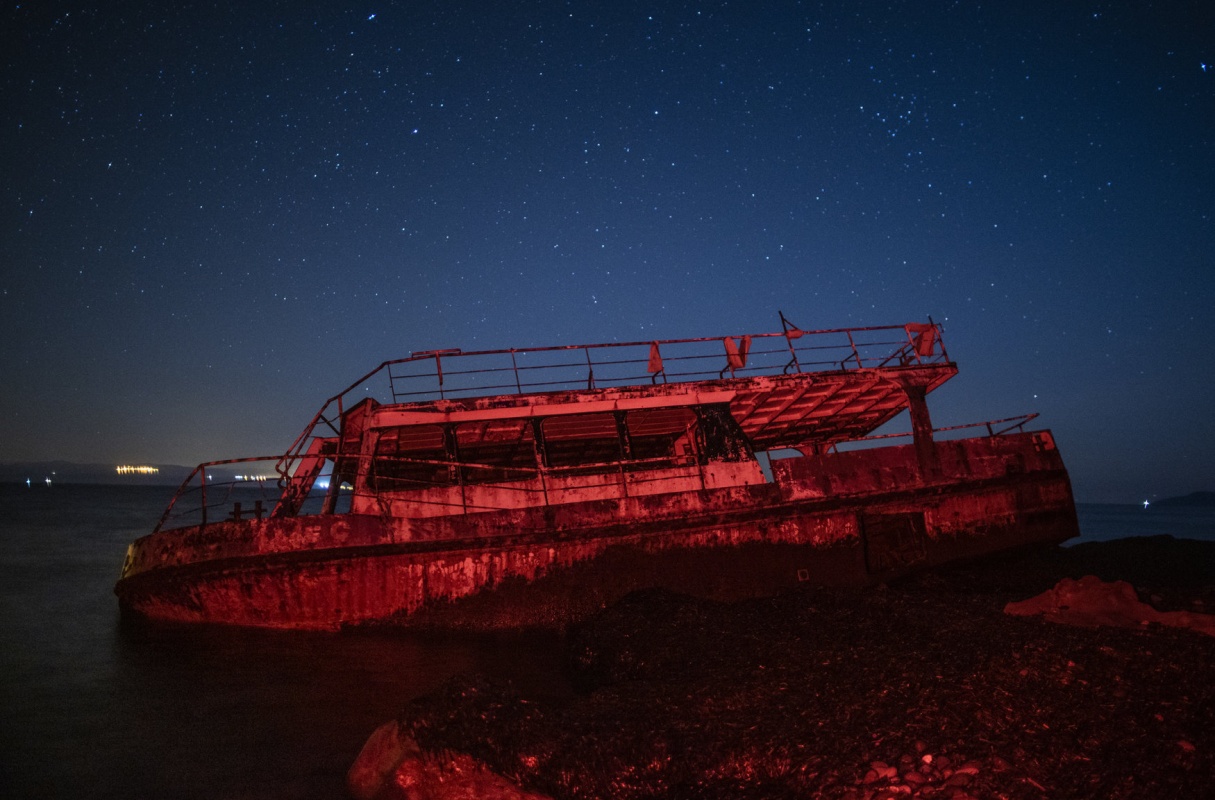