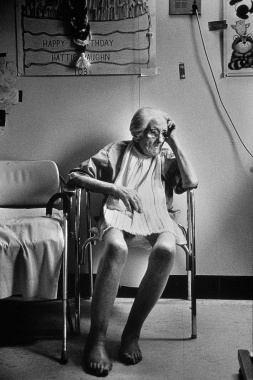 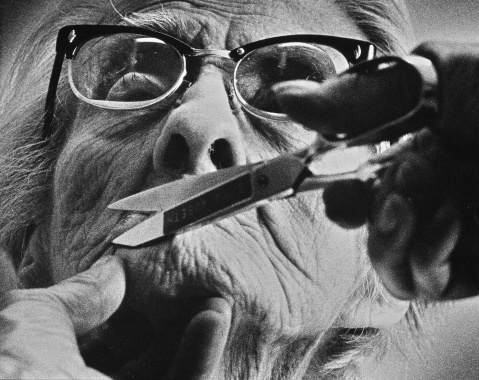 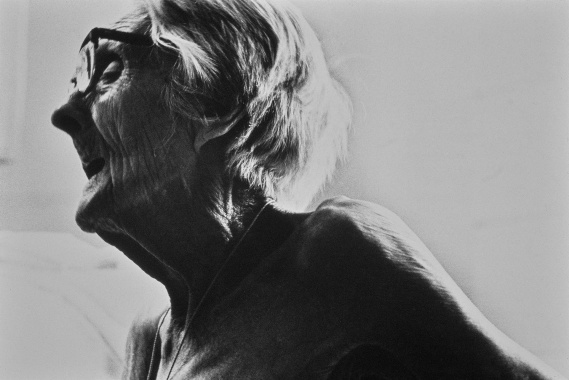 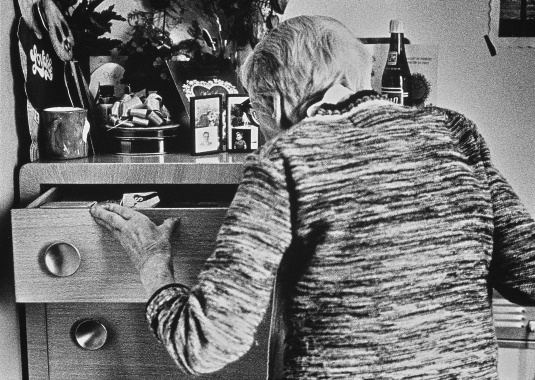 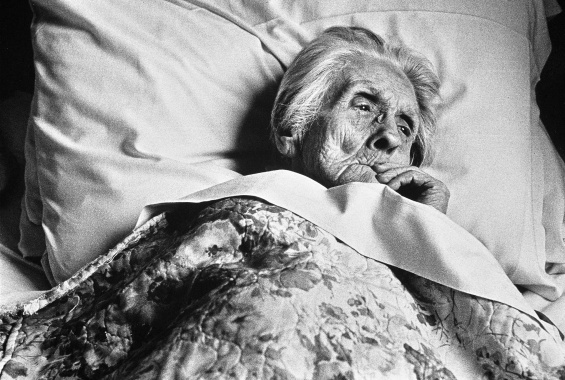 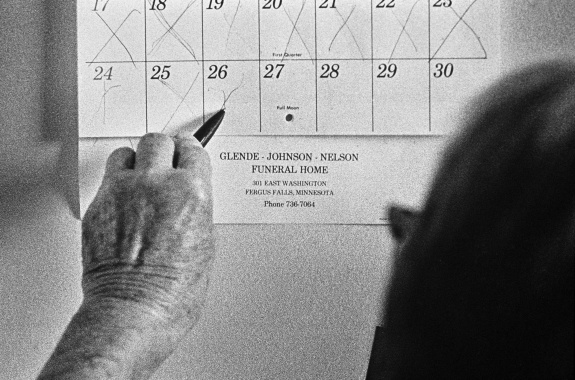 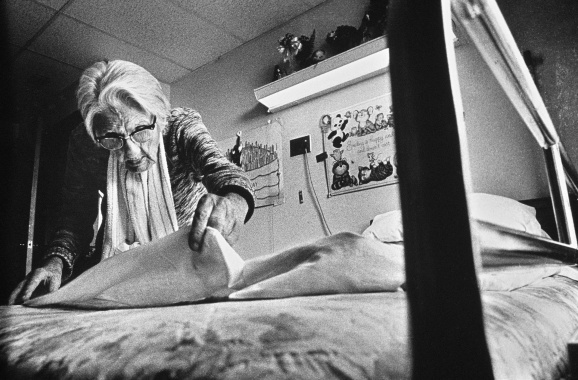 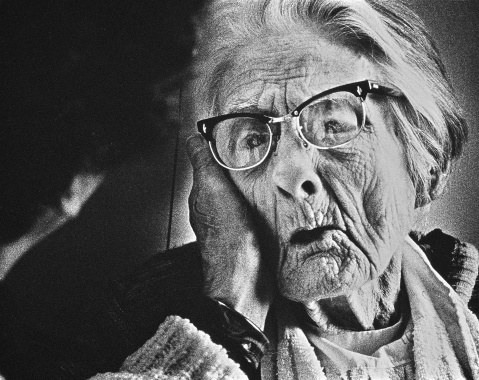 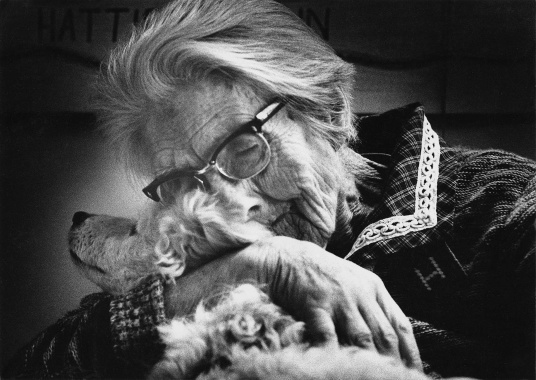 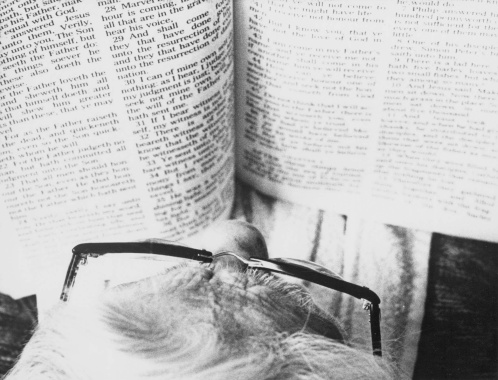 This award-winning series has only one protagonist: the 106-year-old Hattie Vaughn. With sensitive photographs, Stormi Greener – who was 37 at the time – captured the daily life of the centenarian at the old people’s home where she lived. The photojournalist’s black and white series convinced the Leica Oskar Barnack Award jury and, in 1984, Greener became the 5th recipient of the award.

Her daily routine begins the same way each day. Every morning, the old lady crosses out the date on the calendar that hangs, very visibly, on the wall of her small room in the old people’s home in Fergus Falls, Minnesota. The calendar is a gift from the local funeral parlour; and, in truth, this elder wishes for nothing more than the redemption of a peaceful death. After the many vital activities of a long life, Hattie is now limited to moving about in a few square metres; her daily tasks are clearly laid out, and there are few distractions to interrupt the days that seem to stretch out, endlessly. Virtually blind now, Hattie Vaughn can barely catch a glimpse of the world outside – a world she has no longer belonged to for considerable time.

“It hit too close to home. I was seeing my own aging parents. I was seeing myself. With the statistics on longer life, I made up my mind, during this story, that I didn’t want to live as long as these people had, in their condition.”

With her photo series, Stormi Greener documents Vaughn’s daily routine and little habits: how a lonely old lady tidies up her small room; how she looks at the few belongings she still keeps, as mementoes of her life; and how she reads the Bible, using her glasses and a magnifying glass. The reportage offers intimate glimpses of a lonely life; yet there are also treasured moments of close human interaction and care, as when one of the staff gives Vaughn a manicure, pedicure or plucks the hairs off her chin. A less frequent highlight is the visit of acquaintances who bring along their small dog, which the old lady happily hugs. At the close of each day, Vaughn sits alone once more and waits for the caregiver to bring her to bed. Thus, another day comes to an end – a day as quiet and uneventful as all those that have gone before.

Hattie Vaughn’s story was published for the first time on June 26, 1983, in the Sunday family supplement of the Star Tribune. Greener had been working as a photographer there for six years, at the time, and her work continues to be published in that newspaper to this day. Two years earlier, Greener had had the idea of documenting the daily life of the oldest persons in Minnesota. The idea developed into a five-month project that Greener worked on and completed with journalist Mike Kaszuba. Because Minnesota has no records of any of its inhabitants who were born before 1883, it was not initially easy to locate any centenarians. By doing extensive research into the old people’s homes in the state’s 87 communities, and in the Governor’s official birthday list, they finally managed to find over 100 centenarians. In the end, 14 of them were interviewed and presented in their daily lives.

“Being over 100 is completely different from ageing. It was hard to come to grips with the fact that these people don’t like the way they are.”

While documenting their stories, the photographer found that she had to revise her previous ideas about ageing. The play on words found in the title – “Milestone or Millstone” – reflects the ambivalence of the situation of elders in society today. Greener’s images cast a very precise and empathic eye on the truth of their lives. There were only a few of the elderly people who were actually satisfied with the life they led. The assessment of both journalists: “We found many people who accepted everything that life at that age means and can still look ahead to the next day. That is the achievement we should recognise most. There is plenty to admire about people who have made it into their second century.”

With 22 photographs, the largest portion of the Star Tribune’s nine-page article was dedicated to Hattie Vaughn. She took the photographer into her confidence and shared her daily life, over months. The result was a sensitive series; one that not only earned Greener the World Press Photo in the Daily Life category, but also fulfilled the criteria for the Leica Oskar Barnack Award, by perfectly expressing “the human element, and the relationship between people and their environments, with a keen gift of observation and with the greatest lucidity”.

“What I was trying to do was make people feel, as they were reading and seeing, the way I felt, as I was doing the story. Evidently, they did.” 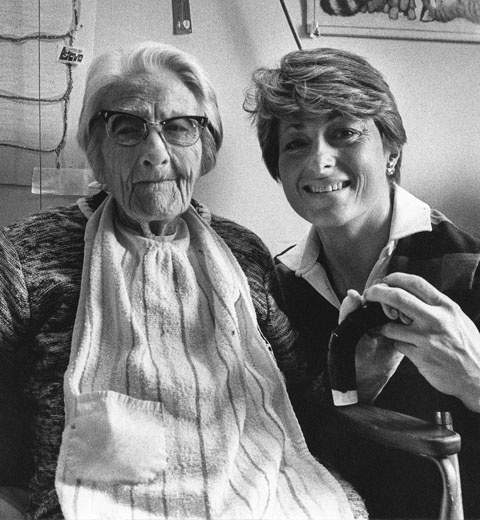 Stormi Greener was born in 1946. She attended Boise State University, and began her photojournalism career at the Idaho Statesman in 1975. She joined the Star Tribune, as a staff photographer, in 1977, and has worked there ever since. The focus of her work is upon documenting social issues in the USA, as well as during her many trips abroad. Scores of state, national and international awards document her career. Major awards include the Robert F. Kennedy Photojournalism Award, the World Press Photo Award, and multiple sweepstakes awards in the Inland Daily Photo and Minnesota Associated Press Photo contests. She has been a Pulitzer Prize finalist, twice.