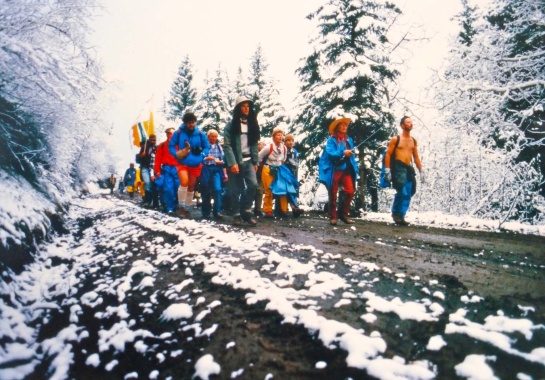 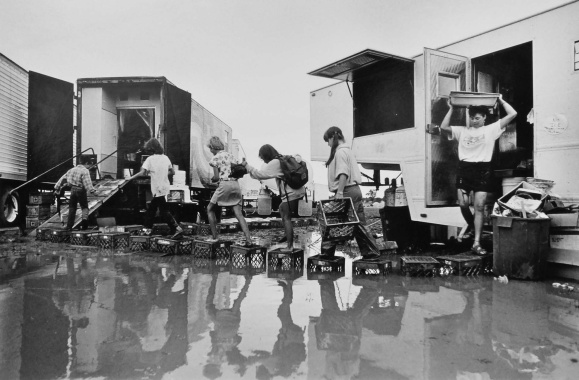 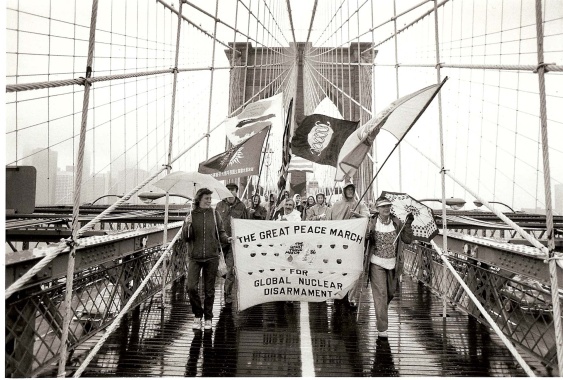 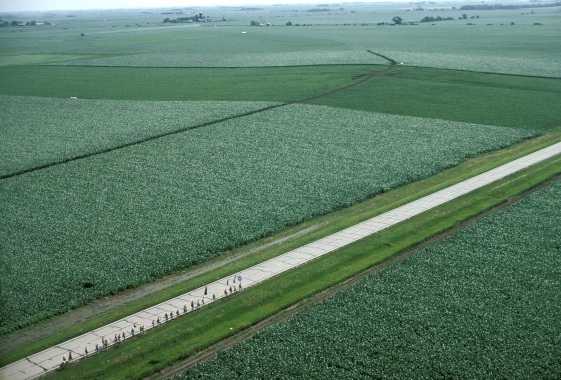 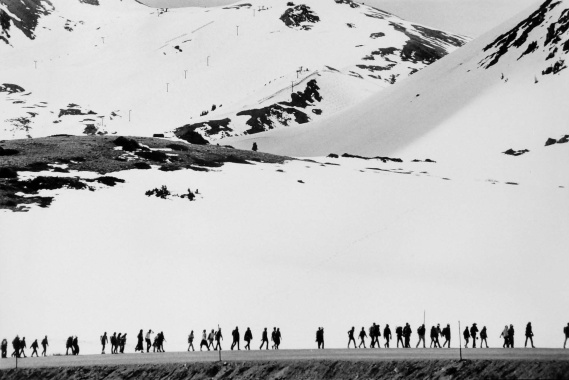 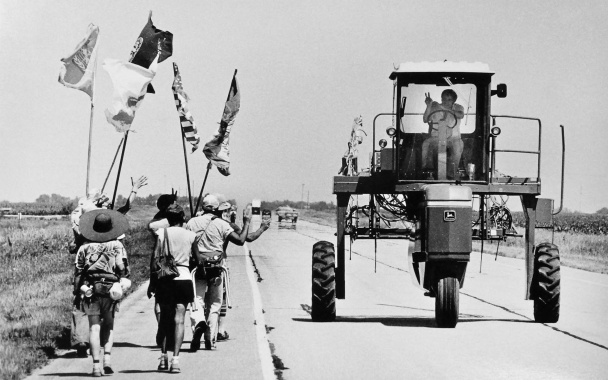 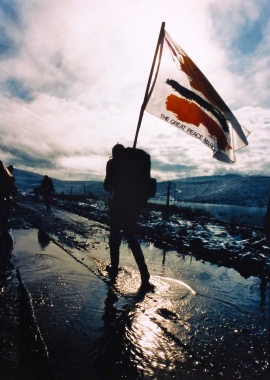 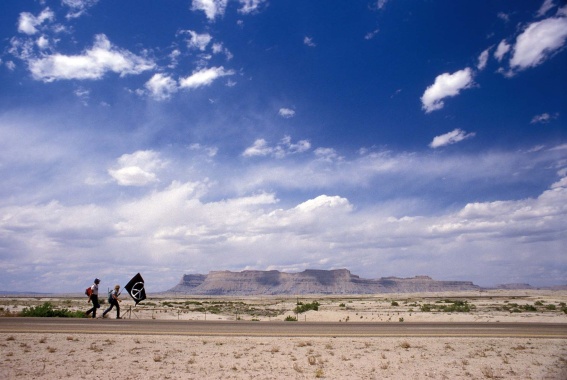 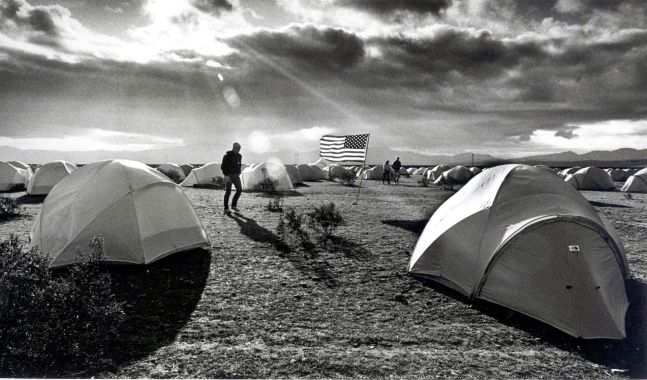 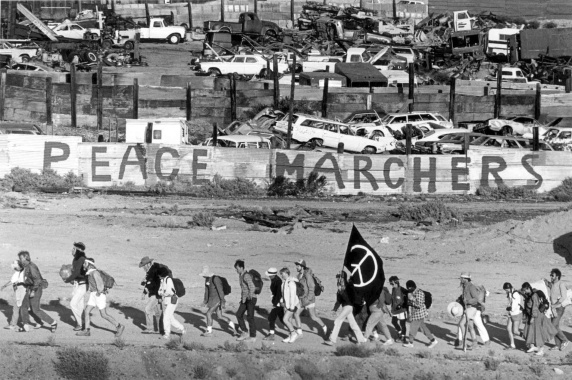 For his committed reportage on the Peace March that crossed the USA for close to nine months in 1986, the US American photojournalist Jeff Share became the eighth winner in the history of the Leica Oskar Barnack Award. He accompanied the march, up close and personal, for months. He was able to document the activists as they walked, their moods, and the conditions around them.

Close to 3700 miles lay in front of the roughly 500 Peace March participants, when they started out from Los Angeles, California, on March 1, 1986. Among them was the young photojournalist Jeff Share: “I was very impressed by the commitment of the people who were marching. They had voluntarily decided to give up everything else they were doing and join this protest march for nine months of their lives. I personally believe in the need to get rid of nuclear weapons and felt committed to leave my work at the Los Angeles Times to document this Peace March.” It was a courageous decision, because he not only gave up his regular free-lance work, but initially had to draw on his own savings to pre-finance his expenses. At first, there were few people or news channels interested in the story or in Share’s pictures. The general public’s awareness only grew slowly, not least thanks to the photographer’s work: he would regularly interrupt his march to fly to New York, where he would try and convince editors of the importance of the story. “After I had been photographing the march for about six months, there was finally some interest in the story. People Magazine was the first national publication to take a serious interest in my photographs. They published an eleven-page photo essay, using just my black and white photographs. It was a beautiful display and that encouraged other news organizations to publish stories about the march.”

“Winning the LOBA, and first place in the category News Photo Essay at World Press Photo, was wonderful. It gave me and my work more recognition and credibility amongst photojournalists.”

During the so-called Cold War, there was a worldwide arms build-up, in particular of nuclear weapons. At the same time, in the eighties, there was a growing awareness and commitment in opposition to the nuclear arms race, and in favour of worldwide disarmament. In addition to numerous protests, with hundreds of thousands of participants, there were more long-term activities; among them was the Great Peace March for Global Nuclear Disarmament, Inc. that was to be of particular meaning for the USA. After nine months of walking across the USA, the group reached their destination, Washington D.C., on November 15, 1986.

“It was a powerful experience to be with a community of 500 people, every day, who were so committed around a single issue. While there were problems and conflicts during the march, overall there was a strong focus on social justice and deep commitment to making the world a better place.”

The march was also a special experience for the photographer, which he still recalls, quite vividly, to this day: “There are so many memories. During the nine months of photographing the Peace March, I was most moved by the love and dedication these people demonstrated in their daily actions and in their relationships with each other. I am still in touch with some of the marchers. Many are still protesting and working for social justice, with many different causes.”

Social matters continued to be at the heart of Share’s work, over the following years. Another comprehensive essay was dedicated to children living in poverty. “That was another self-financed project that I worked on in the late eighties, early nineties. I spent years photographing street children in Mexico, Guatemala, Costa Rica, Ecuador, Brazil and Kenya.” Even after Share changed professionally, from photojournalism to education, he remained faithful to his social convictions and responsibilities. His numerous publications are clear evidence of his continued commitment.

“Everyone today is a photographer; so my advice is for professional photojournalists and anyone else who uses the camera in their cell phone. We need to recognise the power of photography to make a difference and improve the world.” 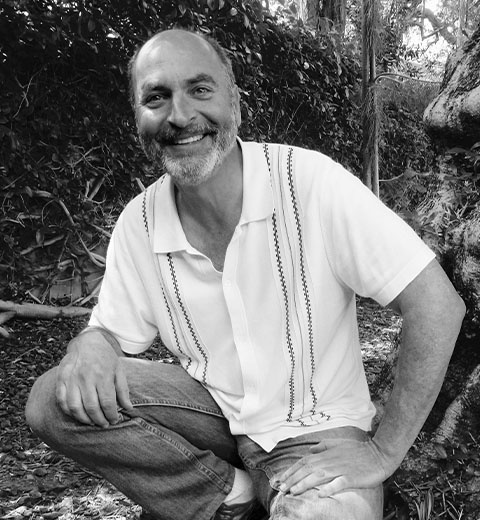 Jeff Share was born in the sixties. He worked for ten years as a freelance photojournalist, before he changed careers and moved into education. He has worked as an elementary school teacher, curriculum designer and trainer. He earned his PhD in the Graduate School of Education and Information Studies at the University of California in Los Angeles (UCLA). He currently works as a faculty advisor for UCLA’s Teacher Education Program, whereby the teaching of critical media competence is one of his most important topics.