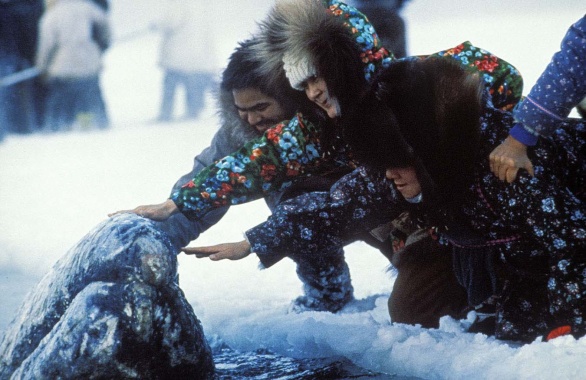 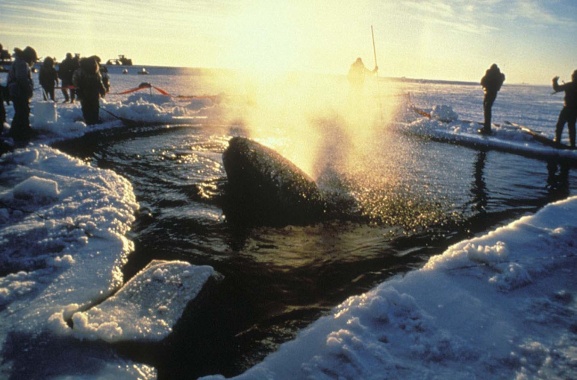 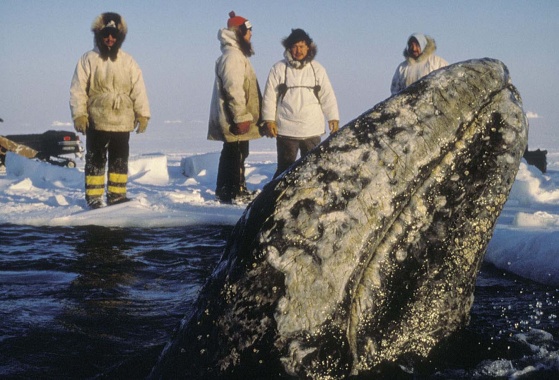 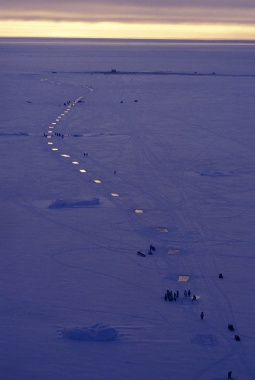 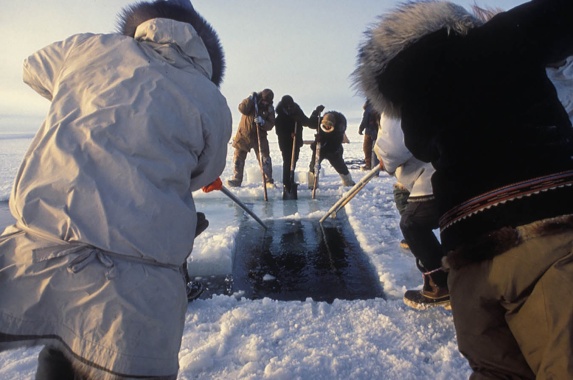 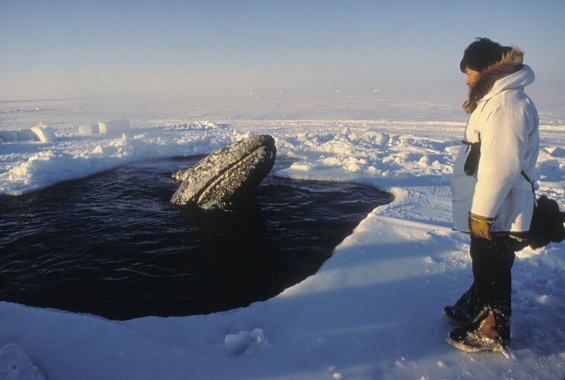 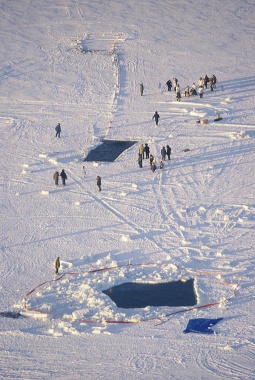 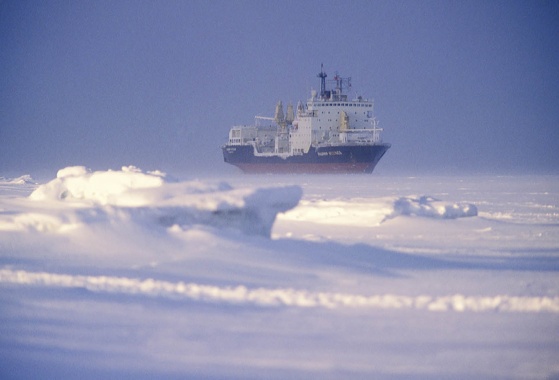 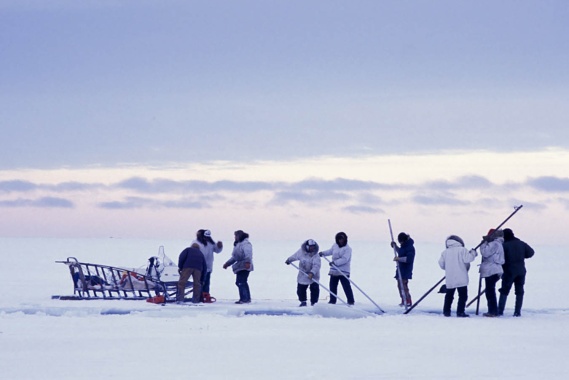 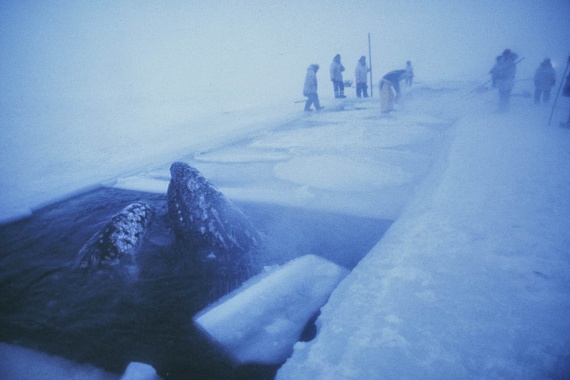 The rescue of three grey whales, in October, 1988, was a worldwide media sensation. Charles Mason spent eleven days close to the event, documenting the efforts being made to free the whales from the ice. His photographs, taken under extremely tough conditions, were published around the world and earned him the 1989 Leica Oskar Barnack Award.

It was a dramatic rescue operation that had the world holding its breath for a couple of weeks: three already rare grey whales had been surprised by the early winter and were caught by drift ice in the Beaufort Sea, north of Port Barrow in the U.S. state of Alaska. The ice was blocking them from reaching the open sea, about eight kilometres away. By the time the news first reached the national press in mid-October, the indigenous Iñupiat had already spent a week trying to ensure the whales survival, by using chainsaws to cut breathing holes in the enclosing ice. In addition, they were attempting to cut a channel to allow the whales to move out to sea. However, it was only with international help that the rescue was finally achieved on October 28.

“In the end though, I was there for eleven days, covering the story – all day, every day. It was amazing to be involved with this rescue effort, to document it, to receive the publications and make the photojournalism connections that came as a result. I cherish the experience and the memories.”

Mason had recently started working as a photographer for the Fairbanks Daily News-Miner, where he had previously worked, before studying. Though only five hundred miles away, his editors hesitated at first to send a photographer to the scene of the event. Mason quickly recognised the story’s potential. He decided to document the situation in Barrow, at his own cost and risk. Luckily, his expenses were later covered by the renowned photo agency Black Star, which urgently needed pictures from Alaska, and already knew the photo reporter’s work. Equipped with a thick parka jacket, heavy boots, fur hat and special camera equipment borrowed for the occasion, Mason got onto a plane. The photographer remembers today: “The next thing I know, I’m landing in Barrow, after a short one-hour flight from Fairbanks, full of trepidation that the story might be over before I got there. Maybe the hole had frozen over. Maybe the whales had disappeared. Maybe I’d wasted a lot of effort and $600.”

As it actually worked out, he spent eleven days at the location, reporting on the rescue effort. The biggest challenge was keeping the Nikon cameras functioning in the ice-cold air. In his series, Mason documented every stage of the operation: he captured helpers sawing through the thick layer of ice; the whales coming up to breath at the air holes; Iñupiat stroking the hurt and exhausted whales; and the breaking open of ice channels. He took aerial pictures of the series of air holes; and he photographed the Russian icebreaker, Admiral Makarov, that ultimately opened up the passageway through the Arctic ice, allowing the whales to reach freedom. One of the whales died from exhaustion, and from wounds caused by the sharp edges of the ice; but the other two managed to make their way to the sea. In the end, the total monetary costs for Operation Breakthrough amounted to over a million dollars. As a result of the criticisms of scientists, the international press became interested in whales and the loss of their habitat, which also led to reopening discussions about whaling.

“Alaska is an amazing place, full of interesting people who all have a story, it seems. The landscape, like that of Denali, is just world class. Its open spaces and vastness are unrivalled. I’ve loved living here, raising two children here, photographing here, and making it my home.”

Mason’s pictures were published in Time and Life, as well as numerous other international magazines, making this series one of the more important of his life. He has continued publishing many reportages on Alaska, over recent decades, and recalls: “For a long time, almost anyone I met knew my photos of the whales. Being in on this story of world interest for those eleven days was amazing. The huge number of publications worldwide, and the awards, were wonderful. Being that close to the whales, with the job of documenting them, was unforgettable. I am proud of what I did up there, even when I look at the photos today. It’s definitely one of the stories of my career.”

“Photographically speaking, Alaska has offered me many story opportunities. I have been all over the state, and covered fishing, reindeer herding, homesteading, the oil spill and many other stories, over the years.” 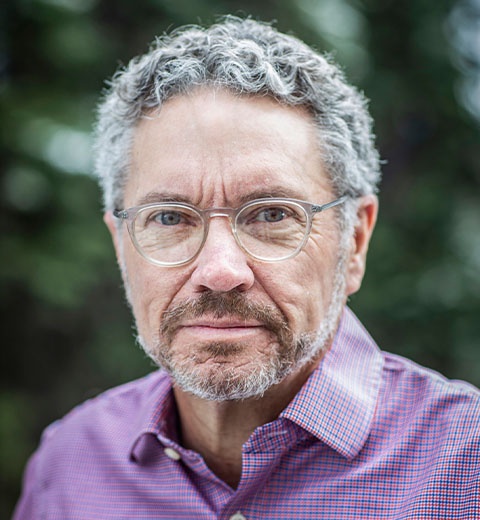 Mason picked up a camera for the first time in 1970, when he was 11 years old, and has been photographing ever since. Following his studies at Washington and Lee University, he moved from Virginia to Alaska in 1984. After working for the Fairbanks Daily News-Miner for a few years, and completing his Masters in Documentary Photography at Illinois State University, he has been a Professor of Photography and Photojournalism at the University of Alaska in Fairbanks, since 1990. In addition to teaching, he has completed numerous photographic projects.