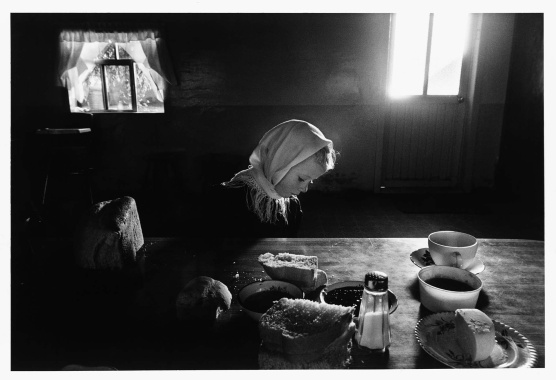 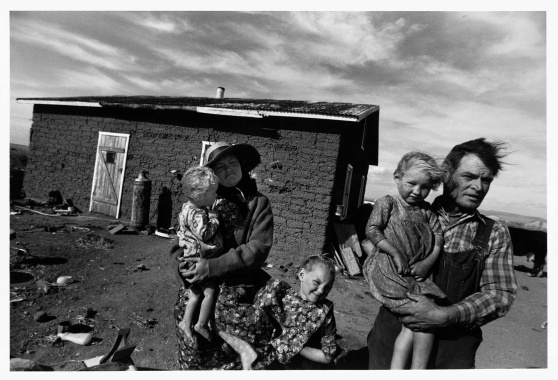 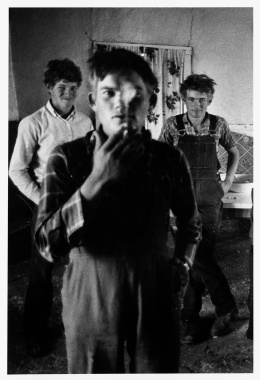 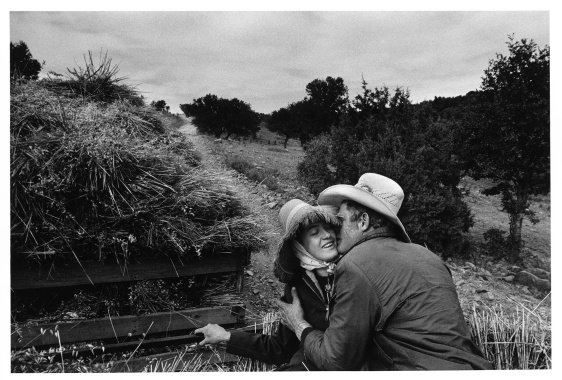 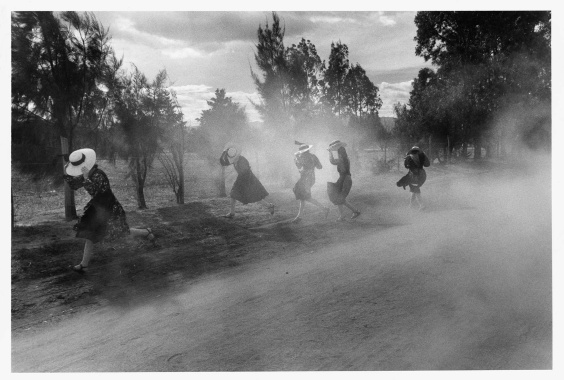 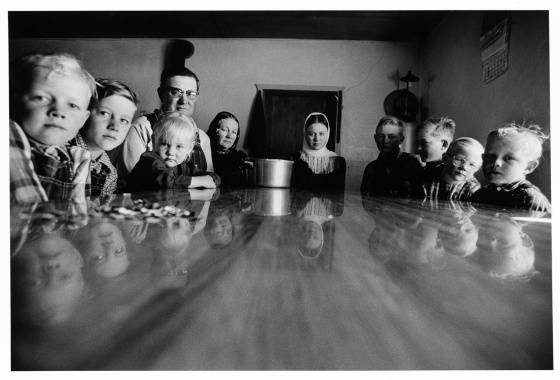 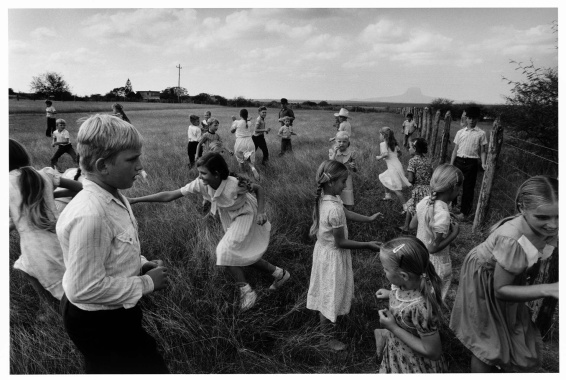 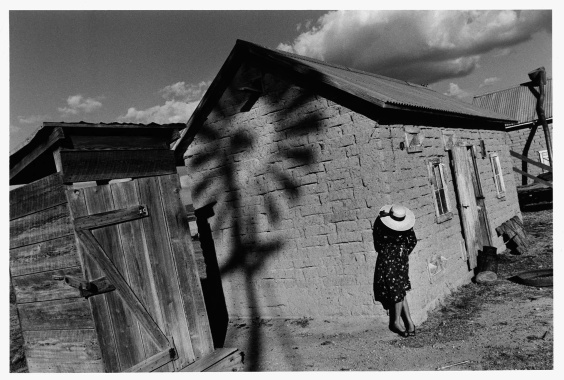 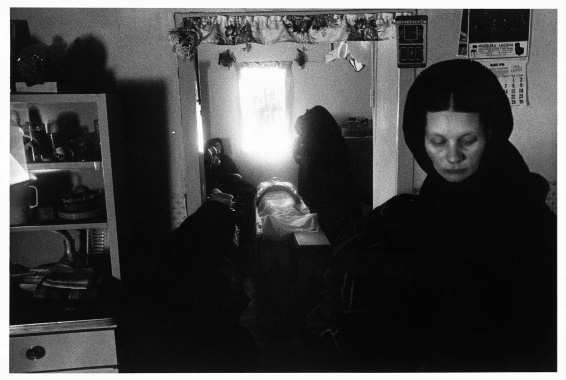 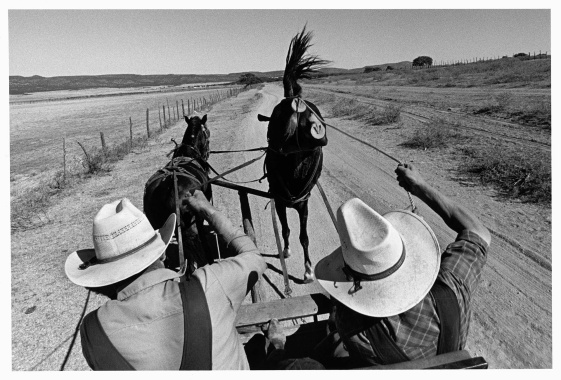 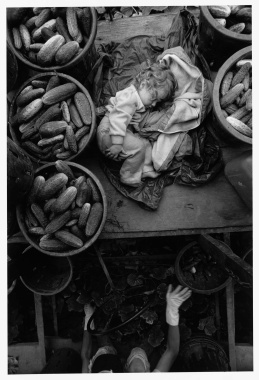 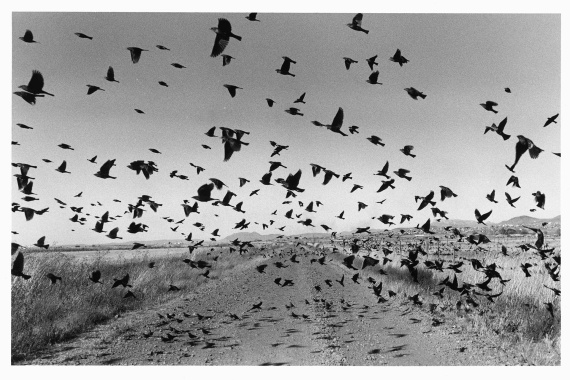 They emerged from the Baptist movement and follow strict rituals, living pretty much cut off from the rest of society. In the early nineties, thousands of Mennonites lived in Mexico; however, the tough challenges of the economy there obliged many of the men to head back to the USA and Canada as seasonal workers. That was where Larry Towell met them.

The images seem to belong to another era: women wearing black knee-length skirts, aprons and straw hats with a wide brim; men wearing dungarees and a shirt. In the 1920s, “Old Colony” Canadian Mennonites decided to move south and settle in Mexico. Decades later, necessity obliged many of the men to return north as seasonal workers; yet they were unchanged, wearing the same type of clothing and as devout as ever. At the beginning of the nineties, Canadian photographer Larry Towell came across them in his own backyard, in rural Ontario. “I found them without looking for them, really,” he explains. “They were harvesting cucumbers and tomatoes in the vegetable fields around me.”

The “Old Colony” Mennonites are a particularly conservative group within that religious community. 30 years ago they still lived according to strict religious and communal rules, virtually completely isolated from the rest of civilisation. In their settlements in Mexico, cars, electricity, tractors and contacts with the outside world were forbidden; as were newspapers, radio, cameras or television. Conditions at the time in that country were more than tough; the economy had collapsed and earnings from agricultural produce were low. This incited many of the men to travel back to the USA and Canada to earn a bit more income as seasonal workers. “They’d historically set themselves apart from society, but were being driven north by economic necessity and landlessness. And what does a landless farmer become, but a migrant worker?” Towell explains.

“They came from colonies where vehicles, electricity, rubber wheeled tractors, and contact with the outside world through newspapers, radio, magazines or TV – including modern conveniences like cameras – were not allowed.”

After meeting the Mennonites in the fields of Ontario, the Magnum photographer decided to work on a documentary about them. “I liked them, so they liked me, and they let me photograph them,” he says. They invited him to accompany them to Mexico; and together, they drove across America in a decrepit old car – which was normally forbidden within their community. During that journey, Towell captured images of their communal life – documenting meagre farms and tough working conditions in the fields, as well as Sunday worship and festivities. His pictures bear witness to an existence of suffering, poverty and strict behaviour; yet also of love, children, family and belonging. Towell’s photographs capture apparently fleeting moments, yet have the feeling of compositions made up of light, shadows and contours, like gentle poetry in black and white. When speaking about his photographic approach, however, he likes to say: “I don’t have a style at all. I just photograph what’s in front of me.”

In 1996, Towell won the LOBA for his series on the Mennonites. “My career was just beginning, really,” he remembers, “so it gave myself and the project some recognition.” Today, he is considered one of the best photographers in the world. His pictures appear in publications such as Life, the New York Times, Esquire and Geo. His book titled “The Mennonites” has been out of print for a long time, which is why he was recently holed up on his farm for a week, working with a publisher on plans for a new edition. Thirty years have passed since Towell’s first encounter with members of the Mennonite Free Church; he continued working on the project over ten years. By the time he had completed it, the traditional settlements in Mexico had changed; they now had electricity and trucks. “Some (Mennonites) have remained behind in Canada, but most went back home,” Towell reports. “I don’t see them any more… it seems so long ago.” There is one thing of lasting importance, nevertheless, that he says he learned from them; and that is patience… and working slowly. 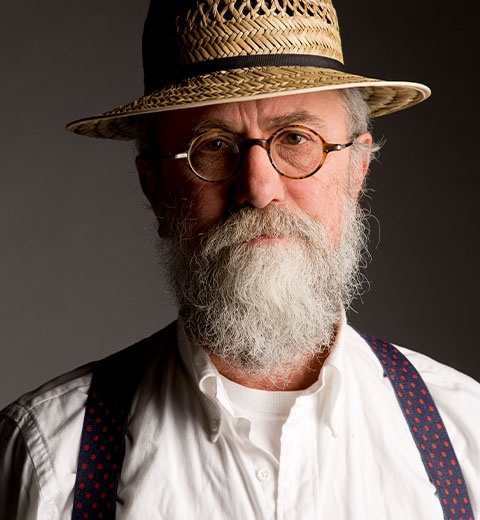