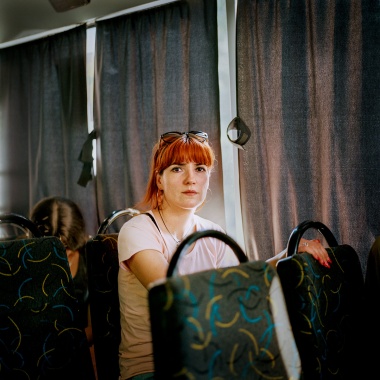 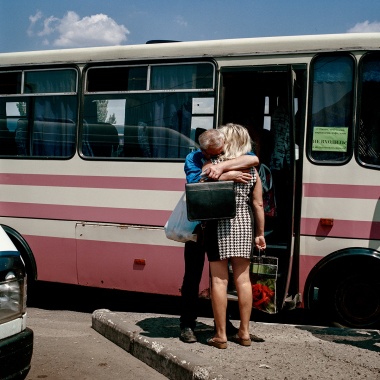 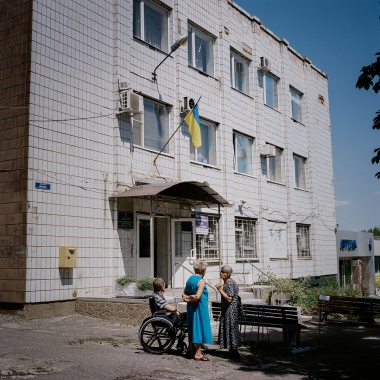 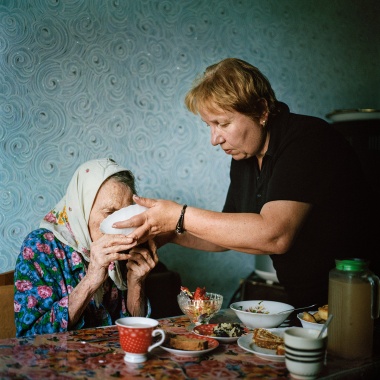 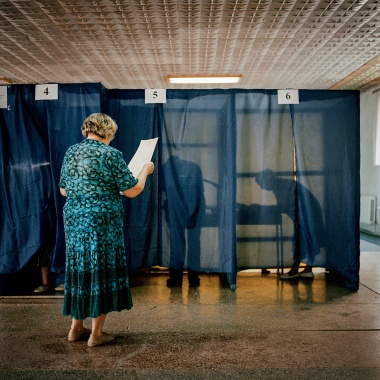 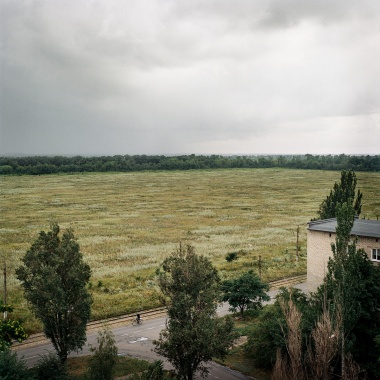 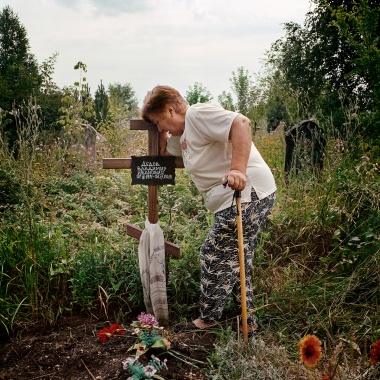 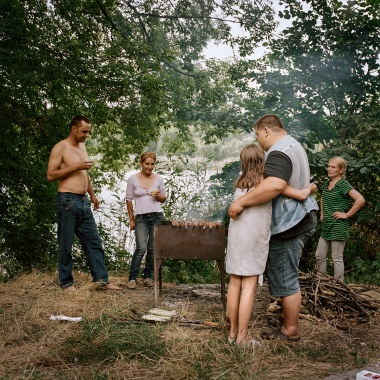 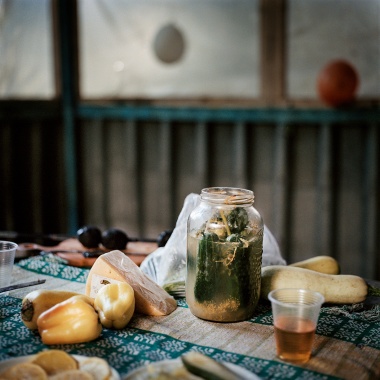 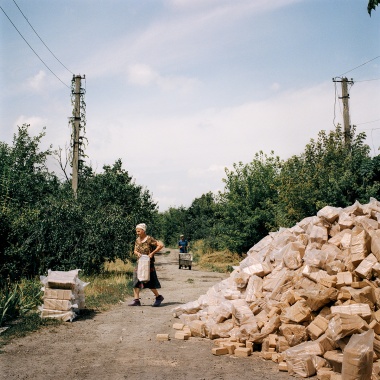 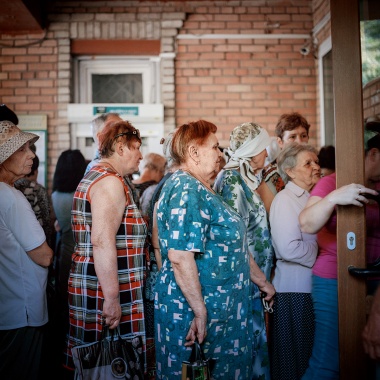 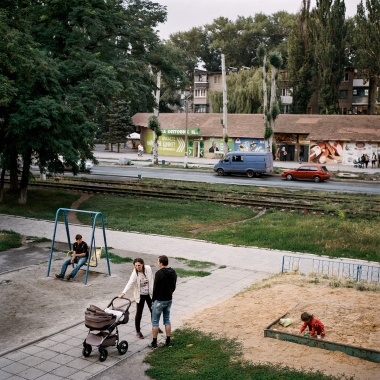 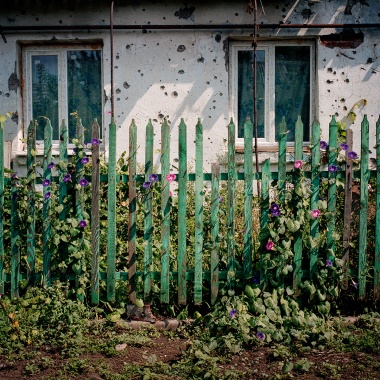 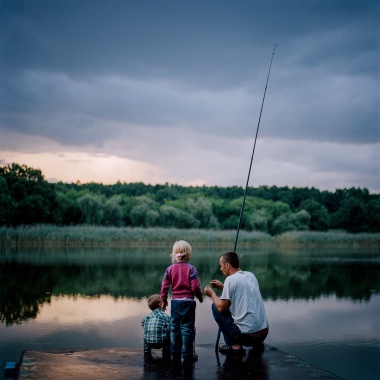 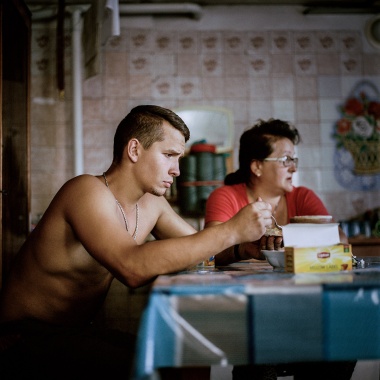 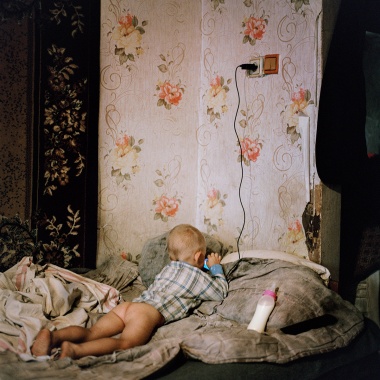 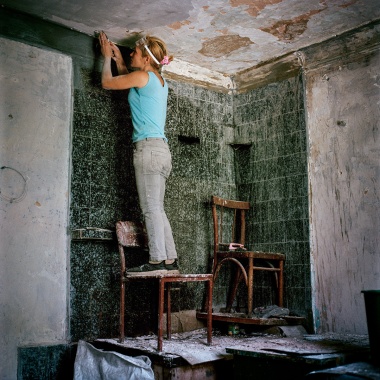 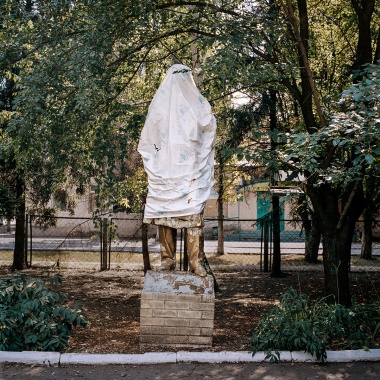 Anastasia Taylor-Lind – 5km from the Frontline

Her approach to this series is cautious and gentle, Anastasia Taylor-Lind explains. With this attitude, she has travelled and continues to travel regularly to Ukraine; she visits the same families, spending time and listening to them. The resulting images reflect closeness and life – even though the story unfolds in the shadow of war.

The Ukrainian flag is divided into two hopeful colours: blue, symbolising the sky; and yellow, for corn. Ukraine was once known as the breadbasket of Europe, with kilometres of golden fields stretching across the country. The Crimean Peninsula was a paradise for summer holidays -- a dream of palm trees, vast expanses and the Black Sea. Today, Russia once again rules over Crimea; and in eastern Ukraine the regular army and the separatists have been fighting against each other for six years – a war that the rest of the world has virtually forgotten. “My challenge is to find ways to keep talking about the conflict and the people whose lives it affects, despite the lack of international editorial interest,” Taylor-Lind explains. “I document the civilians living along the frontline in eastern Ukraine to show how life goes on, and how people find ways to live, in spite of the infrastructure being destroyed, the heavy military presence and their communities being divided by the frontline.”

“It is our job as journalists to convince publications that this is an important story and that it still needs to be told.”

A family grills Shashlik by the water, a couple rock their baby to sleep at a playground, and a father goes fishing with his children. The first impression is that Taylor-Lind’s pictures are capturing a perfectly normal summer. The local residents go about their lives, spending time with friends or relatives. Yet nothing is as it seems, because their lives are marked by war, just like the shelled and crumbling houses where they live. For the roughly six million people living in communities along the frontline in eastern Ukraine, war is part of everyday life; just a few kilometres away from the shellfire, they suffer from its devastating consequences. Children grow up knowing that the threat of landmines lurks everywhere around them. In many villages there are no grocery stores, money machines, post offices, or medical care. In one photo, a mother stands at the grave of her son, who was inadvertently killed when he found a hand grenade. In another, a woman waits at an election centre to hand in her vote. Thus, the “5km from the Frontline” series speaks of both loss and awakening, of adversity and adaptation. “Human beings are resilient, and people find ways to live in the toughest situations,” says Taylor-Lind. “In Donbass, life very much carries on, but not as normal – people still get married, raise children, cultivate the land, and start new businesses.”

Last year, the photographer spent two weeks travelling in the region, together with the journalist Alisa Sobokova: this series is just a part of a joint project they have been working on for six years. During that time, they have been trying to present these people, so impacted by war, in a humanistic and empathic way, avoiding any cliché-like images that might define them as fighters, refugees, separatists or victims. Many of their protagonists have become friends; and Taylor-Lind points out that, through her many encounters, she has come to understand that war is not like we think it is from photos, movies or books. Rather, as she says: “War looks like an ordinary day – most days – until it very briefly does not.” 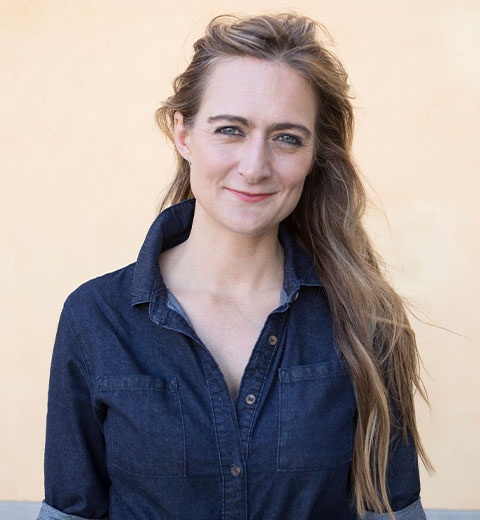 Anastasia Taylor-Lind was born in Swindon, England in 1981, and now lives in London. As a photojournalist, she has been published in renowned magazines, including National Geographic, Time, The New York Times, The Telegraph and Geo; and her work has dealt with wide-ranging subjects, among them women, population and war. She has been travelling to Ukraine for a number of years, where she documents the impact of the Russian-Ukrainian conflict on the civilian population in the eastern region of Donbass. Her first book, “Maidan – Portraits from the Black Square”, deals with the Ukrainian revolution at Independence Square in Kiev, in 2014, which brought about the change of government.